For months now, Delta Air Lines CEO Ed Bastian has appeared regularly on cable TV news trying to convince the public it is safe to fly.

“Getting on a plane is safer than in a car or getting in an Uber or ride-sharing or any other form of public transportation. We’ve proven that over time,” he said on CNN last month. “I am 100% confident it is safe to be on air travel.”

Half a year into the coronavirus pandemic, Bastian points to longstanding evidence that you’re more likely to die on the way to the airport than aboard a plane. Airline executives also highlight sophisticated air filtration systems, enhanced cleaning like electrostatic spraying between flights and face-mask requirements. Delta is among a few carriers also keeping middle seats empty for more spacing.

Many would-be passengers remain extremely wary, convinced that packing into a cabin and breathing the same air with dozens or hundreds of other people for hours is the opposite of safe during a pandemic. U.S. airline traffic is only about a third of what it was before the virus scrambled travel plans.

The answer appears to be somewhere in between: Flying is not as unsafe as many Americans fear, but not risk-free.

Walking through an airport and getting on an airplane requires more of a leap of faith than before COVID-19. Data and studies are still scant, and experts disagree on the relative safety of a plane, car or office.

The Centers for Disease Control and Prevention says airplane ventilation systems filter and circulate air frequently, so that “viruses and other germs do not spread easily on flights.” But the agency notes “social distancing is difficult on crowded flights, and sitting within 6 feet of others, sometimes for hours, may increase your risk of getting COVID-19.” It also flags the risk of close contact with other people in airport terminals or when going to or from the airport.

As for flying or driving, “There’s no straight answer what’s safer,” said Emory TravelWell Center Director Henry Wu, a professor specializing in infectious diseases, adding it depends on the trip, including its length, where you’ll be stopping and other variables.

“The plane may be one of the safer places, in the sense that the air filtration and the sanitization on the plane is outstanding,” Wu said. “But, you don’t have total control over who you sit near, and there could be other issues like airport lines or crowds at baggage claim.” 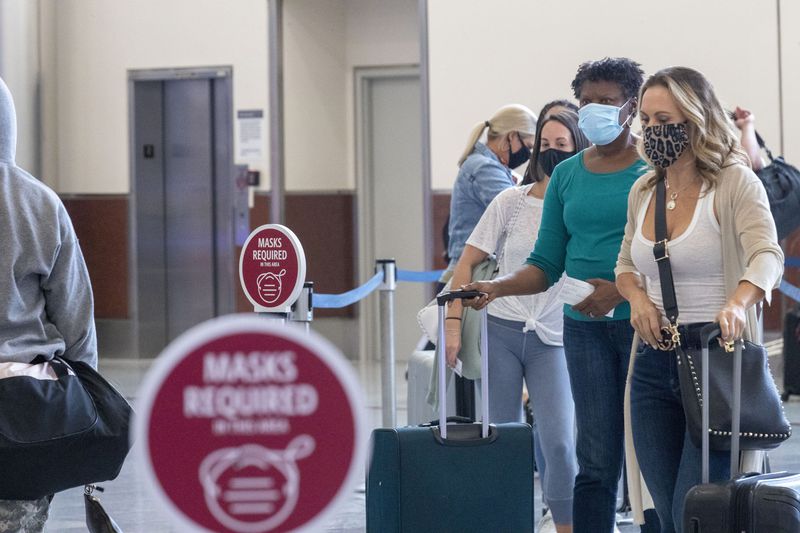 Atlanta more exposed to air travel than most; little data on infections

A lot hangs in the balance, including Americans’ health, with roughly 200,000 U.S. coronavirus deaths already. Last year, U.S. airlines carried a record 925.5 million passengers who took to the skies for work trips, vacations and visiting friends and family.

The stakes are particularly high in Atlanta, home to the world’s busiest airport, which injects billions of dollars and thousands of jobs into the local economy, from restaurants at airport terminals to hotels and conventions in the city. Delta alone employed more than 36,000 people in Georgia at the start of this year, but is cutting back its workforce due to the continued weakness in travel demand.

The Association of Flight Attendants said more than 1,000 of the nation’s 120,000 flight attendants have reported testing positive for the virus, with a lower infection rate among those who are working than not. The infection rate appears to be lower than the nearly 3% rate for Georgia’s population as a whole. But the flight attendant tally was based on voluntary disclosures, and the number could be higher. 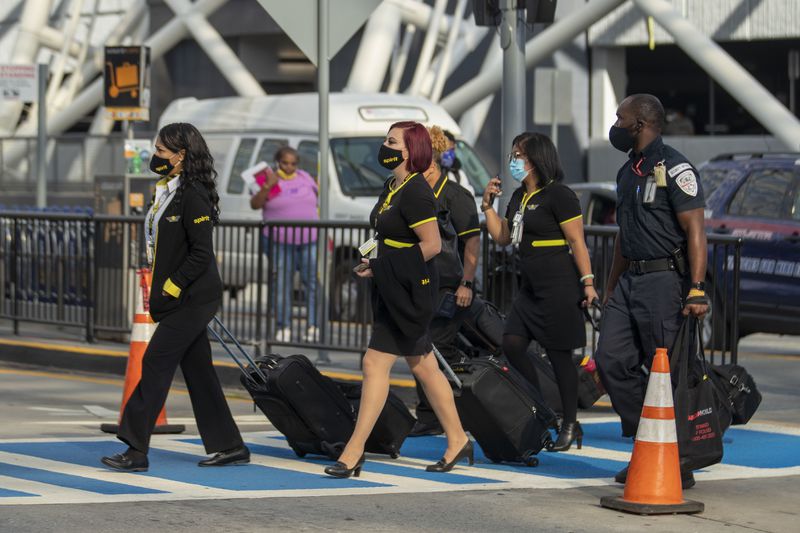 Atlanta-based Delta, the dominant airline at Hartsfield-Jackson International Airport, recently began testing its employees for COVID-19 after disclosing in June that 500 of 90,000 employees had tested positive. But it hasn’t disclosed how many more have tested positive since then.

There is even less data on infection rates among passengers. There is no broad tracking of where all COVID-19 patients contracted the virus — something that would be hard to pin down with any certainty.

HEPA filters and middle seats at center of safety debate

Airline executives have highlighted their use of HEPA — high-efficiency particulate air — filtration systems that have been common on large planes for years and are similar to those used in hospital operating rooms. Air is circulated vertically, from vents in the ceiling to intake vents in the floor, instead of spreading across the cabin.

On planes with HEPA filtration, half the air goes through the filters that remove 99.9% of particles, including viruses, and half the air is coming from the outside, according to Delta. On its planes without HEPA systems, cabin air is refreshed fully with outside air.

Air on all planes is recirculated “as often as every 2-6 minutes,” making air on flights “many times cleaner” than in places like restaurants and grocery stores, according to the Atlanta airline. It also is upgrading air filtering systems for jetbridges and parked planes with LEED Platinum MERV14 filters, which it says will reduce air particles by 40% during boarding and deplaning.

Southwest Airlines, the second-largest airline at Hartsfield-Jackson, says all of its planes have HEPA filters, with air completely exchanged on average every three minutes.

So does that make it safer than working in an office?

Michael Saag, a University of Alabama infectious disease professor who has consulted with Delta on an unpaid basis, said the air flow on an airplane is much better than in an office, “so in some ways the aircraft is ‘safer.’”

But Saag noted there still would be high risks for travelers less than 6 feet from others without masks, and that it can be harder to maintain distance on planes than in offices, including when passengers crowd into aisles when disembarking. 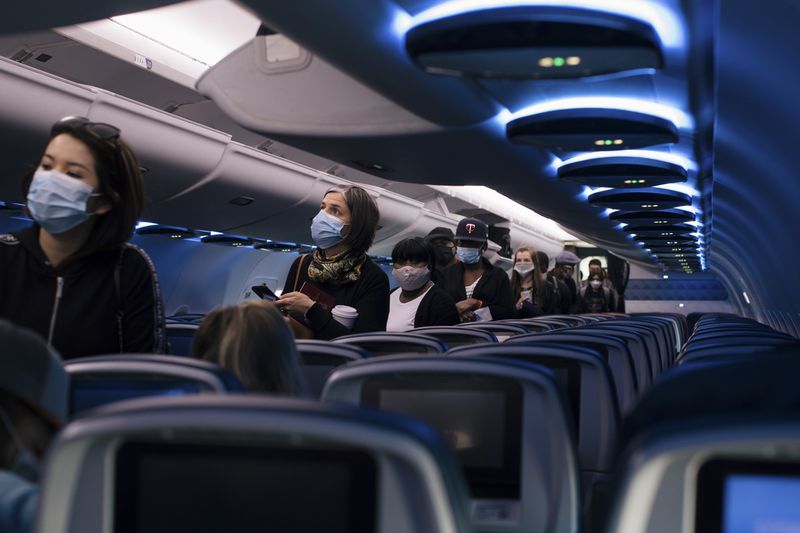 And Purdue University Professor Qingyan Chen, a building science specialist who has studied airline cabin ventilation, believes the risk of flying is higher than being in an office for the same time because per-person ventilation rates across ground transportation, airport terminals and planes are lower than in buildings. COVID-19 also is “released continuously through breathing, talking and coughing,” so a passenger could get infected before cabin air is cleaned by HEPA filters every few minutes, he noted.

To increase social distancing, Delta says it will keep middle seats empty through Jan. 6, part of a plan to cap occupancy in the main cabin at 60% through Sept. 30, then at 75% through Jan. 6. Bastian, the CEO, said surveys indicate blocked middle seats are now the No. 1 reason customers choose Delta.

Some other airlines including Southwest are blocking middle seats for at least a few more weeks but United and American, Delta’s two biggest U.S. rivals, aren’t. A United spokesman called the blocking “a PR strategy” and “not a safety strategy” because it doesn’t create six feet of distance, CNBC reported. Airlines also have said they could not make a profit over the long term with such a policy.

But Delta cites medical experts saying more distance makes a difference. Federation of American Scientists President Ali Nouri wrote to the CEOs of United and American, urging them to keep the middle seat open because “your decisions to book flights to capacity place your crew and your passengers in excessive danger.”

Airlines say masks are a key factor in reducing the spread of the virus, and have banned passengers who refuse to wear them. They require health acknowledgment forms in which passengers must agree to mask requirements and attest they do not have COVID-19 or its symptoms. Carriers also are emphasizing their sanitization of planes and airport areas. 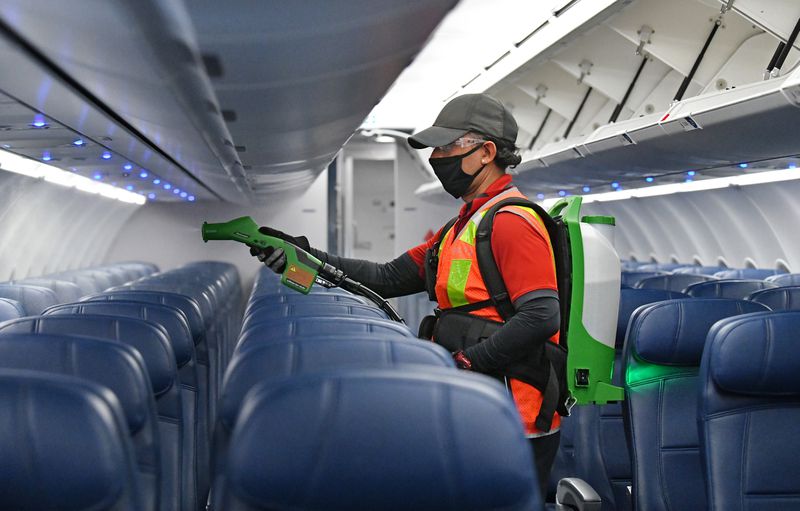 The CDC says the coronavirus is thought to spread mainly through close person-to-person contact, but also that “Airports, bus stations, train stations, and rest stops are all places travelers can be exposed to the virus in the air and on surfaces.”

Much of the science is still up in the air, though, with researchers trying to better map how the coronavirus travels on airplanes and elsewhere.

A study released by the CDC of a March 31 flight from Milan to Seoul found that a woman tested positive for COVID-19 after the flight while in quarantine. She wore an N95 mask on the flight except when using the lavatory. “The most plausible explanation,” according to the study, was “that she became infected by an asymptomatic but infected passenger while using an onboard toilet.”

Another study published by the Journal of the American Medical Association of a March 9 flight from Tel Aviv to Frankfurt found among 102 passengers, seven tested positive for COVID-19 on arrival. A few other passengers tested positive in the weeks following, including two likely transmissions on the flight, or before or after the flight. Both suspected transmissions involved passengers seated within two rows of someone with the virus. The rate “may have been reduced further had the passengers worn masks,” the study said. 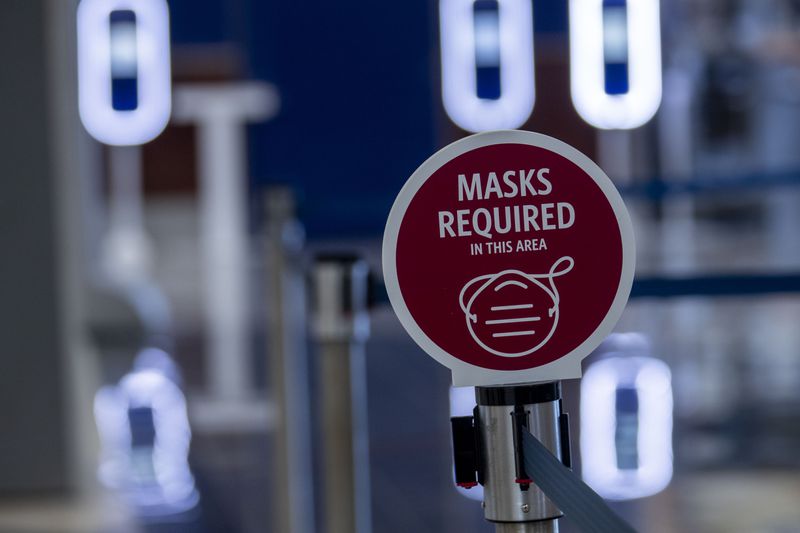 In a non-peer reviewed article, an MIT professor of management science and statistics estimated the risk of death from COVID-19 contracted on planes ranges from 1 per 400,000 to 1 per 600,000 passengers. That, he estimated, is a “considerably higher” risk than from plane crashes, but comparable to two hours of everyday activities during the pandemic, based on data including seat occupancy and infection rates in the general population.

The airline industry, along with airports and aviation manufacturers, are sponsoring more research through the Harvard T.H. Chan School of Public Health. An initial report suggests universal use of surgical masks on airplanes could reduce infection risk from respiratory particles to less than 1%, compared to 3.69% without protective measures.

“We’re hoping this independent assessment will hopefully validate what we’re doing,” said Nicholas Calio, president of Airlines for America, an industry group. “We want people to be confident about traveling again.”

In the meantime travelers will have to weigh their appetite for risk with less information than many would like — something that has become increasingly common during the pandemic, and not just aboard an airplane.

“This is why this coronavirus is so exhausting,” said Marie Helweg-Larsen, a psychology professor at Dickinson College and an expert on personal risk assessment. “There is no way of putting all these facts into a formula and arriving at the absolute correct decision.”