As soon as it became clear the coronavirus was a serious public health threat, Trinity Community Ministries and the men who lived there went into lockdown mode.

At the transitional shelter for homeless men in downtown Atlanta, that meant no visitors, no one leaving to go to work during the day and no more Friday fish fry events. Everyone got tested, part of a citywide push to test every person living in a homeless shelter. At Trinity, all of the tests came back negative and for months they had no cases.

“To some extent, I think that caused us to relax more than we should have,” said Anita DeMyers, the executive director at Trinity.

But in July, one resident tested positive for COVID-19, DeMyers said.

The rest of the men quickly got tested, and by that point, “every one of them came back positive,” said DeMyers said, who estimated there were about 15 men living at Trinity at the time. Three staff members also tested positive. 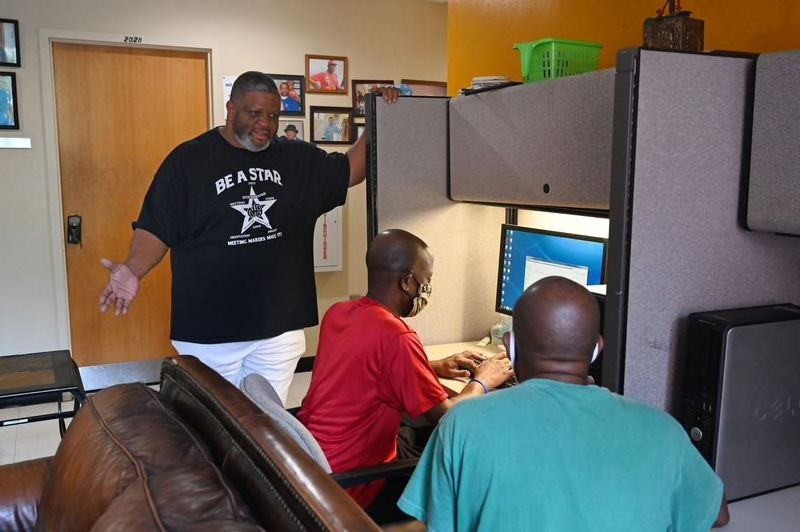 For the most part, Atlanta’s homeless population has not been hit as hard by COVID-19 as one might imagine, largely because of aggressive precautions and early testing initiatives, experts said. But six months into the pandemic, the outbreak at Trinity shows that shelters with communal spaces and a vulnerable population remain at risk and still face unique challenges in trying to stop the spread of the virus.

Throughout the city, shelters have largely avoided major outbreaks like the one that hit Trinity, said Jack Hardin, the co-founder and chairman of the Gateway Center, which operates a large shelter on Pryor Street downtown. Many local homeless shelters have seen cases — Hardin knew of one that had seven at one time — but he said new city funding and coordinated testing and isolation efforts have kept the numbers lower than expected.

“We really were planning for a much bigger problem,” said Hardin, who also co-chairs the Regional Commission on Homelessness. “We just got ahead of it.”

Most of the residents and staff members at Trinity who got COVID-19 were asymptomatic, DeMyers said. A handful had mild to moderate symptoms, and one resident had severe symptoms and was treated at Grady Memorial Hospital, inside the overflow treatment area at the Georgia World Congress Center. He recovered there for about four weeks and returned to Trinity last week 100% better, DeMyers said.

She’s still not sure how the virus got into the shelter. In July, Trinity was still not bringing in new clients and restricting where its residents could go. But DeMyers said the men may have relaxed the social distancing protocol in the shared eating areas. People also sometimes came inside to do work on the historic downtown building, which is just off Auburn Avenue and used to house Hanley’s Bell Street Funeral Home.

Since the outbreak, the shelter does regular top-to-bottom cleanings, requires masks throughout the building (unless residents are in their individual rooms) and screens every visitor who comes into the shelter.

“Our doors are locked,” DeMyers said. “We can’t relax, and we can’t take anything for granted.”

Over a five-week period in April and May, as the number of COVID-19 cases grew in Georgia, Mercy Care and the Fulton County Board of Health set out to test every person in Atlanta’s homeless shelters and many of those who were unsheltered. Of the 3,800 homeless people tested in the city during that period, 38 were positive for the virus, Hardin said. Since then, the positivity rate among Atlanta’s homeless population has remained at about 2%, which is lower than the state average, he said. He and other homeless providers were originally worried the infection rate could get as high as 40%.

“We really were planning for a much bigger problem. We just got ahead of it.”

– Jack Hardin, co-founder and chairman of the Gateway Center

During the Trinity outbreak, Partners For Home, a nonprofit that leads the city’s homelessness strategy, helped house the infected residents at a hotel so they could remain isolated and contain the outbreak, DeMyers said.

While the shelter she runs has been able to remain locked down to minimize contact between residents and the outside, larger ones like the Gateway Center have continued to take in residents. More than 200 people regularly stay the night at Gateway, Hardin said. Like other shelters, they have cut down their capacity to allow for more distancing and implemented strict protocols for mask-wearing and hand-washing. They continue to test for coronavirus.

For now, the strategy to prevent further outbreaks like the one at Trinity is simply to “keep doing what we’re doing,” Hardin said. “We know what to do.”