Shonte Smith’s sister has been lying in a hospital bed since August, kept alive by a ventilator.

The teacher from Emanuel County was taken to an Augusta hospital when her bout with COVID-19 turned too serious for the local hospital, Smith said, and she blames the Emanuel County school system for her sister’s condition. Her sister was unaware of the extent of coronavirus infections in her middle school because the district has been secretive with the information, Smith said. “They never report anything.”

Around Georgia, groups of parents and teachers are criticizing what they see as a dangerous trend. Although some school districts publish detailed data about coronavirus case counts, others reveal little or no information.

Emanuel County Schools southwest of Augusta started putting counts online last week after The Atlanta Journal-Constitution asked why they were not published. District officials say they were already planning to post the information. The data shows districtwide rather than school-level case counts, a practice parents and family members like Smith say doesn’t help determine the safety of their particular school.

“They could all be at one elementary school. They could be all over. We just don’t know,” said Judy Kreps, who leads a group of concerned residents in Lumpkin County in the mountains north of Atlanta, where the reporting format is similar to Emanuel County’s. South of Atlanta, in Houston County, parent Caly Hess is leading a similar band of concerned residents. The school district there publishes reports about case counts and identifies affected schools, but doesn’t reveal the number of cases at each affected school.

“They’re obfuscating the data to make the district look better than it actually is,” Hess said.

Parents and teachers say they need more detailed information to gauge the risk in their schools. Researchers could use the data to spot patterns and trends with COVID-19. 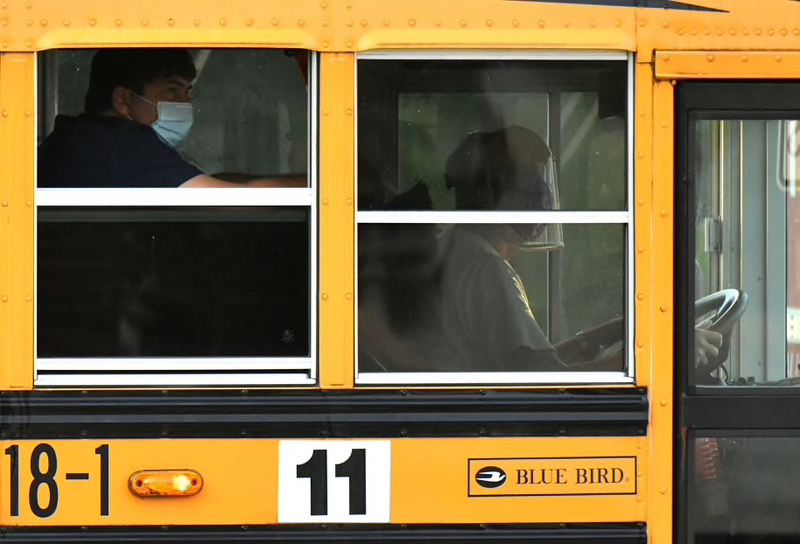 In late August, the Georgia Department of Public Health asked every school in the state to start sending weekly reports about infections, clusters of infections and related quarantines in each school. As of Friday afternoon, the agency had not posted the data on its homepage.The agency last week did release new information about the coronavirus and school-aged children, though, showing schools were the lead source of coronavirus “outbreaks” from Sept. 6 to Sept. 12, responsible for 39 of 93 of them over that period.

Experts disagree about whether those counts are subject to public disclosure.

Phillip Hartley, a lawyer whose firm represents many of Georgia’s school boards, said federal laws protecting the privacy of student and patient records could prohibit the release of the numbers, especially for smaller schools where he said a numerical report could help someone guess who was infected.

“There’s no right of the public to know how many people, how many students how many staff” are infected or affected by coronavirus in a school, he said. That’s just the legal question around public release of the data, he added. “Whether it’s a good idea or not is another issue.”

Open government advocates say public health trumps privacy and disagree that the law allows withholding the numbers in the name of privacy.

“The number of COVID cases is almost certainly not going to be traceable to an individual,” said Frank LoMonte, director of the Brechner Center for Freedom of Information at the University of Florida.

LoMonte said the federal laws protecting medical records won’t apply to a school unless it is billing for medical services, and he said the privacy protections for students protect central office records about them, not aggregated numbers. An exception would be if a release of the numbers included narrowing details, for instance reporting that two students of Filipino ancestry have COVID-19 in a school with two students of Filipino ancestry.

Nonetheless, at least one school district has said the numbers are shielded from disclosure by privacy laws.

Dr. Jason Hatcher, a father in Houston County, has been peppering his school district with open records requests using the state open government laws and recently sought the new data being sent to the state health agency. The district responded that the information was “protected” by various state and federal laws, including those shielding student and patient records from public release. The district added that it didn’t have the data anyway because officials submit it to the state through an online portal. “There is no weekly document, form, or print report available,” the Sept. 14 letter to the physician said.

A district spokeswoman told the AJC that Hatcher could ask the state for the data. (The AJC filed a request for the statewide data Sept. 9.)

Gwinnett County Schools, the state’s largest school district, sees no privacy problem. The district publishes a report on its websiteeach weekday revealing the new case counts at each school, with the number of people in close contact with the infected employee or student.

In Atlanta, administrators are working out the details for a public report that includes everything they are sending to the state health agency. Atlanta Public Schools spokesman Ian Smith has not heard of any privacy concerns. “There’re no names associated with it. It’s numbers,” he said.

ExploreCoronavirus in the classroom: How much will schools reveal?

In Emanuel County, Superintendent Kevin Judy said he sees no legal reason not to release school-level data, but said he chose to publish districtwide data because that’s what other districts had been doing.

Judy said it would be easier if the state public health agency published all schools’ data. That would make it consistent across the state. “There’s just so much varying information,” he said. “It would be nice if we all put out the same information. So everyone can compare apples to apples.”

Deanna Ryan used to teach science at one of Emanuel County’s schools. She recently switched to a nearby district but still lives in Emanuel, and attended a recent school board meeting out of concern about the spread of COVID-19 and the schools’ reporting of it.

She said her former colleagues told her a half dozen teachers with classrooms in the same hall at that school were infected.

“My concern is that they’re underreporting the number of COVID cases within the school system,” she said.

Judy, the superintendent, said he could neither confirm nor deny whether six middle school teachers had tested positive for COVID-19.

Ryan said Tuesday that she’d heard encouraging news about her friend from that school, Shonte Smith’s sister. A nurse had entered her room, and she had nodded in recognition.

That was over a week ago, though, and Smith said Thursday that her sister has been lying in bed with her eyes open, but not tracking anything since then. The nurse told her she’d been unable to get her sister to nod again.