By Alexis Stevens – The Atlanta Journal-Constitution

A young woman is pinned to the ground Wednesday, Sept. 23, 2020, as she is arrested by Georgia State Troopers in front of the Georgia State Capitol Building in Atlanta. Demonstrators received a three-minute warning before arrests took place. 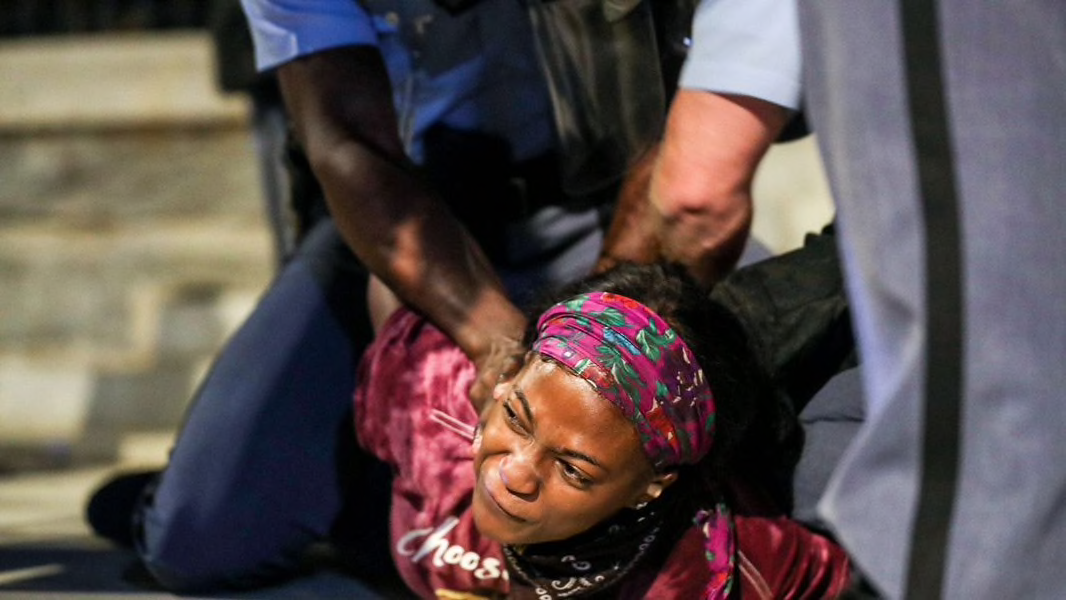 A crowd grew to about 200 Wednesday night when a rally changed to a march from Woodruff Park to Peachtree Street and to Atlanta police headquarters. From there, marchers headed back toward the park and later the state Capitol, where there were tense moments between some protesters and members of the National Guard.

Shortly before 10 p.m., in an effort to disperse the crowd near the Capitol, state troopers deployed spray around protesters that brought tears.

Earlier Wednesday, a former Louisville, Kentucky, police officer was charged in connection with the March killing of Taylor, whose shooting death in a botched drug raid sparked national outrage and months of protests. Taylor was 26.

Former Louisville Metro Police Department Officer Brett Hankison, who was fired in June, was indicted on three counts of first-degree wanton endangerment for shooting into neighboring apartments on the night of the raid. His bond was set at $15,000.

But some believed there should have been a murder indictment. The Atlanta rallies were peaceful, with some officers seen monitoring the crowd.

At Cleopas Johnson Park in downtown Atlanta, Jared Sawyer of the Tired Movement read the names of the three police officers who were involved in the Breonna Taylor incident. Approximately 50 people gathered at the park, some holding signs with Taylor’s name.

Deja Bellard of Atlanta said she hadn’t planned to come to the protest. But she did anyway, saying she is “tired of people of color dying.”

Bellard, a Black trans woman, said Taylor’s case was treated differently because she was a woman.

“I just want it to stop,” she said of police violence against Black people. “I need it to stop.”

“I just couldn’t understand how a (grand) jury can come to that conclusion when she was just a sleeping civilian,” Ortega said. “I’m hoping this gets a little attention and hoping the officers get their justice because they took an innocent life. Police officers shouldn’t escalate situations as fast as they do.”

Jamal Harrison Bryant, senior pastor of New Birth Missionary Baptist Church in Stonecrest, criticized the indictment of just one of three police officers who fired into Taylor’s apartment by saying it “underscores the importance of exercising your right to vote and elect officials who will hold all people equally accountable.”

“This is an empty indictment that serves as yet another miscarriage of justice and a slap in the face to the family of Breonna Taylor,” he said.

Bryant was one of the speakers at the recent anniversary of the March on Washington during the National Action Network-led protest billed as the “Commitment March: Get Your Knee Off Our Necks.”

10:15 p.m.: A handful of protesters were arrested by troopers.

10:10 p.m.: Trooper have told the protesters they have 3 minutes to leave the area.

9:55 p.m.: Georgia troopers deployed a tear gas to disperse the crowds near the Capitol.

9:33 p.m.: Some protesters began heading back to the Capitol. The crowd has dwindled to about 125.

9:12 p.m.: Protesters began leaving the Capitol and were marching down Mitchell Street.

9:00 p.m.: Among those outside the Capitol was Taron Harris, 22, of Atlanta. “We’re not satisfied with the results, a settlement is not enough, the charges were not enough,” Harris said. “And we’re here to say enough is enough, and we want justice. And that’s all we wanted. We don’t care about money, we don’t care about anything else.”

8:55 p.m.: The marchers and members of the National Guard clashed outside the Capital. Some marchers yelled “Pigs!” “Murderers!”

8:50 p.m.: Marchers arrived at the state Capital, where some banged on the gates. “The people united will never be divided,” some chanted.