By Christian Boone – The Atlanta Journal-Constitution

Lakea Gaither had known only one job in her adult life. She joined the Atlanta Police Department as a 22-year-old recruit, and in the 18 years since, she was repeatedly recognized for her standout work as part of the gangs unit. Officer of the Year in 2013. Investigator of the Year in 2015.

Back in May, just before Atlanta’s summer of unrest began, Gaither took a break that lasted through much of the summer, a time when violent crime in Atlanta skyrocketed.

Yet during her absence, “not one white shirt called,” said Gaither, using the nickname reserved for police higher-ups. “It was very disheartening. That’s when I decided it was time to leave.”

Gaither was one of 37 APD officers who either retired or resigned in August. Twenty-six departed in July.

Nearly twice as many officers have left the city of Atlanta force this year compared to 2019, internal documents reveal. Many, like Gaither, said they felt underappreciated both by their bosses and city leadership.

At the same time, the city’s murder rate is up 40% this year from the same point in 2019. Shootings have risen 29%; aggravated assaults, 8%, APD records show.

Police departments in Chicago, Minneapolis and Seattle are also reporting significant personnel losses. And, as in Atlanta, violent crime in those cities has increased. 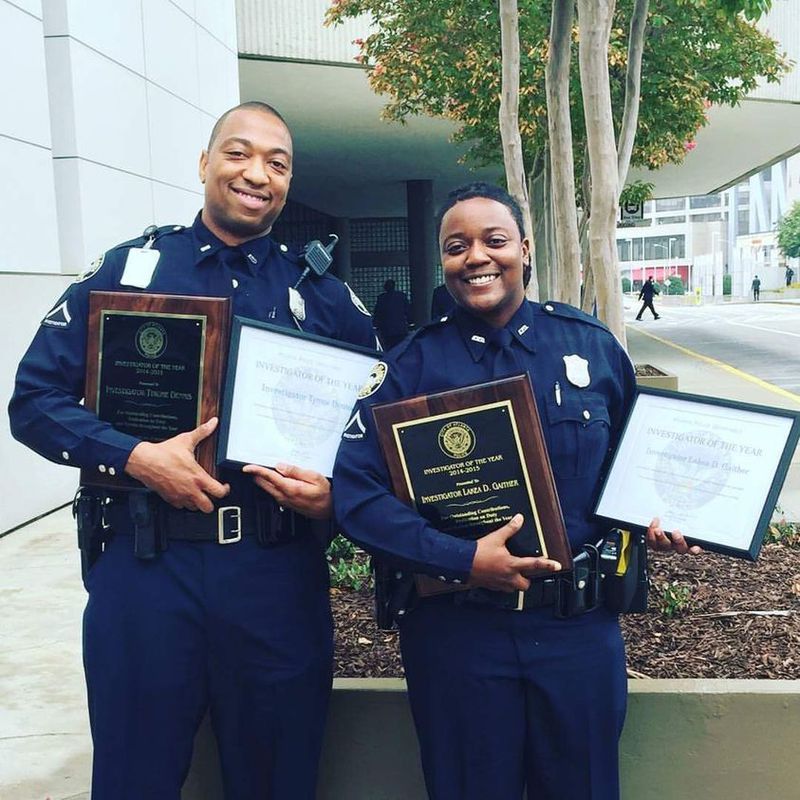 “These are some of the more experienced officers we had that are leaving,” said Gaither, now an investigator with the DeKalb County district attorney’s office. Her former partner on the gangs unit, Ty Dennis, also retired in August, accepting a job as a district safety officer for a suburban school district in his native St. Louis. That’s another 16 years of experience out the door.

“Everyone’s exploring their options,” Dennis told The Atlanta Journal-Constitution. “They make us feel like we’re all replaceable. OK, we’ll see.”

According to APD, there are currently 1,623 officers on the streets (with 110 recruits in training), a total nearly as low as any seen in the past two decades. For longer than that, city leaders have aspired to reach 2,000 officers on the force, operating under the theory that more cops on patrol equals less crime.

Former Atlanta mayor Bill Campbell first made the vow in 1997 but fell well short. His successor Shirley Franklin bolstered the force’s numbers in her two terms in office but never reached 2,000. In 2013, under Mayor Kasim Reed, the city’s police force topped that magic number, albeit briefly. Since then, APD has consistently been understaffed, running 200 to 300 officers below its current authorized capacity of 2,046 officers.

But the shortage of cops alone is not responsible for Atlanta’s rise in violent crime, says one expert.

“The general climate in the Atlanta Police Department right now is one of uncertainty about the rules of engagement,” said Dean Dabney, chair of Georgia State University’s Department of Criminal Justice and Criminology. “First you had the two college kids that got tased. The officers were fired and charged with aggravated assault, at which time the DA’s office stipulated that a Taser is a deadly weapon. Then you flash forward to the (Rayshard) Brooks shooting, and you have an instance where the DA’s office says a Taser is not a deadly weapon.”

Jason Segura, head of Atlanta’s police union, said officers had been instructed to strictly enforce a curfew imposed in response to isolated looting during protests of police killings of Black civilians. But the treatment of the students, who were stunned with Tasers and handcuffed, drew widespread condemnation.

Then on June 12, Brooks was fatally shot by Atlanta police officer Garrett Rolfe after fleeing arrest and grabbing another officer’s Taser. Rolfe, since fired, was charged with felony murder and 10 other counts. The other officer on the scene, Devin Brosnan, was charged with aggravated assault and three violations of oath of office. Both incidents were caught on video, bringing national scrutiny to the APD.

A vast majority of their colleagues, many of whom participated in a walkout after Fulton County District Attorney Paul Howard brought charges against Rolfe and Brosnan, said in each instance the officers were merely following their training. Now, they worry: If it can happen to those officers it can happen to us, Segura said.

“People aren’t going to risk their jobs, or risk indictment, just because the mayor or DA has suddenly decided what they did was a crime,” he said. Howard was recently defeated in a landslide by Fani Willis, his former chief deputy prosecutor, who was endorsed by the police union.

Even with the pandemic keeping more people at home, stops are down by one-third compared to this time last year, police documents show. For the one-week period ending Sept. 19, stops had fallen by nearly half, from 3,146 in 2019 to just 1,675 this year, according to APD stats. Proactive policing, Segura said, is just too risky.

Mayor Keisha Lance Bottoms has become a focal point of the officers’ complaints. Just two years ago, she was celebrated by Atlanta’s cops for authorizing an across-the-board pay hike of up to 30%. But now, said Gaither, the rank and file feel the city no longer has their back.

“She lost the confidence of the officers,” Gaither said.

Some citizens say they, too, have lost confidence in the mayor, though many others applauded her decisive action to fire some of the officers involved in the high-profile incidents from earlier in the summer. Buckhead resident and small-business owner Lisa Glazman said she understands why Atlanta police are not more aggressively confronting suspects.

“They have a lot to lose. I totally see where they’re coming from,” said Glazman. The rise in crime in her neighborhood has driven her and many of her friends and neighbors to consider whether they want to stay in Atlanta.

Glazman said safety concerns have led her to change routines. “I will not go anywhere after dark,” she said. “It feels like the police are outnumbered.”

Atlanta City Council President Felicia Moore said Bottoms needs to prioritize better relations with police. But officers, said Moore, also need to realize that even their most benign interactions with citizens are under increased scrutiny.

“Certain activities are just not going to be tolerated by the public,” she said.

Bottoms, speaking at a news conference on Wednesday, painted a more optimistic picture of her relationship with police. Morale, she said, is improving.

“We have seen a higher than normal rate of people retiring, but if history is any guide for us, of the people who leave APD, a number of those people will attempt to come back at some point,” Bottoms told reporters. “This is a tough time for public safety across the country. We’ve faced tough times before, we’ve faced challenges before, and we’ve been able to get to the other side of it.”

Interim APD Chief Rodney Bryant, who took over in June when former chief Erika Shields abruptly resigned, agreed things are getting back to normal.

“As we’ve moved from the level of where we were just two months ago, the number has stabilized,” Bryant said Wednesday. “We’re on the mend to getting better, but there’s still a ways to go.”

Crime, said the chief, has also plateaued after a bloody summer. In a statement to the AJC, Bryant said there were just five homicides from Aug. 9 through Sept. 5.

Bryant noted COVID-19 closed courts and allowed for the release of some offenders from jails. The pandemic, coupled with the protests, forced resources to be redirected, he said.

The spike in violent crime was greatest in the period following the protests, which began in late May. According to department figures, 46 of this year’s 98 homicides occurred between May 31 and Aug. 8, up from just 17 during the same period last year.

“However, since that time, we are starting to see proactive measures increase, as well as shooting incidents and homicides decline,” Bryant said.

But more protests loom. Wednesday night, seven people were arrested at the state Capitol following a demonstration condemning the lack of murder charges for the officers who shot Louisville, Kentucky, resident Breonna Taylor in March during a botched drug raid.

For some, a sense of lawlessness pervades in Atlanta, noting the proliferation of street racers in many intown neighborhoods.

“It’s been quite disruptive,” said Tom Kuckelman, president of his homeowners’ association at The Gallery, a Buckhead high-rise. “And then they enter and exit these residential streets way too fast. Somebody’s going to get hurt.”

Since late February, Atlanta police have made 459 arrests related to street racing, Deputy Chief Mike O’Connor said during a recent news conference. But the problem persists.

“How are we going to stop it when we can’t chase cars anymore?” said Segura, referencing a policy change enacted after the death of two civilians whose vehicle crashed while being chased by the police.

Nearly half of this year’s homicides have occurred in APD Zones 3 and 4, which include southeast and southwest Atlanta, police records show.

Columbus Ward, a neighborhood activist and lifelong Peoplestown resident, said the “tremendous increase” in the number of shootings on the city’s southside has many on edge.

Meanwhile, Ward said he is seeing fewer patrol cars in his neighborhood, leading to delays in officers’ response times.

“By the time they get to the scene, it’s sometimes too late,” he said.

Such police pullbacks can have long-term ramifications. A recent ProPublica report found crime has soared in Baltimore since the 2015 death of Freddie Gray, which sparked demonstrations that sometimes led to vandalism and arson.

Six officers involved in Gray’s detainment faced charges ranging from second-degree murder to manslaughter and illegal arrest. None were convicted.

Baltimore homicides surged to record highs following Gray’s death, and cases were closed at a much lower rate as police became less proactive in the years following the incident, ProPublica found.

“They need to overhaul the leadership,” she said. While Gaither said she personally likes Chief Bryant, she believes an outsider is needed. The city has promoted its last three police chiefs from within.

“The department is so young now,” Gaither said. “When you lose all that institutional knowledge it’s hard to replace.”

Those committing the crimes are well aware of the upheaval within the department, she said.