Trump’s nomination of Barrett, a favorite of many conservative advocacy groups, capped a momentous week in Georgia politics marked by polls showing a deadlocked race and a Friday visit by Trump that underscored the lengths Republicans have gone to play defense in the state.

Barrett’s supporters see her nomination as a landmark victory for conservatives, as her confirmation would cement the ideological lean of the court 6-3 in their favor. As an appellate court judge, she’s honed a record vociferously praised by anti-abortion activists and gun rights supporters. 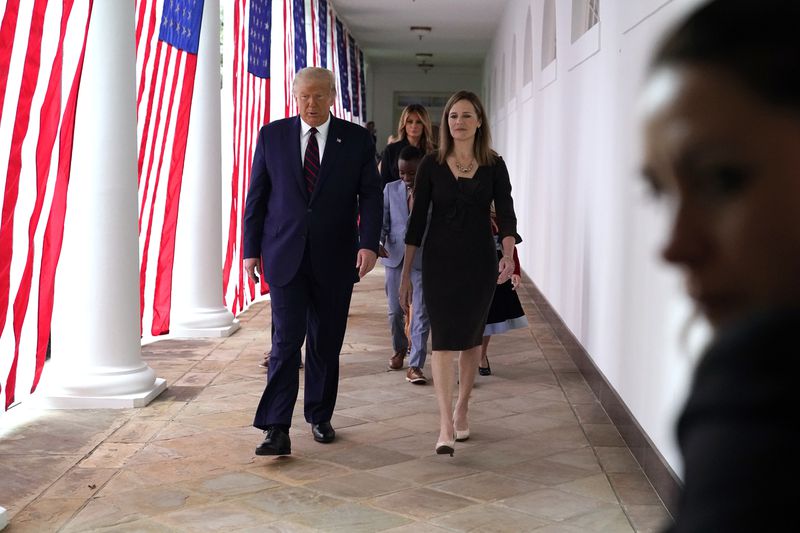 Though Republicans appear to have the votes to push through the nomination this year, Democrats are hoping to energize their supporters with warnings that her nomination jeopardizes access to health care during the grinding coronavirus pandemic and would lead to new abortion restrictions.

Jon Ossoff, the Democratic nominee to challenge Perdue, drew a direct line to the court’s upcoming hearing on a challenge to the Affordable Care Act and a “long-term partisan effort” to overturn the Roe v. Wade decision that established a woman’s right to an abortion in America. 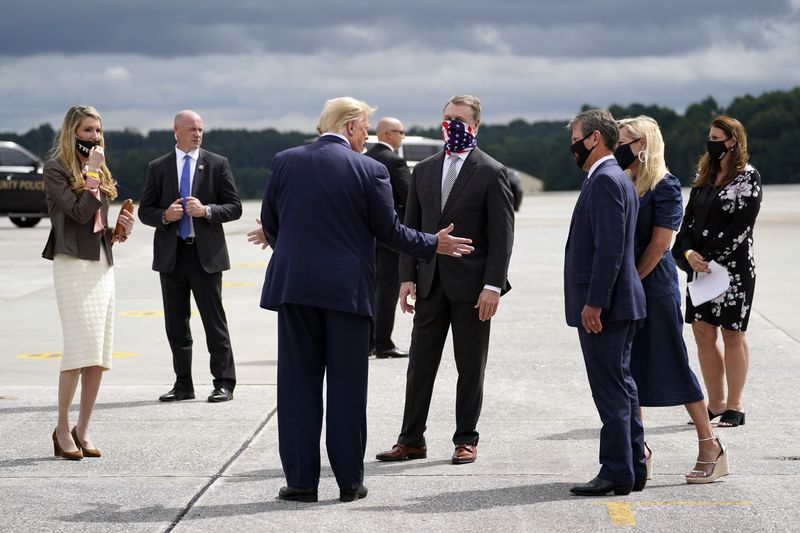 “That’s what’s at stake in the Supreme Court confirmation process,” he said in an interview. “Are we going to confirm judges who will uphold the rule of law impartially and in the public interest? Or judges who will pursue a partisan agenda that undermines access to health care for ordinary people?”

Raphael Warnock, the leading Democrat in the race to challenge Loeffler, defined the debate in the same terms, arguing that the winner of the Nov. 3 election should be granted the appointment and the “Senate should have a thoughtful process worthy of the importance of this seat.”

Even before Barrett was nominated for the seat vacated by the late Justice Ruth Bader Ginsburg, who died Sept. 18, Republicans promised an accelerated confirmation vote.

Loeffler, the first U.S. senator to call for a vote to fill the seat before Election Day, said in an interview that lawmakers must demonstrate they will “keep the process moving along and that it wouldn’t be tied up in politics.”

“It’s about upholding our constitutional duty and making sure that the American people have a full Supreme Court,” said Loeffler, who also aired a TV ad this week seeking to appeal to conservative voters over the vacancy.

The demands for an immediate vote also put Georgia Republicans who took contradictory positions four years ago in a vulnerable position. Both Perdue and Collins fiercely opposed then-President Barack Obama’s attempt to tap Merrick Garland to a vacant seat in March 2016, eight months before that year’s general election.

Perdue also voted with all Senate Republicans to change the chamber’s rules and invoke the “nuclear option” to lower the threshold for confirming Supreme Court nominees from 60 votes to a simple majority of 51, which effectively sidelined Democrats from the confirmation process.

In an interview, Perdue said his decision to back an election-year vote on Barrett was “no flip-flop” because in 2016 the White House was held by Democrats and the Senate was controlled by Republicans. This year, Republicans have a 53-47 edge in the chamber and Trump as president.

“I’m doing it because I think it’s the right thing to do,” he said. “I think the people of Georgia want this done. They want somebody to uphold the Constitution, not have an activist in there.”

The fight over the seat also added a new dividing line in the messy special election, where Collins and Loeffler have been trying to out-duel each other for conservative votes.

Collins, who drew criticism for his bracing reaction to Ginsburg’s death last week, echoed those remarks with a full-throated endorsement of Barrett’s appointment.

“More than 60 million babies have been murdered since Roe v. Wade was wrongfully, and unconstitutionally decided in 1973,” he said. “But today, for the first time in 47 years, we have the opportunity to disavow the plague cast on our country” by confirming an anti-abortion justice.

Loeffler, a former financial executive appointed to the seat last year, established that she’ll seek to use the confirmation hearings to raise her profile. She sought to frame herself as Barrett’s chief champion in the U.S. Senate, where four consecutive days of confirmation hearings are expected to begin Oct. 12.

“As someone who has stood up to the radical left’s cancel culture and won, my advice for a fellow strong conservative woman is this: Keep going, keep pushing, keep fighting and keep winning.”