By Tamar Hallerman – The Atlanta Journal-Constitution

Both presidential campaigns are zeroing in on suburban women. What do Georgia’s think?

Carol Geraci describes herself as politically “middle-of-the-road,” the kind of person who can get along with anybody.

For more than four decades, the Smyrna grandmother voted for Republicans, but in recent years she believes the party has drifted too far to the right. In November, she plans to cast her ballot for Democrat Joe Biden, less because of his platform and more to register her opposition to President Donald Trump.

“I go on character,” Geraci said, “and Trump doesn’t have character.”

Sabrina Mao of Marietta is firmly in the opposite direction. To her, the protests that erupted during the social justice movement prove that Democrats have no “moral grounding.”

“The riots, the protests — they really got me,” Mao said. “I can’t imagine someone breaking into my house and taking my stuff. That’s just not decent. I love that Trump will restore order. Think of a family whose children won’t listen to their parents. You don’t have to agree with everything your parents say, but you don’t beat them up either.”

In a wild 2020 election shaped by pandemic, protests and polarizing politics, suburban women could well determine the fate of Georgia’s presidential race, two U.S. Senate elections and down-ballot contests. And both parties have sharpened their pitches to win over the once-reliably Republican bloc.

With Atlanta’s suburbs no longer as monolithically white as they once were, the parties are gearing their message toward an increasingly diverse audience. Biden’s campaign has used the U.S. Supreme Court vacancy created by the death of Ruth Bader Ginsburg to hammer kitchen-table issues such as health care that helped Democrats gain ground in 2018.

Trump’s campaign has emphasized his economic platform — one of the areas where Georgia voters give him the edge over Biden — along with warnings of suburban crime and declining property values if he’s defeated in November.

“Biden will destroy your neighborhood and your American Dream,” Trump stated in a July tweet addressed to “the Suburban Housewives of America.”

There’s a reason behind his messaging. Exit polls show the GOP has lost the suburbs only three times since Jimmy Carter’s defeat in 1980: in 1992, 1996 and 2008. Democrats won the White House in all three of those elections.

Atlanta’s suburban women were once an overwhelmingly conservative bunch. They helped send Newt Gingrich, Johnny Isakson and Tom Price to Congress and elect Ronald Reagan and both Bushes to the presidency.

But changing demographics and a distaste for Trump have put many of those same college-educated women in Atlanta’s bedroom communities up for grabs.

“When people talk about politics or ‘the suburbs’ they usually mean an antiquated version of what the suburbs is — a holdover from an earlier time,” said Michelle Au, a Democratic physician running for a suburban state Senate seat. “But they’re completely different than how they’re portrayed. They’re diverse, they’re changing — and you can feel it changing politically.”

Some are newer residents with left-leaning stances, eager to make Republicans pay for conservative policies. Others are aligned with the GOP on issues such as taxes and abortion, but they helped Hillary Clinton flip the Republican strongholds of Cobb and Gwinnett counties in 2016 because they couldn’t stomach Trump.

Democrats have high hopes they can expand that margin in the ‘burbs this year. 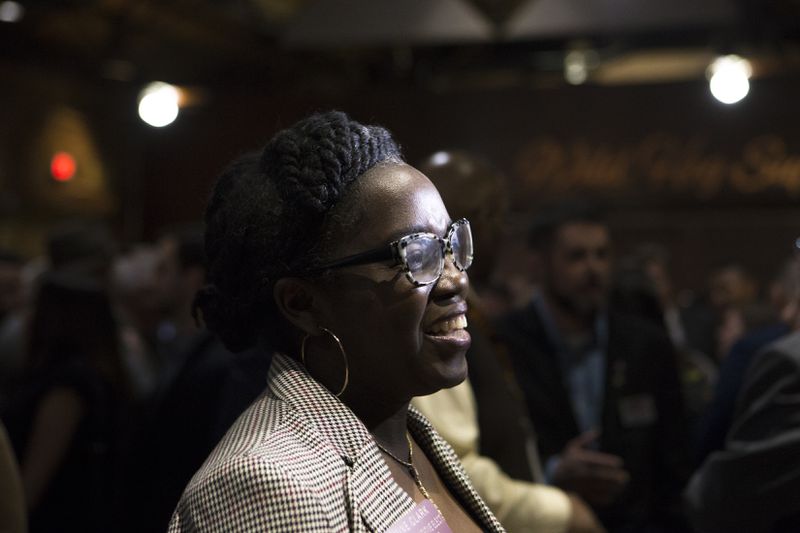 State Rep. Jasmine Clark, a Democrat who flipped a Gwinnett-based district in 2018, said Republicans often underestimate how diverse suburbia has become. She said she won’t soon forget a forum two years ago when her GOP opponent expressed shock at encountering so many immigrant families in the Lilburn area.

“You’ve got a president saying he’s trying to protect ‘suburban housewives’ from undesirables, but I don’t think they realize that it’s sending a message to people like me and my Hispanic neighbor and my Asian neighbor,” said Clark, who is Black. “It wasn’t a winning strategy in the suburbs in 2018, and it won’t be in 2020.”

An Atlanta Journal-Constitution survey released this week didn’t carve out suburbs, but it showed Trump’s support among white voters down a bit. Biden captured roughly 30% of the white vote — far higher than exit polls showed Clinton fared among those Georgia voters in 2016.

It also showed a sharp gap between white men and women. While about 25% of white male Georgia voters back Biden’s campaign, that number jumped to 34% among white women.

And a New York Times-Siena College Research Institute poll of Georgia voters found those in the “inner” suburbs ringing the city overwhelmingly support Biden, while voters in the more exurban “outer” suburbs resoundingly back Trump.

Democrats across suburbia are driving a message about expanding health care access — and pushing back on claims of chaos at the gates.

“We have to make sure they know the fear mongering isn’t going to work here. There’s not riots and looting and anarchists at the doorstep,” said Pallavi Purkayastha, a Democratic strategist in Johns Creek.

She said she’s advised Statehouse candidates to condemn the violence from the protests and distance themselves from the “defund police” movement while also pivoting back to a core message.

“What’s very real is that voters are much more likely to suffer from financial consequences of health care problems than from someone looting their store,” Purkayastha said.

“Republicans are absolutely strip-mining rural areas for votes that they used to be able to take for granted in metro Atlanta,” said Todd Rehm, a veteran GOP strategist. “It takes a lot more work to produce 10 votes in South Georgia than 10 votes in the suburbs. But we just can’t find that traction in metro Atlanta anymore.”

Republicans have history on their side.

Four years ago, Trump carried the suburbs by 4 percentage points, according to exit polls. And in Georgia, some 70% of white women in Georgia backed him.

Some of Trump’s supporters believe recent polls showing a tight race in the suburbs are overblown.

“We really believe that communism is at the door and we don’t want to answer it,” she said. “But I worry about it happening again, here, today. And I could see very clearly how it could happen.”

The Trump campaign is leaving little to chance.

Last month’s Republican National Convention was stacked with speeches from family members and women in Trump’s inner circle who spoke to the president’s less confrontational side, including the first lady, daughter Ivanka and press secretary Kayleigh McEnany.

On the policy front, Trump has honed a “law and order” message that frames himself as the only person who can keep America safe from the “angry mobs” marching for racial justice in cities such as Kenosha, Wisconsin, and Portland, Oregon. He’s also repeatedly — and falsely — stated that Biden wants to defund the police.

The message seems to be resonating more with some than others. Barbara McAdams, a Lawrenceville retiree, has her frustrations with Trump. But she appreciates how he is “really trying to bring the safety issue across to people in the suburbs.”

“When he tweets sometimes and some of the things he says drives me absolutely nuts,” McAdams said. “But the man has kept every promise he made and more that he made while running for office. That means a heck of a lot to me.”

For others, it’s too little, too late. Michelle Cardillo, a stay-at-home mom from Alpharetta, tried to give Trump a chance. She liked that he was willing to take steps against illegal immigration but believes his tactics were too heavy-handed.

“He has demonstrated a lack of awareness of the responsibility and restrictions of being president and what the job really means,” said Cardillo, who reluctantly plans to vote for Biden. “I tried not to be partisan but kept being disappointed.”