‘We’ve got to find somewhere to stay’

More than 100 tenants in a southeast Atlanta apartment community were abruptly told last month they need to find a new place to live as developers plan to demolish the complex and build high-end apartments and condos.

The loss of the decades-old Gladstone Apartments — just half a mile from the Atlanta Beltline in the Chosewood Park neighborhood — has worried some neighbors and officials who are concerned about dwindling affordable housing in the area and the looming displacement of dozens of lower-income residents.

“We’ve got to find somewhere to stay,” Adrean Anderson, 38, said while sitting on the steps outside her apartment at Gladstone. Anderson, who has lived at the complex for three years with her boyfriend, said she received a letter in late August informing her that her lease was not being renewed and that she had to move out by the end of October. “We don’t have a place to go. … It’s just a struggle.”

The Chosewood Park neighborhood is close enough to take part in the burst of new construction that has followed Atlanta’s Beltline through communities across the city. Many consider the Beltline a model for reimagining old neighborhoods and spurringeconomic development. But familiar worries emerge: The new housing and amenities, neighbors say, may be out of reach for the city’s low- to mid-income earners and legacy residents, many of whom are Black. 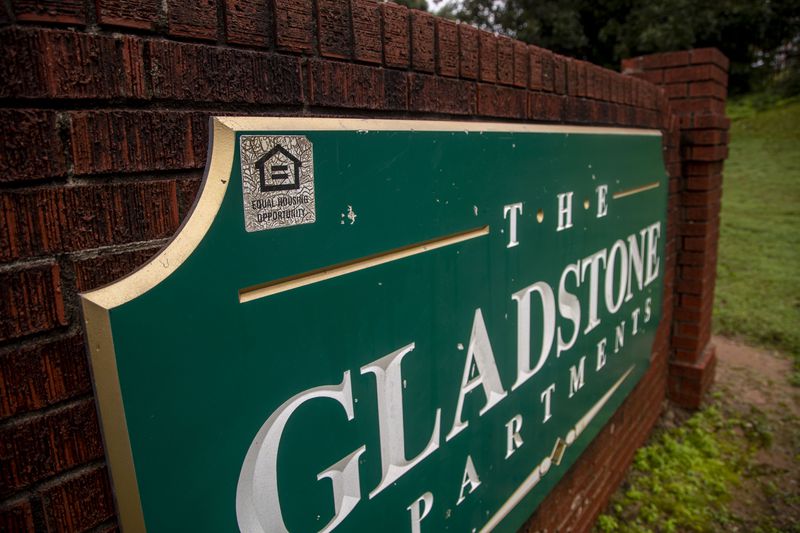 While the city requires developers to make a percentage of new apartments along the Beltline affordable, the technical definitionof what’s affordable doesn’t always align with existing tenants’ incomes.

“A lot of us are finding apartments, and a lot of us are not,” said Sharon Hood, 60, who lives near Anderson at the complex. “I’m trying to find an apartment.”

Developers could eventually build over 1,000 apartments and condos on the 34-acre plot of land located along Boulevard; they have not announced any plans to exceed the minimum number of affordable units required by city law.

The complex is offering financial incentives and relocation assistance for tenants who move out by the end of September or October. A spokesman representing the apartment complex management said the owners are working with the residents sothey can find new housing.

But as dozens of residents and families continue to look for new places to live amid a pandemic, some wish they had more time to relocate.

Searching for a new home

The Gladstone Apartments include more than a dozen one- or two-story brick buildings spread out over several streets just off Boulevard. They were built in the late 1940s, according to Fulton County property tax records.

Life at the complex isn’t always great, Anderson said, echoing concerns about crime and maintenance. Just earlier this week, a domestic disturbance call at the complex ended with an Atlanta police officer shooting and killing a man who approached her with a gun, authorities said.

“It’s quiet as long as you stay to yourself,” Anderson said.

Gladstone tenants were told in late August that all of the apartments “must be vacated and the buildings will be demolished,” according to a copy of a notice obtained by The Atlanta Journal-Constitution. 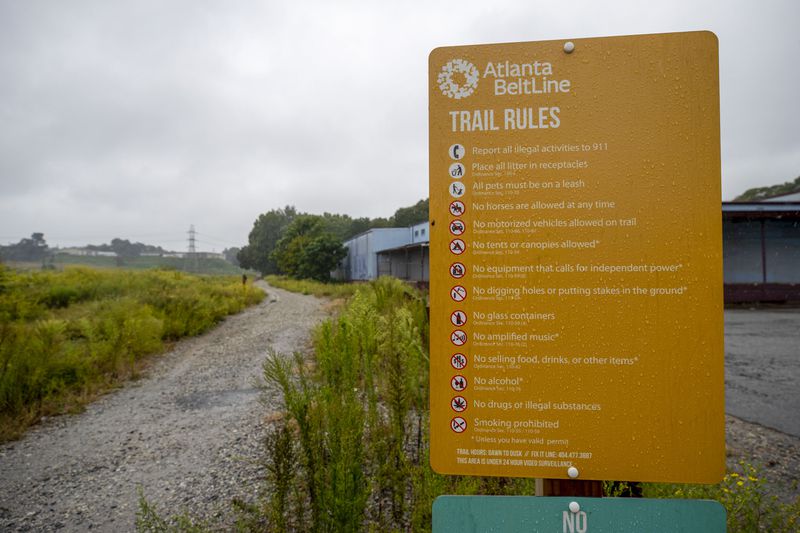 Gladstone sent the notices to tenants in 125 units, according to Jeff Dickerson, a spokesman for the apartment’s management. The owners do not plan to file evictions against anyone who does not leave by the end of October, and staff are assisting residents in finding new apartments, he said.

“(We’ve) just done everything that we can so that no one in that building is displaced,” Dickerson said. “That’s the objective.”

Despite the efforts, tenants are feeling the pressure of having to find a new place to live in the middle of a pandemic.

“It’s hard especially when you’re not getting paid that much,” said Anderson, who lost her construction job when the pandemic hit, though her boyfriend is still employed. “You’re not really going to find any (rent) as low as these apartments.”

New designs for an old neighborhood

For most of the 1900s, the Chosewood Park neighborhood was home to workers at the nearby federal prison and an auto assembly plant operated by General Motors. More recently, the recession left about a quarter of homes in Chosewood Park vacant. In 2009, a public housing project next to the Gladstone Apartments was demolished.

Now, its streets are lined with modest, single-family houses, while areas around the Beltline, which is not yet paved there, have seen a burst in new development in recent years. Along Boulevard, near where it intersects with the Beltline, new luxury apartments sit next to vacant structures and empty, overgrown lots. The Atlanta Housing Authority has plans to redevelop the old public housing land into a mixed-used complex.

On the Gladstone property, developers at Empire Communities hope to eventually build about 400 townhomes and condos priced from around $200,000 to $450,000. 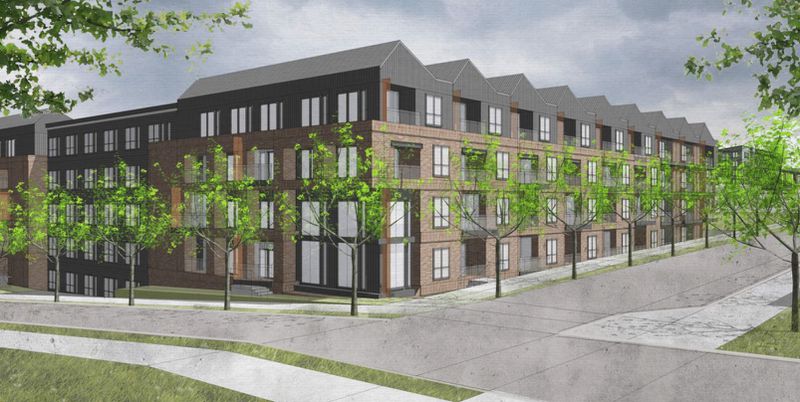 About 480 units will be for rent, according to plans recently submitted to the Beltline Design Review Committee, which provides recommendations for large, Beltline-adjacent projects. About 300 more units could be built along Englewood Avenue, on the north side of the property, with a retail component.

Developers said it is too early to say how much the rents at the apartments could be, but they plan to at least meet the city’s minimum requirement by offering 15% of the units as “affordable” for someone who makes 80% of the area median income, according to plans. Under the city’s guidelines, an “affordable” one-bedroom apartment for a low-income tenant would cost no more than $1,240 per month.

That’s far more than the $485 in monthly rent that Kenyon Cooper pays to live at Gladstone right now.

“They’re trying to get rid of us so they can make something like those apartments they just put right there,” Cooper, 25, said, referencing a new complex down the street.

Hood, his neighbor, worries the new development will only attract affluent people, though she agrees the current apartment buildings need to be torn down. “Us poor Black folks, we can’t make it,” she said. 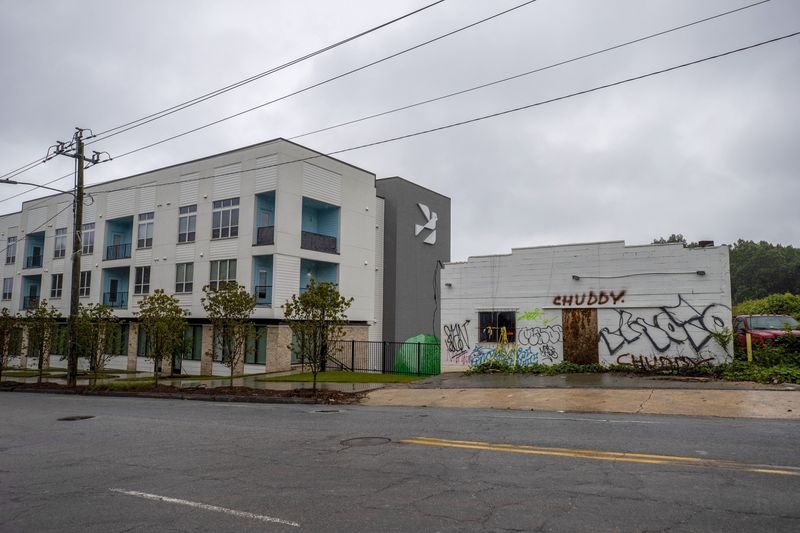 Councilwoman Carla Smith, whose district includes the apartment complex, said her office has heard from several residents at Gladstone who are looking for new housing, including some who showed up at Smith’s home a few blocks from the complex asking for help.

While permits and applications have not yet been filed with the city, Smith said she wants to work with Empire in the hopes that they include more workforce housing at affordable rates, similar to rents offered now at Gladstone.

“I would like to have good development where we can bring some of these legacy residents back,” Smith said.

Many of the new mixed-use properties around the Beltline in southeast Atlanta have been built on formerly industrial land, said Nathan Clubb, the president of a civic association that represents several neighborhoods around Chosewood and along Boulevard.

To neighbors like Clubb, the situation at Gladstone serves as an alarming example of gentrification in one of Atlanta’s historic neighborhoods. New development has cropped up along the Beltline in other Atlanta neighborhoods including the West End and Old Fourth Ward, leading to the same concerns over affordability and displacement.

“You just don’t have many complexes like (Gladstone) still in the city, particularly in our neighborhood,” said Clubb, who knows a few tenants there who are looking for new apartments they can afford. “It seems that at a time when our neighborhood is finally starting to get more job opportunities, and hopefully better transit, the folks that are most dependent on those kinds of jobs and those types of transit are getting pushed out.”