The first debate is planned on the campus shared by Case Western Reserve University and the Cleveland Clinic in Ohio. The nonpartisan Commission on Presidential Debates said Fox News anchor Chris Wallace will moderate, and the debate will be from 9 to 10:30 p.m. Eastern time. The debate will be broadcast live on NBC, ABC, CBS and Fox, as well as C-SPAN, CNN and Fox News.

Here are some of the more memorable moments in presidential debate history:

The 1960 presidential election was the country’s first televised debate.

Democrat John F. Kennedy, the young Massachusetts senator, looked tan and relaxed. Republican Richard Nixon, who had been sick and in the hospital, looked hollow-eyed and had a 5 o’clock shadow. Kennedy paired his tan with a blue suit, offering a nice contrast on black-and-white TVs.

Nixon wore a gray suit, which blended into the gray studio background. Many considered the debate a turning point in Kennedy’s campaign.

In 1976, Republican President Gerald Ford’s insistence “there is no Soviet domination of Eastern Europe” during a 1976 debate against Democrat Jimmy Carter was such a blunder that the questioner asked whether he really meant to say that.

“I’m sorry, could I just follow — did I understand you to say, sir, that the Russians are not using Eastern Europe as their own sphere of influence in occupying most of the countries there and making sure with their troops that it’s a Communist zone?” 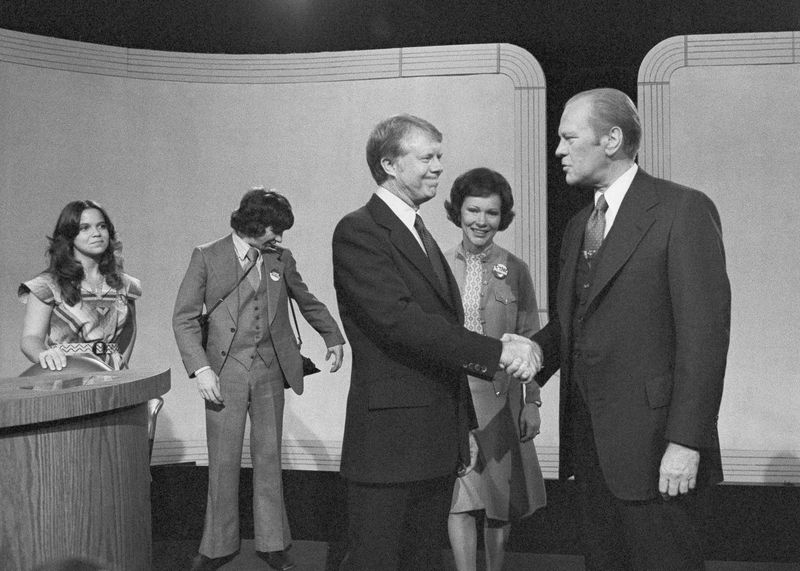 Ford said he did. Years later, Ford acknowledged, “There’s no question I did not adequately explain what I was thinking.”

In 1980, President Carter was struggling to save his beleaguered presidency from the Iranian hostage crisis, inflation, rising gasoline prices and an overall national mood of despondency. His opponent, GOP White House nominee Ronald Reagan, and Carter debated one time, a few days before the election. During the debate, the candidates talked about Medicare, and Reagan uttered his now-famous line, “There you go again.”

Four years later, President Reagan, then seeking to become the oldest president to win reelection, used humor to address questions about his advanced age at a 1984 debate against Democrat Walter Mondale.

When a questioner asked Reagan if he had any doubts whether he had the strength for the job at his age, the then-73-year-old was quick to respond: “Not at all. I will not make age an issue of this campaign. I am not going to exploit, for political purposes, my opponent’s youth and inexperience.” Even Mondale, 56, had to laugh at that.

ExploreDonald Trump vs. Joe Biden: 5 issues to watch in their first debate

During a 2012 presidential debate between Republican Mitt Romney and Democratic incumbent Barack Obama, Romney was asked about pay equity in the workplace for women. He talked about how he had pulled together a list of candidates for administration positions when he was Massachusetts’ governor.

The comment drew ridicule almost immediately and was held up as an example of Romney’s dissonance on women’s issues.

The Associated Press contributed to this report.