The University of Georgia has faced criticism in recent days from Black and Hispanic student leaders and organizations that it has not adequately responded to discrimination complaints.

The complaints stem from incidents involving crude images, sexist language and racial slurs, the students say. They want leadership at the state’s flagship university to enact measures that result in a better learning environment for students of color.

Similar situations are occurring at several colleges and universities as experts say more students are willing to report their accusations, sparked by the ongoing demonstrations on racial injustice in many parts of the country.

At UGA, the Lambda Chi Alpha fraternity suspended operationsabout a week ago after racially charged and sexist messages reportedly posted by members online were exposed by the Black female student who was the subject of the messages. A few days later, former UGA football player Otis Reese posted a lengthy message on Twitter accusing the school of maintaining a racially insensitive and unsupportive environment. On Friday, UGA’s student affairs office sent a letter to the university’s Hispanic Student Association apologizing for a Sept. 3 incident when the group said its meeting was interrupted by some white men who yelled expletives, showed offensive images and mocked the Spanish language.

On Friday, about 200 protesters marched on and around the campus demanding continuous diversity training for campus police, renaming buildings whose names have racist origins and other actions. The University System of Georgia in June created a task force to review building names at all of its public colleges and universities.

“I want people to know that they can call me names, attack me, tell me I’m wrong, but I’m not giving up until Black and BIPOC (Black, indigenous and people of color) students get the same experience as our white peers on this campus,” Arianna Mbunwe, a third-year student and activist who was the subject of the fraternity messages, said in an interview. The fraternity messages derided Mbunwe for her criticism of UGA and state leaders’ handling of the pandemic. 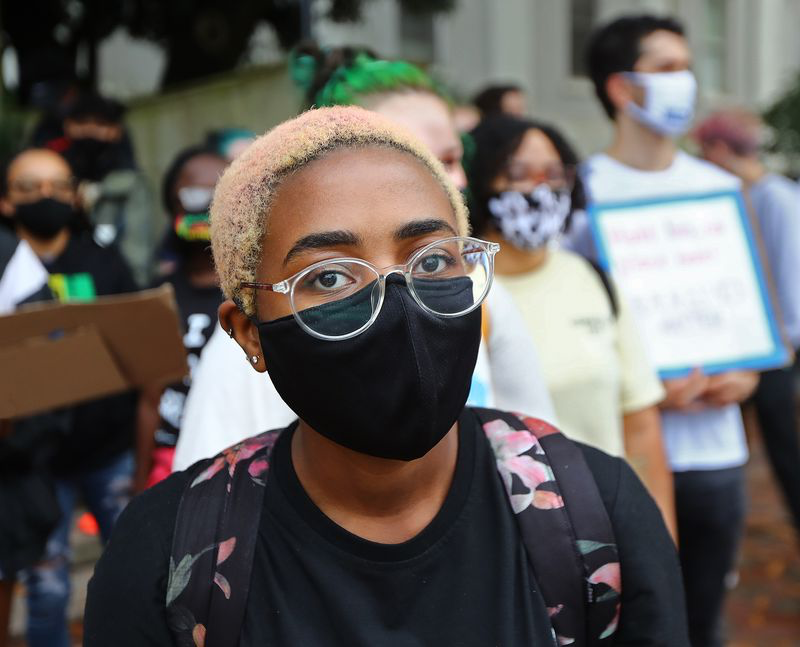 University administrators have tried, with mixed success in recent years, to be more inclusive. In February, the university named its education school after its first Black graduate, Mary Frances Early. Last month, a university task force on race, ethnicity and community began work “to foster a more welcoming and supportive learning environment for Black and other underrepresented members of our campus community.” UGA President Jere Morehead has pledged $1 million from the university’s athletic association to implement some of the task force’s ideas. Recommendations are due by December.

In response to requests for comment, UGA officials directed The Atlanta Journal-Constitution to an interview with Morehead posted Friday on its website. Morehead said he was “disgusted” by the fraternity’s comments, where one person used the phrase “Aunt Jemima” to make disparaging remarks about Mbunwe. (The person used the screen name “Ghost of Aunt Jemima” to talk about her.)

“That’s not who we are as a university, and we must reinforce that point every day,” Morehead said. “Incidents of this nature do, however, reveal to me that we still have much work to do in battling racism, and I am pleased to say that we are doing that work.”

University data shows some improvements in enrollment, but some longstanding challenges. The percentage of Black and Hispanic students has increased from 10.6% a decade ago to 13.9% last year. Hispanic student enrollment has doubled in the past decade from 1,027 students in 2009 to 2,186 last year.

The combined percentage of Black and Hispanic students, though, is still well below the statewide percentage of those groups, which is 43%. The number of Black, first-year students at UGA has declined from 444 five years ago to 405 last year.

Most discriminatory acts on college campuses occur on social media or in group chats. In early June, the AJC reported a surge of college students in Georgia and across the nation being outed on social media for racist posts, as well as being accused of sexual assault and other misconduct.

Count Mbunwe among the skeptics. She has complained the university’s investigation into her complaint against the fraternity has focused more on her past social media posts. A UGA spokesman said Monday the incident is still under investigation.

Reese, the former UGA football player, said he was pulled over and “harassed” by police on two different occasions.

“The Racist events that I kept experiencing weighed on me heavily and seemed never ending,” wrote Reese, who transferred to the University of Mississippi.

UGA officials responded in a statement that it “disputes any suggestion that it maintains an unsafe, unsupportive, or racially insensitive environment.”

In the case of the “Zoom-bombing” of the Hispanic Student Association meeting, UGA’s student affairs office said it has been unable to determine who crashed the video meeting because software companies such as Zoom do not share internet addresses of those using their platforms.

“The university has once again disappointed us,” the Hispanic student group said. “We are tired of broken promises and empty statements.”

UGA’s student affairs office responded in a letter that included an apology.

Raechele Pope, a University of Buffalo associate dean who specializes in campus diversity issues, said there is a “nexus” of an increase nationally in hate incidents on college campuses and more protests against such incidents. Colleges, Pope said, too often want to calm the crisis and move on and not listen to students. Pope said colleges should implement different ways to improve diversity, such as requiring students to take a course on racism and its impact.

“I know we have best practices to make this happen,” Pope said.