To get rid of kudzu and other invasive overgrowth in Autumn Park, Doraville hired a few four-legged weed eaters.

The city is partnering with Trees Atlanta and Get Your Goat Rentalsto restore the park — and give a few goats lunch. The goats were brought to the 6.3-acre park last Thursday and will stay through the first week of October.

To protect the goats from stray dogs and coyotes, they’re being contained with an electric fence. Guard dogs are also keeping them company. Residents can stop by and watch the animals work, but they’re encouraged to keep their distance from the electrified fence. 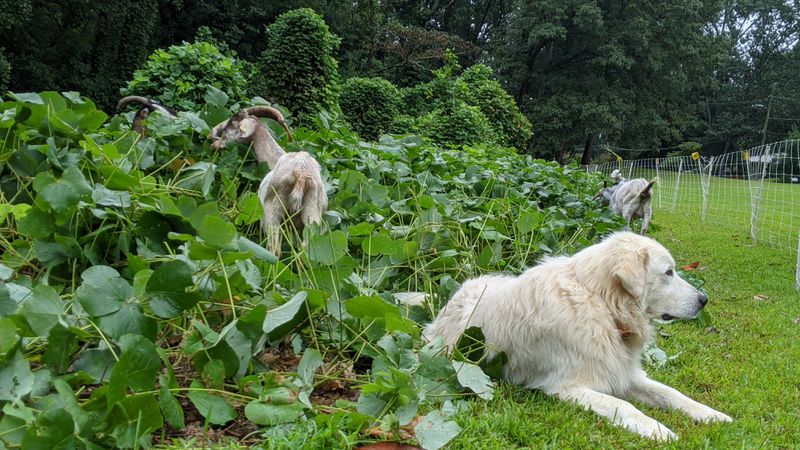 Mayor Joseph Geierman said the park’s overgrowth has been a concern of residents for decades.

“Over the past 20 years, for whatever reason, the city had allowed kudzu and English ivy and other overgrowth to take over,” he said. “As I was talking to neighbors who lived around there (in 2017), a lot of them brought up Autumn Park being in its current state as one of their concerns.”

Geierman said he had friends who used goats to eat the ivy in their backyard, which brought his attention to the trendy form of plant management. When he was elected to Doraville’s city council in 2017, he said he tried to get the goat-powered service started, but it fizzled out.

In July, Chris Eldridge became the new city manager, which Geierman said allowed the project to gain traction. Eldridge negotiated a two-year agreement with Trees Atlanta, a nonprofit focused on urban forest conservation, to take care of Autumn Park. The partnership will focus on getting rid of the invasive plants for long-term restoration.

“The harder part is managing the process of doing native replanting and making sure the kudzu doesn’t come back,” Geierman said. “You can have the goats go out and eat it, but it can come back pretty quickly after.”

In place of kudzu, Trees Atlanta will plant hardwood trees native to Georgia, the mayor said. Autumn Park is located off Allen, Autumn, McClave and Raymond drives in the southern portion of Doraville.