By C.W. Cameron, For the AJC #atlanta-ga

Erika Council wants to make sure you get your fill of biscuits.

That means buttermilk biscuits, angel biscuits, biscuits transformed into cinnamon or chocolate buns, and biscuits filled with bacon, egg and cheese, or served alongside shrimp and grits. You can pick them up at her Saturday morning pop-up, the Summerhill Breakfast Club, or get them delivered to your house in Atlanta, or anywhere across the nation.

In 2012, she started her food blog, Southern Soufflé. “I shared recipes and told stories about food from the African American point of view,” she said. “I gained a huge following that way. And I came to appreciate the value of good photos.”

Council said she’s always been good at making biscuits. “I learned to make them working at my grandmother’s restaurant, Mama Dip’s Country Kitchen (in Chapel Hill, North Carolina). She served biscuits at every meal. I learned them from my other grandma, who was baker for the church. I thought about being a chef, but I saw the reality of the restaurant business, and decided to go into computer software.” 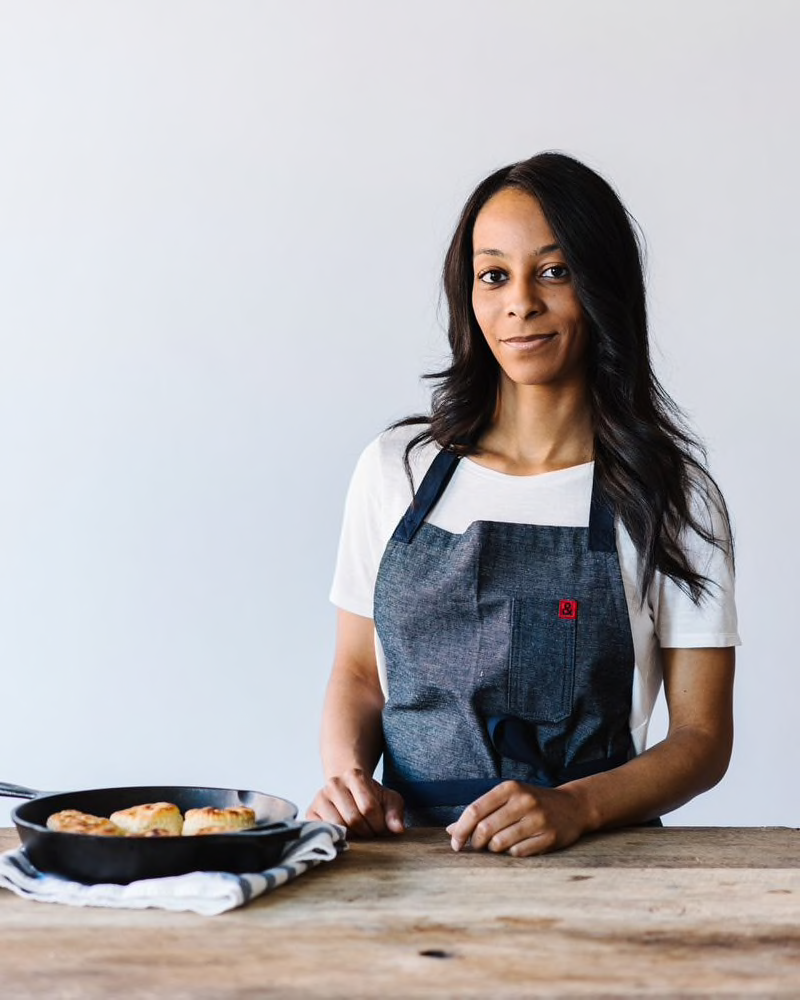 She found herself baking to relieve the stress of her corporate job in information technology. “Baking calmed me,” she said. “First, I was just cooking for friends, but they would recommend my baking to other friends. Then, I started doing pop-up dinners. That was in 2016, and now I have a biscuit delivery service.”

She’s not making cathead biscuits, the ones big enough to serve as a meal for two. Hers are 2-inch biscuits, sturdy enough to stand up to a filling of fried chicken thighs or country ham and pimento cheese, but tender inside the crisp exteriors. They’re big enough to be filling, but small enough so they’re not overwhelming.

Before COVID-19, Council was considering a brick-and-mortar location. For now, she’s moving to a bigger production kitchen, to allow her to scale up her delivery business and, maybe around the holidays, start offering pies and other desserts.

A major project is her upcoming cookbook. “I’m writing about biscuits,” she said, “sharing recipes for jams and gravies, but the book will also be full of stories of how I got here, and some of the people who helped me along the way.”

For others considering a jump into the food world, she said the most important thing is to make sure there’s a demand for what you want to make, and that you follow the right protocols. “Work with a cottage license and when you’re ready, go into a commercial kitchen,” she said. “Be sure you’re doing everything legal. And, know that not everybody will think your product is as good as you think it is. Be OK with accepting that criticism. Let it roll off you, and keep moving on.”

Along the way, she learned that packaging and branding are very important, and that customer service is critical. “The box is almost as important as what’s inside,” Council said. “And, you’ve got to make sure it’s easy to find you. Put up a website, and make sure the pictures show off what you can do.”

It helped that a number of Atlanta chefs saw the potential in what she was doing. “Bryan Furman let me take over his restaurants for my pop-ups,” she said. “So did Todd Richards. The guys from Kimball House were the first ‘fancy’ establishment that let me pop up in their restaurant. I would think, ‘I’m just serving fried chicken.’”

As for what to do with any day-old biscuits, should you find yourself in that predicament, Council said that, as long as they’re hot, they’ll be just as good. “My grandmother would say mist them, put aluminum foil on the top and put them in the oven to get hot. And, when you’re tired of eating them that way, turn them into bread pudding.”