Part 2 of 3: AJC Investigates the Future of Rural Hospitals

Desperate to protect access to healthcare in their rural community, Elbert County leaders in 2013 handed over the operational reins of their tiny hospital to a South Carolina health system.

For a monthly fee of roughly $40,000, the nonprofit system pledged a dramatic turnaround after decades of struggle at Elbert Memorial. To make the hospital profitable, it brought in a new leadership team to help draw specialty physicians and open up new lines of services.

Instead, millions in revenue were lost as patients abandoned Elbert and sought care at other hospitals, including the large one across the state line owned by the healthcare management company, AnMed Health. Many private-pay patients also went elsewhere because Elbert Memorial was not in their insurer’s network.

After five years under the nonprofit system, Elbert Memorial’s debt had mushroomed to $6 million.

“They didn’t do us any favors,” said Elbert CEO Kerry Trapnell, who was hired by AnMed just before its contract expired. 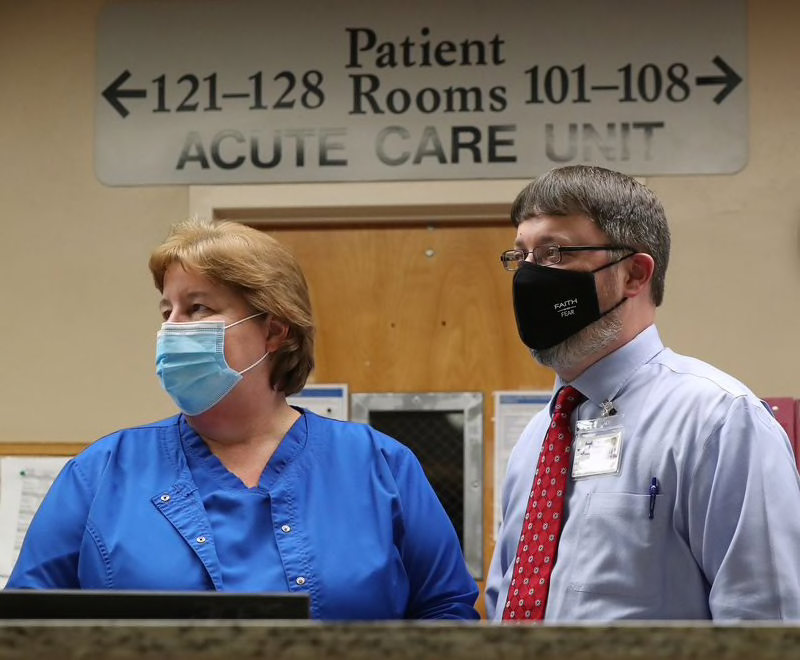 For years, Georgia’s rural hospitals have looked for a lifeline that hasn’t come. Many have handed over control to large healthcare systems. Some have counted on local governments for subsidies. Others have borrowed tens of millions of dollars through municipal bonds. Communities also pinned hopes on a state rescue plan offering dollar-for-dollar tax credits to those who donate to eligible hospitals.

In many instances, those efforts have been unable to stop the bleeding.

In 2018, after a subsequent management company left, Elbert Memorial faced operating losses of $1.5 million, and all it had left in the bank was $400,000.

Trapnell said he can barely cover payroll some months and is forced to request emergency funds from the state to try to stay open.

Heart attack patients like Mary Toney say it is critical to make sure the hospital survives. Had it not been there for her in August, “I could have probably died,” said Toney, who was stabilized at Elbert Memorial, then had triple bypass surgery in Athens a week later. After the surgery, she spent four weeks in rehabilitation at Elbert Memorial.

Officials at AnMed Health declined The Atlanta Journal-Constitution’s request for an interview. But in a prepared statement in response to questions, officials said the organization had provided millions of dollars in capital and operational support to Elbert Memorial.

Under its contract with the rural hospital, AnMed had agreed to invest $2.65 million. However, over the course of the five-year agreement, it said it had provided more than $4 million in unreimbursed services, including physician recruitment and salaries, invested capital and blood bank products.

At the end of the agreement in 2018, it forgave any outstanding debt and unpaid bills “as a gesture of goodwill,” officials wrote.

Hoping to improve efficiencies and curb costs, other rural Georgia hospitals have struck similar partnerships with larger health systems. The arrangements often allow the smaller hospitals to offer services they could not otherwise afford, lock in discounts for supplies and equipment, and address staffing shortages, said healthcare consultant Don Bivacca, of the Nashville-based Healthcare Management Partners.

“When it works well, it’s usually because of open and honest communication and dedication to service and quality,” Bivacca said.

But the affiliations in no way can guarantee that a rural hospital will avoid further financial problems.

At the time, Phoebe says, Dorminy Medical “was in such distress that without Phoebe, it would not have been able to make payroll.” Over several years, Phoebe loaned the Authority more than $2.5 million and advanced it many millions to draw more primary physicians and provide essential infrastructure, CEO Scott Steiner told the AJC.

“I would hate to see what would have happened not only to the state, to this community, to the nation as a whole if all these rural hospitals would have started closing right before COVID hit or in the middle of a COVID pandemic.”

– Tyler Williams, current CEO of Habersham Medical Center, which has been on the brink of closure for years

But 2013, Phoebe Putney said it exercised its right to end the partnership. The Hospital Authority then sued for breach of contract, contending that Phoebe Putney was to lease the Dorminy facility.

The suit sat idle until last December, when Phoebe filed to preserve a legal claim that it was owed $23 million in management fees. Four months later, the hospital authority filed an amended complaint stating that in addition to not honoring an agreement to lease the facility, Phoebe had not delivered on promises to recruit physicians, increase the hospital’s market share and finance “all needed renovations and improvements in equipment.”

In Cuthbert, Phoebe Putney held a management agreement to operate Southwest Georgia Regional Medical Center for 23 years. But the arrangement, requiring the hospital to support the salaries and benefits of its CEO and chief financial officer and pay a $5,000 annual fee, couldn’t turn the hospital around. The hospital has announced it will cease operations in late October.

When the closure was announced, Cuthbert Mayor Steve Whatley, who also acted as chairman of the Randolph County Hospital Authority, told the AJC the facility would have likely shuttered earlier without the support from Phoebe Putney.

But others said Phoebe Putney had not done enough to address some of the problems that led to the closure. There had been no significant upgrades to the building in 20 years. As a result, the only solution would have been to replace it. Yet, it would have been futile to try to lure an investor to pony up the cash.

And, even if a new building would have taken its place, “you’d still not be able to pay for it,” said state Rep. Terry England, R-Auburn, chairman of the House Appropriations Committee.

In response to AJC questions, Steiner said in a written statement that the healthcare provider “did all it could” to support the Cuthbert facility.

Many healthcare organizations charge tens of thousands, sometimes millions a year, to help manage rural hospitals. And while the rural hospital was expected to reimburse Phoebe for executive compensation, it likely saved it a million dollars under the cost-sharing agreement, the statement said.

“We understand and appreciate the disappointment and frustration of the people of Randolph County…,” Steiner wrote. However, “anyone who states or insinuates that Phoebe, in any way, contributed to SGRMC’s financial difficulties simply doesn’t know the facts.”

The taxpayers of Emanuel and Habersham counties live in opposite corners of the state but have at least one thing in common: They’ve been saddled with bond obligations that their communities cannot afford for hospital facilities that struggle to stay open.

Just before the 2008 recession, governments in their communities approved multimillion-dollar bond packages to help modernize their hospitals. In Habersham, up to $38 million in bonds were sold to build a 24-room outpatient surgical suite, as well as an emergency department with more than a dozen beds. In Emanuel, about $10 million went to support a remodel.

To pay off the bonds, Emanuel County must hand over to the hospital 40 percent of money collected from its special-purpose local-option sales tax. That leaves few dollars for road repairs, infrastructure improvements and other essential services, said County Administrator Guy Singletary. “In a rural community like ours to have to support an agency that is using 40 percent of your SPLOST, that really hurts.”

Like other rural communities, Emanuel draws from an area with high numbers of people with colon cancer, diabetes, hypertension and other chronic ailments. The median income per household in the county is $30,205 a year, and a quarter of its 25,000 residents live below the poverty line.

As a result, many elderly and poor cannot afford to pay for healthcare. In its most recent fiscal year, when about 930 patients were hospitalized, Emanuel provided roughly $3.6 million in unreimbursed and uncompensated care, federal records show.

Habersham’s hospital has been on the brink of closure for years, said Tyler Williams, its current CEO. Just before COVID-19 hit Georgia, he said he had to request a line of credit from the county to try to stay open.

“I would hate to see what would have happened not only to the state, to this community, to the nation as a whole if all these rural hospitals would have started closing right before COVID hit or in the middle of a COVID pandemic,” Williams said.

About a fifth of Habersham’s 45,000 residents live below the poverty line, and its median household income is $40,192 a year. The hospital provided more than $5.7 million in unreimbursed and uncompensated care last year, when about 1,640 were hospitalized, federal records show.

Yet Habersham is in an enviable position compared to others. Its bonds have been restructured under a contractual agreement with Northeast Georgia Health Systems, the region’s largest healthcare system.

As part of the deal, NGHS has agreed to contribute up to $3 million a year to help retire the bonds and to support services at Habersham Medical Center. Then, after five years, NGHS will become the rural facility’s new owner.

It took years of negotiations to come up with the strategy, said Natalie Crawford, who was chairman of the Habersham County Commission when the bonds were refinanced in 2014 and when the deal with NGHS was struck. “We had to work together to save our hospital, to stop the bleeding,” she said.

Joe and Sara Reed have every interest in keeping the door open of their rural hospital in Monroe County. Sara has been a volunteer at the hospital, while Joe, a retired educator who suffers from kidney stones, wants to make sure he has access to quality medical care close to home.

But every year, he says, that goal becomes more elusive.

For example, last year, Monroe County Hospital had no long-term debt. This year, a debt of $10 million appeared on the books after a renovation. The hospital recently saw $1.8 million in unreimbursed and uncompensated care. It also reported over $3 million in total bad debt expense, records show.

The Reeds participate in the Rural Hospital Tax Credit, which allows state taxpayers to receive a tax credit when they contribute to an eligible hospital. In 2018, the hospital received nearly $1.3 million as part of the program.

But some red flags have been raised about the program, including a state auditor’s report that found the funds were not reaching the intended and most cash-strapped hospitals with the largest number of elderly and poor. That’s largely because hospitals in more socioeconomically disadvantaged areas have fewer donors.

Scott, the Emanuel Memorial CEO, said the funding to his hospital shrunk to about $300,000 this year compared to roughly $1 million in prior years. But he is not complaining.