President Donald Trump and Democrat Joe Biden lashed out at one another Tuesday in a chaotic first debate of the 2020 campaign, a showdown that revolved more around angry interjections and bitter sparring than any consequential policy discussion.

Trailing in the national polls, Trump seemed on a mission to rattle his Democratic challenger from the start, interrupting him repeatedly during an opening question about the U.S. Supreme Court vacancy left by the death of Justice Ruth Bader Ginsburg.

Within minutes, the duel devolved into a cacophonous back-and-forth as moderator Chris Wallace tried, often in vain, to bring order to the ugly affair. Sometimes, all that could be heard was shouting. Biden, visibly frustrated, called Trump a “clown” and snapped: “Will you shut up, man?”

That came after Trump repeatedly pushed him to say whether he would try to “pack” the Supreme Court after the president pushed a vote on his appointment of a conservative jurist, Amy Coney Barrett, to replace Ginsburg before the election.

“We won the election. Elections have consequences,” Trump said. “We have the Senate. We have the White House. And we have a phenomenal nominee respected by all.” 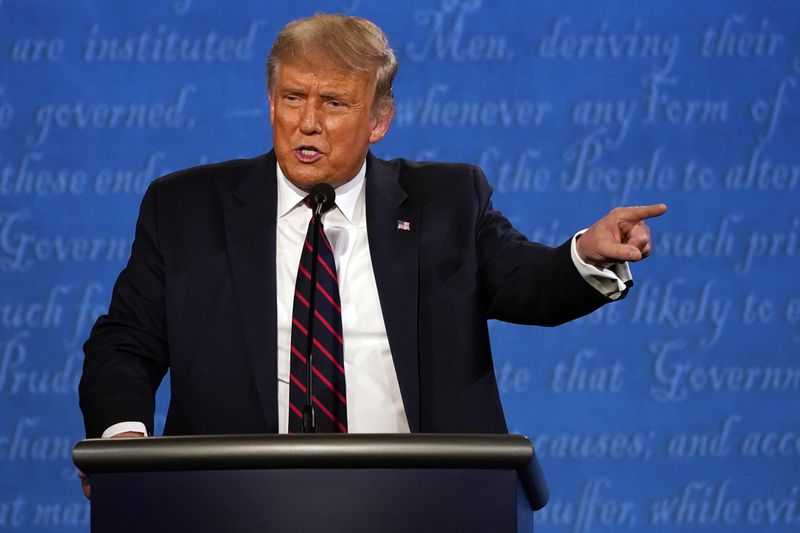 It was a sign of what was to come: A free-wheeling and often uncontrollable confrontation that revealed little new about how the two would handle the crises facing the nation.

The president entered the Cleveland showdown seeking to eat into the former vice president’s lead in national and battleground state polls.

He painted a dystopic view of Biden’s eight years as Obama’s vice president, claiming he inherited an economy in ruins and a “mess” of a health care system. And he accused Biden of being an empty vessel for “radical left supporters” who would usher in economic turmoil with a victory.

Still, Trump was knocked back on the defensive, including when pressed on whether he would condemn white supremacists and paramilitary groups. Asked to criticize the far-right Proud Boys, Trump pointedly refused to do so.

“Proud Boys, stand back, stand by,” he said. “But I’ll tell you what, somebody’s got to do something about antifa” – he said of the anti-fascist movement – “and the left because this is not right-wing problem. This is a left-wing problem.”

And Trump said he was “counting on” the Supreme Court to probe election results at the end of a cascade of false claims that there is rampant voting fraud involving mail-in ballots, predicting a “fraud like you’ve never seen.”

Ignoring the president for a moment, Biden instead stared directly into the TV camera: “He’s just afraid of counting the votes.”

Seeking to pivot to the offensive, Biden framed Trump as a rogue president who purposefully downplayed the coronavirus pandemic to protect his election chances, part of a broader effort to frame the election around the president’s handling of the outbreak. 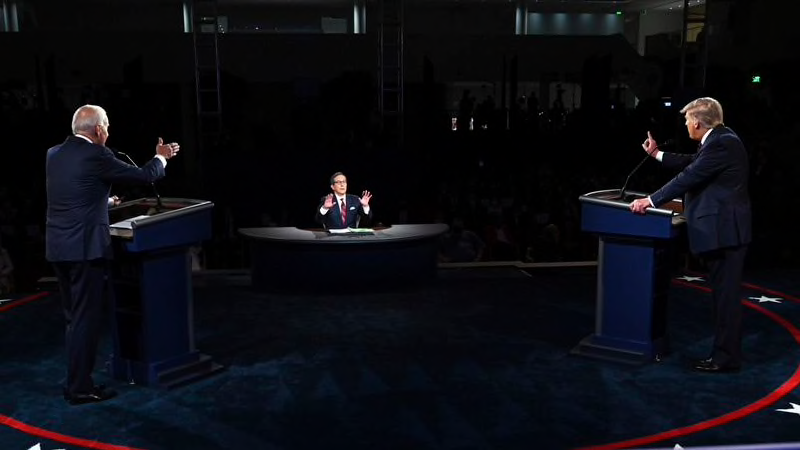 “He panicked or he just looked at the stock market. One of the two. Because guess what?” Biden said. “A lot of people died. And a lot more are going to die unless he gets a lot smarter, a lot quicker.”

And when Trump pivoted to a law-and-order argument, claiming that a Biden victory would mean the end of America’s suburbs, the former vice president fired back.

“He wouldn’t know a suburb unless he took a wrong turn.”

Despite the tumult of the past year and the unpredictability of what’s to come, the debate took place amid the backdrop of a remarkably stable race.

Biden has held a steady advantage amid the most turbulent of election years, as a still-raging pandemic, protests over racial justice and Ginsburg’s death haven’t appeared to fundamentally change the dynamics.

Trump’s campaign cast the duel as a game-changing moment to address tens of millions of voters with echoes of the message the president delivered in Atlanta on Friday: that Biden’s record in 47 years in public office in Washington pales in comparison with Trump’s achievements in one term in the White House.

“I’ll tell you, Joe, you could never have done the job that we did,” Trump jabbed at one point, after Biden blasted his coronavirus strategy. “You don’t have it in your blood.”

Biden was keen to emphasize Trump’s response to the outbreak — an area where he’s outpolled the Republican. His guests telegraphed that focus: They included Kristin Urquiza, who delivered an emotional address about her father’s death from COVID-19 at the Democratic National Convention.

“Under this president, we became weaker, sicker, poorer, more divided and more violent. When I was vice president, we inherited a recession,” Biden said. “I was asked to fix it. I did. We left him a booming economy. And he caused a recession.”

The blockbuster disclosure of Trump’s tax records also entered the fray even before the showdown began. Hours before the debate, Biden released his 2019 tax returns, which revealed he paid about $300,000 in taxes that year. Trump, by contrast, paid just $750 in federal income taxes in 2016 and 2017, according to the New York Times report.

Pressed by Wallace, Trump insisted that he paid millions in taxes but wouldn’t specify how much he federal income tax he dished out. It would be “stupid,” he added, not to take advantage of loopholes written into tax law.

As he spoke, Biden tore a page from Trump’s playbook by interrupting his opponent.

“Show us your tax returns.”