Some Fulton County voters will cast their ballots inside an election precinct on wheels.

County officials gathered Thursday to unveil a new mobile voting vehicle. When voters walk inside, they will be greeted by poll workers to check them in before using voting machines separated by folding partitions.

There’s even a small air-conditioning unit.

Officials claim the vehicle is the first of its kind in Georgia. Costing roughly $350,000, the vehicle is Fulton’s latest tool to help avoid the debacle seen nationwide during the June election, which featured some voters waiting all day in lines and many voters who never got their mail-in ballots.

Voter turnout for November’s presidential election is expected to be much higher than June’s primary.

“We took every lesson from June,” said Fulton County Manager Dick Anderson. “Any tech problems can be resolved and resolved quickly.”

Following June’s hiccups, the county doubled the amount budgeted for elections to $34 million, which Anderson said accounts for 5 percent of the county’s general fund.

The vehicle holds eight ballot-marking devices that voters will use to select candidates, one scanner where voters will feed their printed selections and two places to check in on polls pads.

Those poll pads, which are tablets poll workers use to make sure people are properly registered, concern Fulton Commission Chairman Robb Pitts, who has been critical of the equipment selected by the state.

Pitts said some poll pads became inoperable due to technical problems on Tuesday during the special election to fill the seat of late Congressman John Lewis. He said the manufacturer has assured them the issue was fixed.

Fulton elections head Richard Barron said he is encouraging people to vote early or by mail to avoid those issues, long lines and reduce risk of COVID-19. He said that 150,000 ballots are already in the mail, which is about a quarter of Fulton’s registered voters.

For those who chose to vote in person, Barron said there’s another vehicle set to be delivered from the Ohio-based manufacturer Farber in the coming weeks.

The vehicles will also be used to react to polling locations that have long lines. The vehicles are able to zip around the county to fill any gaps should a precinct go down. But it might have trouble keeping up with Ga. 400 traffic, the speedometer only tops out at 100 mph. 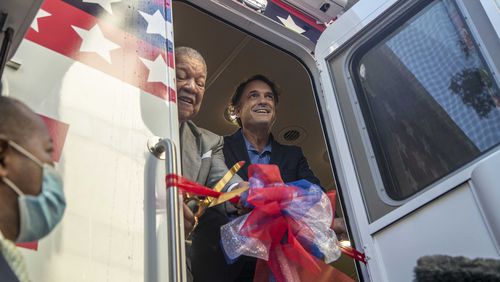