The message was simple: If you run into trouble with the cops, tell them to call us.

“We’re from PAD, the Pre-Arrest Diversion Initiative. … We’ll come pick you up so you don’t have to get arrested, OK?”

Donia Hanaei repeated the directive dozens of times as she walked around downtown Atlanta one recent afternoon, handing out snacks, water and masks to people sitting around Woodruff Park, many of whom were homeless. Hanaei, whose formal title is “harm reduction specialist,” explained that if they are ever at risk of being sent to jail for a minor criminal offense, PAD can help provide them with an alternative.

The work she’s doing may provide one answer to calls from local and national activists to reimagine public safety and focus more on social support for low-level offenders.

While the Atlanta/Fulton County Pre-Arrest Diversion Initiativebegan as a two-year pilot program in just two police zones, it is now on the verge of expanding citywide. Leaders hope an influx of new funding and an enhanced partnership with the Atlanta Police Department will ultimately keep more vulnerable people out of the criminal justice system and instead connect them with the social services they need. 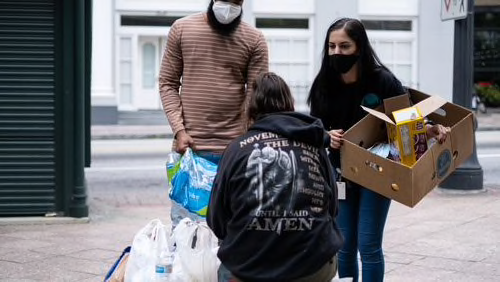 Since its inception in 2017, PAD has helped over 200 people who were set to be arrested for minor offenses by diverting them to resources like a homeless shelter or rehabilitation program to address substance abuse issues.

Public support for the program has grown among Atlanta’s city leaders in the wake of recent civil rights protests and calls to reevaluate the work of the city’s police department. The diversion program could help reduce communities’ reliance on standard policing for low-level offenses by directly addressing problemsstemming from extreme poverty, mental health issues or substance abuse, said Moki Macias, the executive director of the initiative.

In June, the Atlanta City Council allocated about $1.5 million to the PAD program — funds that came out of a trust fund for the city jail, which officials are in the process of closing.

In August, Mayor Keisha Lance Bottoms signed a series of administrative orders focused on police reform, including a directive for Atlanta police to partner with PAD and train officers across the city.

“The citywide expansion of PAD is a significant step toward ending a cycle of incarceration for non-violent offenders by addressing the root of many issues these individuals may face — including substance abuse and mental, physical and economic challenges,” a spokesman for Bottoms’ office said in a recent statement.

The diversion program is modeled after similar programs in Seattle and Albany, New York. Macias said some people were being arrested over and over again for low-level, non-violent crimes like public urination or trespassing, but the underlying issues that led to those offenses were not being addressed.

“These community concerns are valid concerns, but that we all know that addressing them through an ongoing cycle of enforcement and punishment is not actually changing the behavior,” she said. 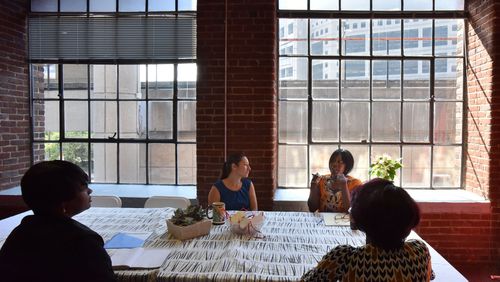 Over the last several years, PAD has largely relied on direct referrals from officers officers in zones 5 and 6, which cover downtown, Midtown and East Atlanta. If an officer comes across someone who could benefit from social services, they can directly call PAD instead of arresting the person.

Sometimes, they get calls from the community. After doing outreach in Woodruff Park, Hanaei and fellow PAD employee Brandon Russ went to check on a woman who was sitting outside a MARTA station in Midtown. A resident in a nearby condo building had called PAD because they saw the woman hanging around the building, but didn’t want to call the police on her.

Of course, Macias has seen her fair share of pushback to the program and heard the argument that if someone is committing a crime, they should be arrested.

“The challenge is that we have all been sort of addicted to arrest in this country,” she said. “We’ve been addicted to the idea that addressing the issue means making somebody disappear.”

In the first few years of the program, Macias said, it has taken time for some officers to fully understand and embrace the PAD model.But she hopes that changes as the program expands citywide and every officer gets the proper diversion training. Eventually, the department plans to include PAD in its recruitment training.

Without PAD, officers sometimes felt like they had no choice but to make an arrest when called to the scene of a minor crime, said Deputy Chief Celeste Murphy, the commander of APD’s Field Operations Division. But “once they got the concept of it, they were extremely open to it,” she said. “The officers are open to anything where we don’t have a repeat situation with those same people.”

By the end of October, PAD hopes to start accepting calls through ATL 311, which residents typically use to report things like potholes or a missed trash pickup. Macias said it might take some adjusting to define what could be handled by PAD, and what signals an emergency call meant for the police.

The new funding will allow the program to go from a staff of 11 to a staff of 26 by next June. Macias said she had always hoped to expand the program, but the events of this past summer sped up those efforts.

“It’s a long-term strategy,” Macias said, adding that it might ultimately require a major cultural shift for Atlantans to realize that “the way we actually effectively address these type of issues is when we start providing the safety net that is needed.”