By Eric Stirgus – The Atlanta Journal-Constitution

University System of Georgia Chancellor Steve Wrigley gave an optimistic summary of the first month of the fall semester at its 26 schools in his remarks last month to the state Board of Regents.

“A remarkable achievement,” Wrigley said of having classes, many in person, at each school amid the coronavirus pandemic.

As Wrigley spoke, a small group of protesters, mostly University of Georgia graduate students, stood outside the system offices near the state Capitol in the light rain. One student delivered about 200 letters with recommendations for system leaders such as allowing students and faculty to participate in classes remotely without the need for medical documentation, free and timely COVID-19 testing, robust contact tracing and no employee layoffs.

“You have the power to save lives,” the group wrote in its letter to Regents chairman Sachin Shailendra. 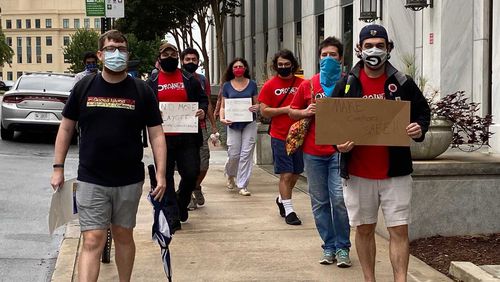 While scores of colleges in other states closed their campuses as the number of COVID-19 cases rose this semester, Georgia’s public university system stayed open amid several thousand positive COVID-19 test results, some fueled by large off-campus gatherings and students not following safety rules. The New York Times reported last week that the University of Georgia had more positive cases since the pandemic began than any college in America.

Now, encouraged by recent numbers from its schools — including UGA — reporting declines in new cases, many of the system’s colleges and universities are already preparing for the spring semester. One potential change for the spring discussed by some leaders, such as Georgia Tech President Ángel Cabrera: more in-person classes. Most University System schools are currently offering courses either online or through the hybrid model, a mix of online and in-person instruction.

“We want to encourage our campus leaders to look at that,” Wrigley said of more in-person classes in a telephone interview with The Atlanta Journal-Constitution. 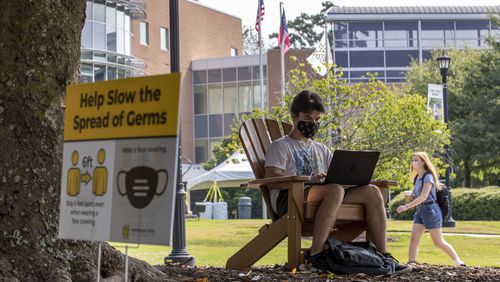 The stakes are high for the schools to show the situation is under control. State lawmakers cut the University System’s budget by more than 10% for the budget year that began in July. There are concerns more cuts are on the way when lawmakers return to the Capitol in January to begin budget plans.

“We’re going to see a real impact of COVID on our budget,” Cabrera said in an address to Georgia Tech students and employees two weeks ago. 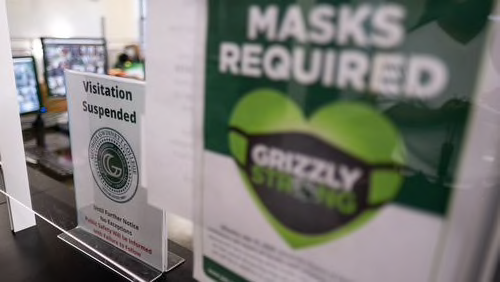 The schools are using different methods to test for COVID-19. Larger schools, such as UGA and Georgia Tech, are conducting more testing on their campuses while smaller schools, such as Georgia College, are partnering with local health departments and private services to assist with testing.

The differences raise one of several complaints among critics. They want more testing, particularly for students not showing symptoms since research shows asymptomatic people can carry the disease. System leaders have not indicated any plans for additional testing.

Testing is voluntary in the Georgia system. Private universities with large bank accounts, such as Cornell, Harvard and MIT, are requiring students to get tested up to three times a week. Three of the four Georgia public universities with $1 billion total budgets — UGA, Georgia State and Georgia Tech ― have committed about $8 million combined toward various forms of testing. However, fewer students at those three schools have sought testing in recent days, according to data on their websites.

Augusta University, the fourth university with a $1 billion budget, has a testing program that is being funded by Augusta University Health, a separate nonprofit, as part of its affiliation as the state’s only public academic medical center. 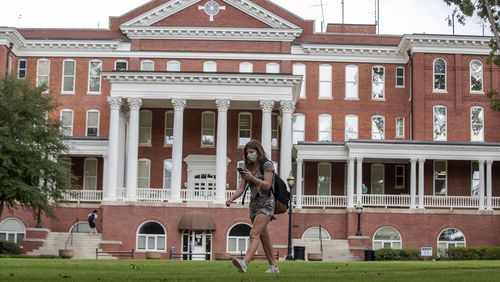 Georgia’s public universities began planning for the fall semester shortly after closing the campuses in mid-March. As this semester approached, and cases rose around the state, many faculty and students urged the system to go to remote learning, which most of the state’s private colleges and universities decided to do. The public schools moved forward with its plans to reopen the campuses, saying students needed it, particularly those from low-income backgrounds that research shows are having greater trouble with online learning.

“It is our mission, it is our obligation to provide and meet their educational needs,” Wrigley said. “I feel strongly we have to do everything we can to carry that mission out, obviously in a healthy and safe manner.”

The University System, after pressure from faculty and students, required they wear face coverings in classrooms and enacted other social distancing rules. Through August, four schools, UGA, Georgia College, Georgia Southern and Georgia Tech, each reported more than 500 cases, which ranked among the highest totals in the nation.

Administrators attributed the numbers to off-campus student gatherings, particularly by fraternities and sororities. Those schools and others began campus public relations campaigns warning students to abide by the rules. Through early September, the University System’s four largest schools, Georgia State, UGA, Kennesaw State and Georgia Tech, reported 63 combined complaints of people not following campus social distancing rules. School officials either said they could not disclose how the complaints were resolved or said they were handled without any disciplinary action. Those four universities’ combined enrollment last year was more than 165,000 students.

A sobering scene in Athens

Much of the focus in recent weeks has been at the University of Georgia. Around Labor Day, UGA reported about 1,500 cases in one week.

On a recent Saturday night, hundreds of students waited in line, many shoulder to shoulder, to get inside about a dozen bars and nightclubs near the UGA campus. About half of the partygoers wore face masks. The rest did not. Some venues did temperature checks before allowing patrons inside. 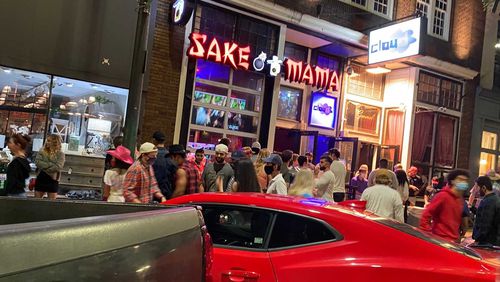 This is not social distancing, and that bothers third-year student Maia Gibson. She was infected with COVID-19 at the start of the semester after an evening downtown with some classmates.

“I thought I don’t want to expose my family to it, but if I get it, I’ll be fine,” said Gibson, 20, a marketing and international business major from Alpharetta.

Gibson said she had a fever, headache and some sinus pressure. She recovered in her home near campus.

Now, she wants classmates to be more vigilant about following social distancing rules and regulations.

Gibson, who’s taking most of her classes online, doesn’t believe UGA should have in-person classes. She wants the university to do more asymptomatic testing.

“I believe that anyone who has been exposed should be tested ASAP despite the existence of symptoms,” she said. 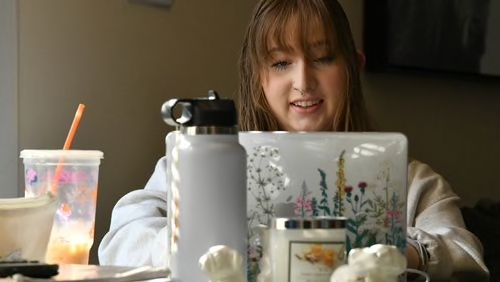 UGA on Wednesday reported 63 new positive cases in the most recent seven-day stretch, its lowest total since before the start of the semester.

Some national experts have decried the burden colleges have put on students to keep COVID-19 numbers down by expecting young people to be more responsible in keeping socially distant. College is, they say, by design a social construct in which young people learn how to navigate adult relationships through fraternal groups, football games and bars.

Colin Smith, a clinical assistant professor in the School of Public Health at Georgia State University, said that may be true of past generations, but current 18- to 22-year-olds practice a more digital socialization that can make social distancing work.

“They are more likely to be Generation Z and have grown up with all kinds of technology, which allows them to be in more instantaneous communication with their peers without physically being connected to them,” he said.

On the other hand, he said concerns about face-to-face contact is real and colleges need to be aware that the push to open played a role in falling enrollment at some schools. Georgia State’s public health program, for instance, has had robust enrollment, but that’s because 95% of its courses are offered online.

“We have had no problem filling classes,” he said. “Some individuals thought that students would not want to come if they didn’t have an interpersonal in-class experience. But in our case at least, we believe in hindsight that students just wanted to feel safe.”

At Clayton State University, one of the first schools to open, about 42% of courses are taught in person on campus with the remaining work handled remotely online, said Jill Lane, its associate provost. No classes are held back to back in the same room.

The south metro school, which has an enrollment one-sixth the size of UGA’s, reported two cases in a recent seven-day stretch.

In addition to COVID-19, Clayton State and officials at other schools are worried about another health issue: the flu. Public health officials have warned the flu could leave patients more vulnerable to a severe attack of COVID-19. Coming down with both at once could be devastating. The school is considering several services for students and staff to get flu shots.

University of North Georgia professor Matthew Boedy, who has been critical of some aspects of the reopening plans, believes January will be a risky time as everyone comes back for the spring semester after more than a month away from their schools. It will also be the height of flu season. Fewer students are coming to his classes on campus. Boedy said there will be a greater expectation for students to attend classes when they’re on campus.

Boedy, conference president of Georgia’s chapter of the American Association of University Professors, worries attempts to return to a more traditional campus experience by January “will only make people drop their guard against the pandemic.”

The Georgia universities that previously had several hundred cases in August have dropped to single-digit totals in recent days.

No one is ready to light a victory cigar.

“We have a long way to go and we have to remain vigilant,” Wrigley said.

Wrigley said the greatest lesson learned thus far is his office and its schools could have better communicated the fall plans.

Georgia Tech and UGA are among the schools that have unveiled some initial spring plans. UGA said in a letter last week that faculty wanting to teach remotely should still have some in-person component “to ensure that all students have the opportunity for learning effectively.” Online teaching, the message said, “will be approved only if other accommodations for in-person instruction are not available.”

To limit the virus’ spread, Georgia Tech has revamped its calendar. No spring break next year.