By Wendell Brock, For the AJC #atlanta-ga

The Korean fried chicken is a product of masterful technique. Twice fried, and glazed with a sweet, not-too-prickly sauce, the skin crackles when you bite into it.

The ramen is a long-simmered labor of love. The Korean-born restaurant owner with no formal culinary training spent years on a quest for the perfect broth, and he succeeded.

Yakitori Jinbei — a small Japanese-Korean restaurant tucked away in a nondescript shopping center — is that classic hole-in-the-wall with terrific food. Owner Jae Choi makes it all look easy, but he’ll be the first to tell you it hasn’t always been that way.

As a young man growing up in Chicago, he wanted to go to culinary school, but his parents told him: “That’s not why we came to America.” So, he put his dream on the back burner, became a successful optometrist, and, after selling off an eye-care business with five Atlanta stores, purchased Yakitori Jinbei in 2017.

Little did he know he had bought a problematic restaurant.

In June 2018, the business hit bottom. “Sales were abysmal,” said the 43-year-old father of two. “I told my mom: ‘You were right. I should just get out of this and go back to being an optometrist.’” He quietly put Jinbei up for sale.

“And, then, this crazy miracle happened.” 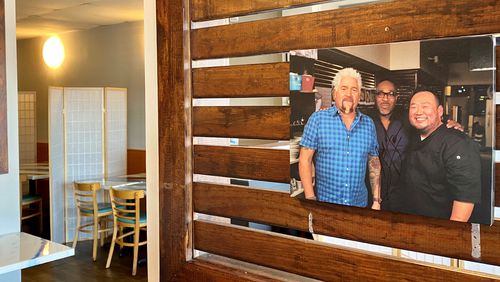 The game-changer was a call from Guy Fieri’s “Diners, Drive-Ins and Dives.”

Choi thought he was being pranked. But, Jinbei made the cut, and the Food Network show aired in February 2019. The appearance catapulted the humble spot to stardom. It also gave the restaurant the financial stability it needed to make some renovations, hire an accomplished sushi chef and weather COVID-19.

Recent pandemic challenges “reminded me of our original days when we did no business,” Choi said. “I’m grateful we went through that period, because it allowed us to go, ‘OK, well, what do we do now? We need to regroup.’”

Even before COVID-19, Choi wanted his takeout ramen to be manageable for customers who might need to eat in their office, hotel or car. Jinbei’s pre-cooked noodles come in recycled plant-fiber bowls that can withstand the heat. (Just dump in the hot broth, and you’re ready to slurp.) Thanks to the recent upswing in takeout, however, he has had to procure vented plastic foam containers for the hot chicken. 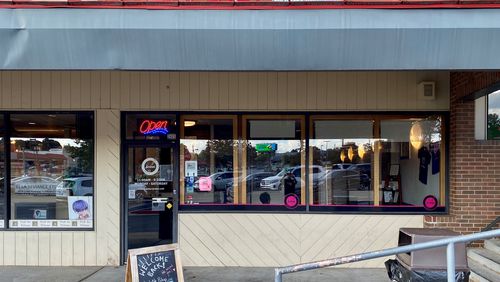 Today, Choi and his new sushi chef, Joseph Kwon, work in true collaboration, but the owner has the final say. “It’s gotta taste good,” said Choi, who, as it turned out, purchased another optometry practice in Peachtree City in 2018, and sees patients part time.

One thing Jinbei doesn’t serve is its namesake yakitori (head-to-tail chicken, grilled on skewers over charcoal). “It’s a lot for my kitchen right now,” he said.

Still, there’s no way he’s going to rename the restaurant, not since “Diners, Drive-ins and Dives” made it famous. “That would be the biggest advertising blunder ever.”

Menu: Japanese and Korean classics and contemporary sushi; no yakitori at the moment

What I ordered: Korean fried chicken; naruto ramen; buriburi roll; tuna carpaccio. Exceptional fried chicken; bright, clean-tasting fish. I would so love to have this place in my neighborhood.

Safety protocols: sushi bar is closed; Japanese bamboo screens have been placed between tables; masks encouraged, but not required