Editor’s note: With live music and concert reviews on hold due to COVID-19, The Atlanta Journal-Constitution is focusing on how Georgia musicians are spending their time in our feature, Mic Check.

One would think that Alex Thrift stayed plenty busy as the lead guitarist in Rumours, the Atlanta-based Fleetwood Mac tribute band that has gained international renown since its 2014 birth and its companion band, Runnin’ Down a Dream, a Tom Petty tribute outfit.

But when the pandemic stymied Rumours’ touring plans — aside from a few private gigs they’ve played each month — Thrift figured it was time to embark with some other musician friends on a tossed-about idea to form an original band.

Along with bassist Jim Ramsdell (who also plays in Rumours and the Petty band), singer/guitarist Dustin Barclay (also from the Petty unit), drummer Matt Donald and keyboardist Jimmy Graft, Thrift established The Wait.

The band recently released a five-song digital EP on all streaming platforms and in August unveiled an Atlanta-centric video for “The Prestige.”

So now, Thrift is juggling three bands, along with a 6-month-old baby with wife Mekenzie Thrift, who fronts Rumours in the Stevie Nicks spotlight role.

On Oct. 9, Rumours — which, along with Thrift and Jackson includes drummer Daniel Morrison, singer/keyboardist Adrienne Cottrell, guitarist/percussionist Doug Easterly and bassist Ramsdell — will play the Coca-Cola Roxy for the first somewhat large indoor show in Atlanta since March.

Here’s what Thrift had to say:

Q: Are you worried about being back on a big stage in a big venue?

A: It’s sold out, so from that standpoint, it’s a success. I don’t see why it wouldn’t work, but it’s going to be weird playing for 500 people in a big room (the venue capacity is 3,600, but tickets were capped at 500). We’re obviously really excited about it. We don’t get near anyone when we play, and we’re pretty liberal in the sense of, I’m not interested in getting around a bunch of people and exposing myself to [COVID-19.] We used to do a meet and greet at every show; obviously, we’re not gonna do that now. I wear a mask anywhere I go, though I probably won’t wear one on stage. There’s something about Rumours that is magical. People just love Fleetwood Mac, and I give credit to Mackenzie because it was her idea (for a tribute band). I wasn’t a big Fleetwood Mac fan growing up. Pearl Jam was my wheelhouse. 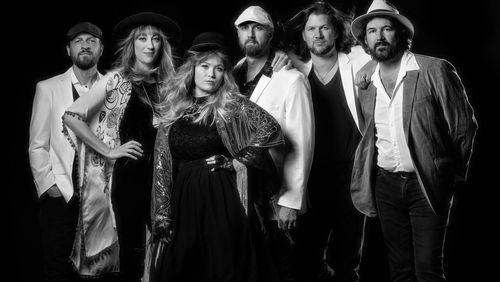 Q: So along with playing in Rumours and Runnin’ Down a Dream, you put together a new band in your ‘downtime’?

A: At one point, our singer in the Petty band (Barclay) said, we should write original music. And I was like honestly, I don’t have time. We were touring with Rumours three days a week, every week. But he had some ideas, and then COVID hit, and I was like, ‘Hey, that idea you had… we have nothing else to do, so let’s see what we can come up with.’ This band is writing songs effortlessly. Hopefully, people like it. We vowed to make a vinyl record this year, but we might not have time to do it. We’re back to writing now and are about seven songs in. This has been such a difficult year. If I didn’t have that project, I don’t know where I’d be mentally. I had a baby this year, which is a big deal, too. But from a creative aspect, you need to have something going on.

Q: How would you describe The Wait’s music?

A: There have been a lot of comparisons to (Tom) Petty, but I don’t hear it at all. It’s very much just rock. Music right now, in my opinion, everybody wants to be Tame Impala. From a rock perspective, that’s what everyone is doing, but no one is doingrock. No one is doing guitar solos. Let’s bring them back, and traditional chord progressions. There’s Americana in it for sure, and a very ’80s-New-Wave thing going on, too. A little bit of Interpol. I’d say indie-Americana-rock.

Q: What have you been listening to?

A: Mostly ’70s stuff. I’m a big Bowie fan. Television’s “Marquee Moon,” Talking Heads. That whole ’70s era, that’s my favorite music ever made. Marc Bolan — I’m a big T-Rex fan. We’re covering “20th Century Boy” on (The Wait) record. The Cure’s “Standing on the Beach” and Peter Gabriel’s album (“Peter Gabriel”) with “Intruder” and “Games without Frontiers” are the last things I listened to. I don’t listen to music in the car. I toured for five years and had to listen to everybody’s music, so I don’t like to listen while I drive. I like the silence.