By Jon Ross, For the AJC #atlanta-ga

The Atlanta Symphony Orchestra’s 76th season commenced with a bird’s-eye view of the stage. Thirty-five musicians sat at attention, spread out among the expanse. The scene swooped away to a close-up of music director Robert Spano’s downbeat, revealing a picture of isolated, masked musicians wearing tuxedos and ball gowns. The music they began to play, Mozart’s “Jupiter” symphony, revealed a sprightly and joyful sound that felt slightly anachronistic in these digital realities.

The ASO joined Mozart’s symphony Thursday with the Beethoven violin concerto, performed by guest artist Gil Shaham, to open its greatly reimagined 2020-2021 season. Thursday’s audience actually watched a recording of a live performance, beamed through the ASO Virtual Stage, that can be accessed through Sunday night for subscribers.

On opening night last year, anticipation buzzed through the air. Once patrons found their seats and the lights dimmed, their focus centered on the orchestra for the majority of the two-hour concert. The sound, no matter what acoustic peccadillos permeate Atlanta Symphony Hall, was crystalline and, at times, thrillingly loud. On Thursday, the ASO had the herculean task of recreating that same excitement amid the endless distractions listeners face when tuning in from the comfort of their couches. Symphony-goers are eager for live music; everyone at the ASO knows that. The trick now is to bring a captivating series of concerts to subscribers in their homes.

An array of robotic cameras and stringent COVID-19 safety protocols made the performance a reality. Did the ASO perform well despite these circumstances? Yes. Strings danced across jaunty themes in the Mozart symphony; Shaham played with exquisite agility in the Beethoven. Was watching an HD feed on a laptop, ears cocooned in headphones, an ideal way to see the ASO perform together for the first time since March? Of course not. But with robust, clear sound and the chance to see inside the orchestra thanks to numerous camera close-ups, opening night was an enjoyable, albeit different, experience. 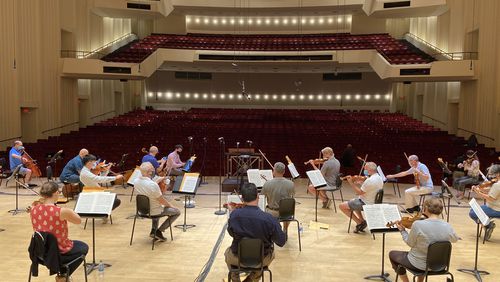 During the performance, string players, percussionists and the conductor wore black, branded ASO masks. The woodwinds, to mitigate the aerosols created when playing their instruments, performed separated by plexiglass partitions. Masks were, of course, not practical for these performers, so they were distanced at least 10 feet, front to back, from their colleagues. Behind the scenes safety protocols included COVID testing, and daily temperature checks and health assessments.

Current circumstances call for agile programs. The ASO had intended to open the season with Beethoven’s fifth symphony, but safety protocols made staging expansive works impractical. Across five more recorded concerts broadcast through the ASO Virtual Stage, the orchestra will focus on mostly treasured baroque and classical works, which were written with smaller ensembles in mind. Compressed rehearsal times and the limits placed on the orchestra mean the performance of more contemporary classical pieces is unfeasible.

Performance plans are fluid (this opening night concert was originally set to air Sept. 26), but the ASO’s adaptability and the ability to perform under extraordinary circumstances should be celebrated.