Marietta-raised television director Angela Barnes knew she was doing something different when she combined $12,000 and seven Atlanta strippers with the goal of getting young Black men to vote.

But she didn’t expect to create a viral online moment, which is exactly what happened last week.

Her non-partisan group “Get Your Booty to the Poll” released an ad featuring strippers doing what they do — but for democracy. They made it rain ballots and shook “I Voted” stickers stuck to their posteriors in front of patriotic imagery.

Then they explained why voters should care about often-overlooked local races, and not just the presidency.

Want a district attorney who’s fair? You elect the DA. Want coding taught in classes? Select your school board member. Want to end cash bail? Vote for your local officials, including the sheriff.

Barnes and her fellow Black women attracted millions of eyeballs while addressing the exact issue on which high-power campaign teams are spending truckloads of cash: voter turnout.

With a razor-thin margin between two polarizing presidential picks and an increased focus on issues facing African-American communities, turnout is going to be key come November. And the group of voters who present the largest opportunity is young Black men, according to data collected by the Georgia Secretary of State’s office.

Of men age 18-34, African Americans had the lowest turnout among any listed racial group of men during the 2016 presidential election in Cobb, DeKalb and Fulton counties, according to an analysis of the data. Men who identified as Native American had the lowest turnout for Gwinnett, and were followed by Black males.

Barnes said she wanted to connect with those Black men who feel voting and its outcomes aren’t for them. And having grown up in the metro area, she knows strip clubs are a big part of the culture — including its massive influence on hip-hop.

Many would disagree, but Barnes said the advertisement wasn’t made for them. And think about all the people that standard political ads exclude, she said. 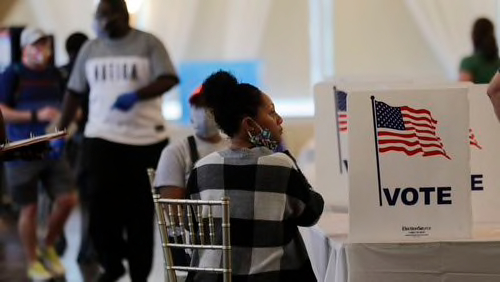 Some found the advertisement silly, but others found it insidious. Many online commenters said the ad plays on negative stereotypes that women gyrating is what it takes to get the attention of Black men, as opposed to good policy.

Lindsey said she’s also seen people online who are dismissive of the Black women using their skill for political speech.

“I think there’s an easy way to read this as pandering and being dismissive of Black votes, but that evacuates all of the power from those women,” Lindsey said.

One of them is Nikki St. John, who dances at Blue Ivory under the name Trinidad (her dad is from the island). Before getting the script, St. John said she didn’t know she had a say in who becomes district attorney.

“I get frustrated because of all the things happening in our country right now and it could be avoided if we voted for people who share the same concerns that we share,” she said. “… The people that we elect at local office, those could be the people that could be running for a state office and then a national office down the line.”

Andra Gillespie, an Emory University political scientist, said the ad may not drive turnout, but it started an important conversation.

“I thought the substance of what they said was really cogent,” Gillespie said.

Barnes said she chose the substance carefully, but she needed help. So she enlisted Mondale Robinson of the Black Male Voter Project, who refined the issues mentioned in the spot.

Robinson said he tested the ad in front of 30 to 40 Black men with inconsistent voting patterns. First he played a Joe Biden ad. It got minimal response. Then he played Barnes’ ad. It got a standing ovation.

He said people often mistake Black men not voting for apathy, and that’s not the case.

“Voting is seen as a hobby to Black men because it hasn’t cured their plight,” he said. “(Not voting is) a critique of the system itself.”

Barnes said she knew she was appealing to only one of many types of Black men.

“This ad was not meant to target all Black voters or all Black male voters,” Barnes said. “… I made it for the guys in Atlanta that are into that culture.”

“We don’t have the luxury of deciding who votes and what they’re influenced by,” she said.

“They are not on traditional media, in general, but their buying power is also increasing,” he said. “From a marketing point-of-view, they are an attractive segment.”

He said groups spend much more than the $12,000 that Barnes raised on GoFundMe for smaller impact. While it is difficult to determine the its exact reach, the ad has been re-posted countless time online and was featured Sunday on HBO’s comedy news program “Last Week Tonight” with John Oliver.

Barnes, who describes herself as a “tree-hugging liberal,” said she doesn’t usually do political work and kept the ad non-partisan because it’s really about getting young Black males to be heard and cast ballots — whoever they vote for.

“The thing I care about most is my children, and those are Black boys who are one day going to be Black men,” she said.