The four Democratic candidates running for a spot on the Cobb County Board of Education have released their own resolution denouncing racism after current board members could not pass their own declaration.

The candidates, Lindsay Terrebonne, Julia Hurtado, Dr. Vickie Benson and Leroy Hutchins, said the incumbent school board members’ inability to rally around an important issue “speaks volumes to the ineptness and dysfunction” of the board, according to their press release.

The Cobb County School Board spent the summer debating the language of a proposed resolution, and could not agree on whether the phrase “systemic racism” should be part of its wording. Most recently, at a meeting in August, board members were unable to approve a resolution.

The Democratic candidates said in their own resolution they are “saddened and outraged” by the deaths of George Floyd, Ahmaud Arbery and Breonna Taylor, three black people whose deaths at the hands of police and vigilantes have sparked nationwide protests. Those protests have highlighted “systemic racism and injustice that have long persisted in our country, state and county,” their resolution said. 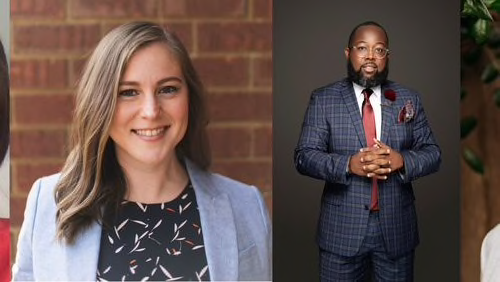 The candidates also condemn racism and hate in schools and society, affirm that Black lives matter and “recognize the urgent need to ensure that equity is at the center of everything we do as a school district,” according to the resolution.

Hutchins told The Atlanta Journal-Constitution that the candidates felt it was time to show school board incumbents that it “should not have been that hard” to condemn racism.

“We knew we had a leadership problem with our board and it was up to us to show Cobb County what leadership looked like,” said Hutchins, who has no opposition and will succeed retiring board member David Morgan.

School board member David Chastain, who is not up for re-election, said the candidates were able to come up with a resolution because they all share the same political and philosophical world views. The school board could not come to a consensus because its members aren’t on the same political wavelength.

Terrebonne, who is running against Republican board chair Brad Wheeler, said people have told her they are hurt and disappointed by the school board’s inability to speak with one voice against racism.

“We want families know that they are valued and we want to create a safe, learning environment for everyone,” she said.

Randy Scamihorn, who is in a contested race against Benson, said the Democratic candidates “want to pick a fight over political ideology instead of what we can do to educate our children.”

“It’s clear their objective is to indoctrinate, not educate, our children here in Cobb County,” Scamihorn said.