Superintendent Lisa Herring on Monday presented the latest planto the school board. It calls for four-day-a-week, face-to-face instruction to resume Oct. 26 for prekindergarten through fifth grade and some special education students. Families also can choose to continue with virtual learning.

The plan hinges on continued improvement in COVID-19 cases. Officials will look at health data on Oct. 16 to make a decision on if the district can indeed reopen 10 days later.

When APS released the updated proposal late Friday, it triggered a wave of opposition. Over the weekend, the group “We Demand Safety APS” circulated an online letter protesting the enlarged scale of the reopening plan. The plan has grown since mid-September, when the district proposed bringing back fewer grades for only two days per week.

Sara Totonchi, an APS parent and one of the group’s organizers, said 3,500 people signed that letter, including about 1,400 APS staffers, many of whom did so anonymously.

“It is dangerous to ask so many staff and students to return to close contact in school buildings,” she told board members.

The board has said Herring will decide how and when to reopen school buildings, which closed in mid-March amid the pandemic. Board members did not vote Monday or request any major changes to the proposal.

Herring said she expanded her initial recommendation to include more grades and more days of in-person instruction after looking at the continued downward trend of local COVID-19 cases. She said she also listened to feedback and examined the scheduling challenges of going back only twice a week as initially proposed.

Some who oppose the expanded reopening plan believe the district caved to pressure from parents who campaigned for additional in-person options and put up a Midtown billboard touting the message “all kids all day.” But Herring said she has listened to those who favored reopening buildings as well as those opposed. 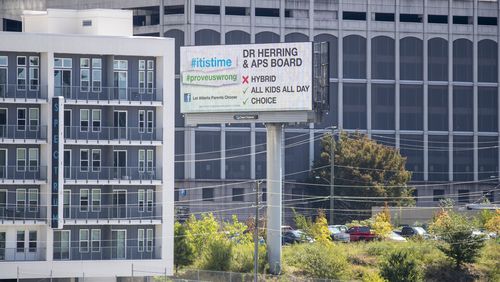 Online learning has been especially hard for the district’s youngest and most vulnerable students, she said.

“We are losing them,” Herring said. “We have a responsibility to start to do as much as we can, as safely as possible to not completely lose them before the close of this semester.”

Several critics faulted the district for surveying employees about their ability to return and then changing the plan. They called for APS to reissue those questionnaires. Skye Duckett, the district’s chief human resources officers, said employees can request telework or other accommodations, such as emergency paid leave.

“This is a relationship with parents and teachers that’s going to continue beyond the pandemic, and there was an opportunity here that was lost,” he told the board. “Communications over the last couple weeks have been confusing, and as a result I think we’ve seen a loss of trust.”

Board member Cynthia Briscoe Brown said this should be a time when everyone works together.

“What could have been an opportunity here for us to listen and learn from each other has devolved into people taking sides: North vs. south, poor vs. rich, technologically literate vs. not connected, black vs. white, right vs. left, can’t-afford-a-doctor vs. good health insurance and— all of them —us versus them. But there’s only one side and that’s the side of our children and our employees,” she said.

The district aims to give students in sixth through 12th grades the option to resume in-person learning in November. Parents of all students must decide by Monday which model they want.