A Cobb County drama teacher won the first round in his bid to keep his job more than a year after he took a student to his home, leading the school district to not renew his teaching contract.

A three-person tribunal that adjudicates personnel matters for the school district on Tuesday recommended that Campbell High School teacher Spencer Jordan instead be suspended for five days for violating the system’s policy that prohibits removing a student from school grounds without written permission unless it’s an emergency.

The panel’s recommendation will be considered by the Cobb County School Board at its Oct. 15 meeting.

A drama teacher for 12 years who is openly gay, Jordan allowed a student to stay in his home when in September 2019 he took one of his students to his Forsyth County home. Attorneys for the school district said the visit violated school district rules that only allow students to be alone with teachers for academic purposes and with the permission of a parent or guardian.

The school district originally opted not to renew Jordan’s contract, and Jordan appealed the decision.

Jordan was the student’s drama teacher during the 2019-2020 school year. The student told Jordan that he was having problems at home and feared he would be kicked out of his home because he was bisexual.

On Sept. 9, 2019, the student left the school with Jordan, who took him to his home where the student took a shower, ate a steak dinner and watched a movie with the teacher’s family.

Jordan said during testimony Tuesday that before he brought the student home, he spoke with a school counselor to make sure he was not violating any district policies. The counselor told him she had contacted the student’s mother and that Jordan would be fine, saying “many teachers have done it in the past,” he said.

Testifying before the tribunal, the student’s mother said she did not give permission for her son to go to the teacher’s home. She also refuted allegations that she would have kicked her son out of her home for being bisexual.

“Why should I kick out my son out of the house?” she asked. “It was no reason.”

Robin Webb, Jordan’s attorney, said Jordan has a “squeaky clean record” during his 21-year tenure at Campbell. Jordan, she said, was being punished by the district because of his caring nature and that he’s gay.

“That’s why this teacher with an impeccable record has had his career and reputation absolutely ruined,” she said.

Attorneys for the school district also argued that Jordan violated the system’s policy by discussing the student’s sexuality with him.

“This case is not about Mr. Jordan’s sexuality,” said Jordan Bailey, who works with the law firm Gregory, Doyle, Calhoun & Rogers LLC representing the district. “This case is about a teacher violating district policy by taking a student to his own home without permission.”

Jordan under cross examination said he never discussed the student’s sexuality with him. The only time it was brought up was when the student talked about it with him. When the student said he would be kicked out of his home, Jordan said he first spoke with the school counselor about where the student could stay if he became homeless.

“He was afraid, and I wanted to help,” Jordan said.

Jordan was placed on administrative leave Sept. 10, 2019, and later found out his name and email had been removed from Campbell’s website. 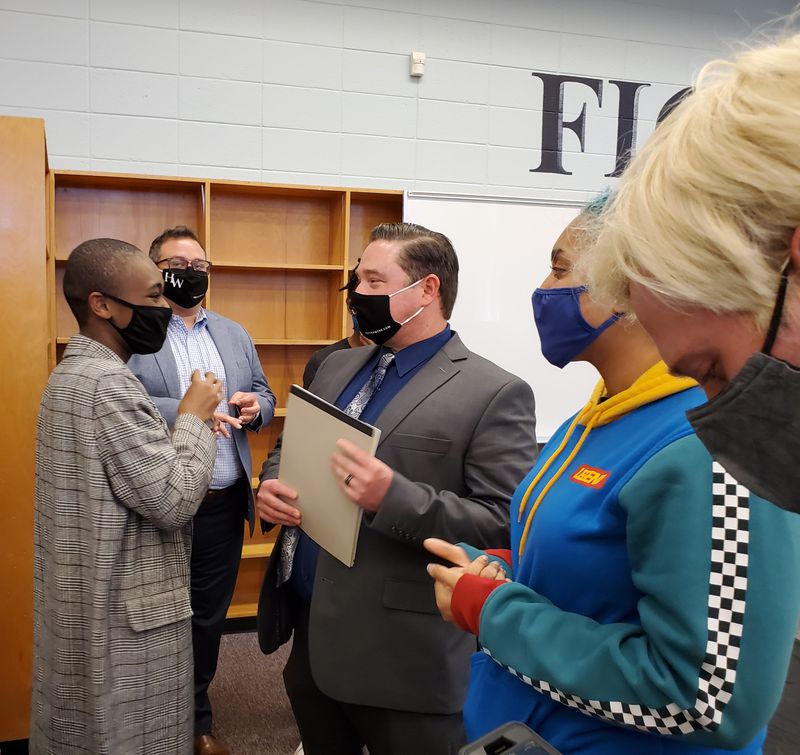 About a half-dozen former Campbell students and parents spoke in defense of Jordan and pleaded with the panel to reinstate his contract. One parent said her daughter was depressed and suicidal before she began taking theater classes at Campbell. Her daughter came out of her shell and after she graduated, she would drive three hours from her college in south Georgia just to visit Jordan.

Former student Jahmina Santiago said Jordan was a father figure to her and that he “singlehandedly” changed her life. “He gave me a place to feel safe and to feel respected, seen and heard,” she said.

Matthew Wright, a former student who graduated in 2014, said Jordan was always kind and helpful to him and his classmates. “I think that Mr. Jordan is a once-in-a life-time educator, and it would be a great shame to lose that,” he said.

Connie Jackson, president of the Cobb County Association of Educators, said Jordan did what he did out of concern for his student.

“I feel like he should be back in the classroom doing what he loves with students who love him,” she said.