Every intersection with music that I’ve had in my life can be traced to a cool night in January 1984.

The Hollywood Sportatorium outside of Fort Lauderdale, Florida, was exactly the kind of dirt hole you would expect from something named a “sportatorium,” but on that night, it was a magical palace, the place where I would be indoctrinated by the spirit of live rock ‘n’ roll.

I was a pre-teen with an insanely overprotective Italian mother, so the fact that I was even allowed to glance at a concert venue was an act of God. But my older sister and her then-boyfriend (who would become her husband, teach me to play the drums and school me in the fabulosity of Styx and KISS) had an extra ticket to Van Halen’s “1984” tour stop. I begged my parents, they acquiesced given the chaperone scenario and there I was, sneakers sticking to the grubby floor and newly purchased jersey-style tour T-shirt (I think it cost 10 bucks) tied around my waist.

At this point in my career, I’ve experienced the lights going down, the whoosh of a crowd roar and a darkened stage awakening in a blast of sound a couple of thousand times. It’s still the element of concert-going I most enjoy. But on that night, when the album track “On Fire” segued into Alex Van Halen’s locomotive double bass drum on “Hot for Teacher,” I was awestruck.

I was an MTV kid, and while I relished Van Halen’s live videos for “Unchained” and “So This is Love” (“Mean Streets” is still my favorite album of any incarnation of the band), the act of bouncing around our family room carpet playing air guitar was especially pointless compared to doing it in front of a cheap plastic seat in a “sportatorium.”

I still remember Eddie’s young, goofy grin as he launched into his patented leap, that guitar pinned to his torso. Of course, it was always difficult for anyone in Van Halen to inch into the spotlight when David Lee Roth was at the helm. But behind Roth’s spirited yelps and kung fu kicks, Eddie was always lurking, whether tossing out the gorgeous riffs of “Little Guitars,” playing the synthesizer (a novelty for a rock band at the time) during “I’ll Wait” and their biggest (and most toothless) hit, “Jump,” or steaming up the stage with Van Halen’s awesomely filthy – in a musical sense – cover of The Kinks’ “You Really Got Me.”

I screamed myself hoarse that night and went home realizing that, even as a kid, I had just witnessed greatness in its prime. How many times did I gape at the stage, watching Eddie hammer out notes, but still thinking, “How did he do that?” How often did I hear something emanating from the stage, yet still have no idea how those sounds could come from that one guitar?

Eddie Van Halen was more than a jukebox hero. He was a visionary, period. It’s easy to look back at Van Halen’s 1978 debut and the instrumental that sent so many music fans’ heads spinning – “Eruption” – and think, “Yeah, so? I’ve heard faster and better.”

Maybe now you have. Because of Eddie Van Halen.

But his playing wasn’t only about speed – a tactic employed by many rock guitarists intent on showing off their prowess.

Just listen to the sweetness underneath the crunchy licks that open “Beautiful Girls” or the effects (again, a novelty at the time) coupled with his dexterity on “Cathedral” or the way the intro to “Little Guitars” unfurls into open chords shimmering in melody. 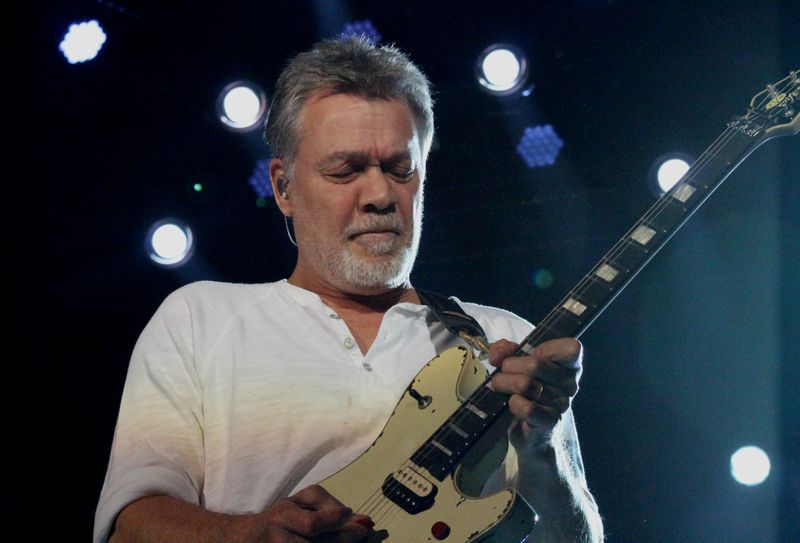 Eddie Van Halen tricked rock fans into listening to pop constructs because of his craftiness and athleticism as a guitarist.

He was a pioneer. A trendsetter. A guy who inspired thousands and thousands of kids to not only pick up a guitar and play, but to fall in love with rock ‘n’ roll.

I’ve often flashed back to that night in 1984 at the (thankfully long-razed) “sportatorium” while corralled in arenas or stadiums stuffed with teens shrieking about sharing the same air as their idols – whether Justin Timberlake, Katy Perry or Harry Styles – but also shaking with anticipatory glee at their first concert experience.

I don’t judge anyone’s inaugural anything, but I’ve always been secretly thankful that my initial concert outing was with a band that is embedded in rock history, with a guy so clearly in love with his craft.

Happy trails, Eddie. Your history will live on.