Armed guards are seen on the premises of the Efficiency Lodge on Flat Shoals Road on Wednesday, October 7, 2020, in Panthersville. (Elijah Nouvelage for The Atlanta Journal-Constitution)

By Zachary Hansen – The Atlanta Journal-Constitution

More residents at DeKalb motel told to move out.

An extended stay motel company is facing a lawsuit after it forced several long-time residents to move out last month.

On Wednesday, as activists and former residents protested outside the Efficiency Lodge in south DeKalb County, another wave of renters who are behind on their payments were told to leave, despite the pending legal action that argues the evictions are unlawful.

Much of the outcry at the rally directly targeted former Georgia Gov. Roy Barnes, and his brother Ray Barnes, who were once co-owners of Efficiency Lodge, Inc., an extended stay motel chain with 15 locations in Georgia and Florida. According to the Georgia Secretary of State’s business registration database, Ray Barnes remains the head of the company, which is now the subject of a lawsuit filed by the Atlanta Legal Aid Society on behalf of three current and former renters.

“We think it’s really messed up that a millionaire continues to take people’s rent and kick them out and force them to live in terrible conditions,” said Natalie McLaughlin with the Housing Justice League, echoing complaints about maintenance and management at the motel.

During the pandemic, social agencies said more longtime hotel residents who are out of work are facing threats that they will be kicked out. Though it is not explicitly spelled out in the law, some lawyers say hotels cannot and should not remove residents from their rooms without going through the formal court eviction process. Because the residents lived there for several months, the new lawsuit argues, they should be given the same rights as tenants in apartments or houses.

The suit could test that interpretation of the law if a judge rules on the case, potentially increasing protections for extended stay motel residents, who typically make low incomes and may be living on the brink of homelessness.

Eleven families were forced out in early September, local activists said, and about 10 more were told to leave by Wednesday. Armed security guards were at the motel in Panthersville to ensure the most recent evictions were carried out even while Wednesday’s protests were underway. 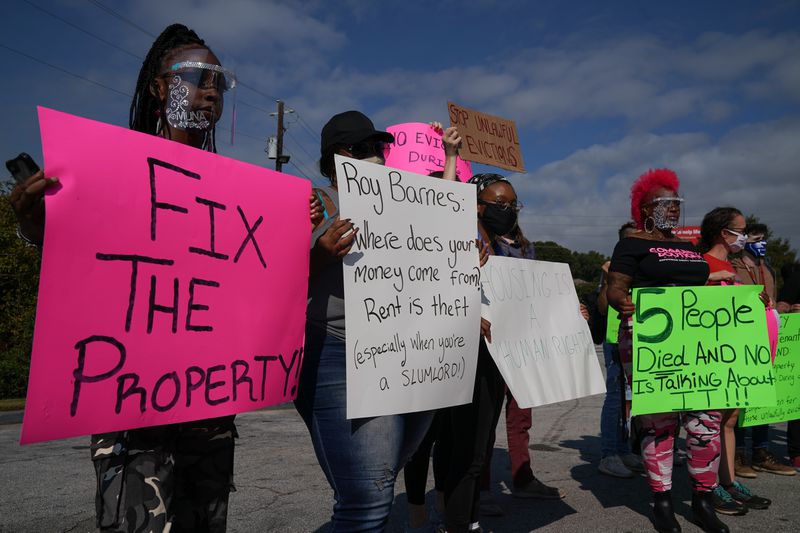 With her three daughters in tow, Valencia Gasper, 31, was among the latest to be evicted. She packed up her room and went to a friend’s house after being told to leave Wednesday.

“You just get up and get all of your stuff in bags,” said Gasper, who said she had fallen behind on rent. “But as long as my kids have a safe space, I can tough it out. I can cope with it.”

According to state business records, Ray Barnes is the CEO and chief financial officer of Efficiency Lodge. While Roy Barnes, the former governor, was once a co-owner of the motel chain, according to news archives, his current involvement is unclear. A Democrat, Barnes served as governor from 1999 to 2003 and now works as an attorney in Marietta.

When asked about the recent lawsuit, a representative for the company referred a reporter to the Barnes Law Group for comment. Neither Barnes or his law firm responded to multiple calls and emails requesting comment Tuesday and Wednesday.

The former governor also serves on the board of Cobb-based charity MUST Ministries, which recently celebrated the groundbreaking of a new $12.1 million shelter and health clinic. At the event on Sept. 23, Barnes said helping the homeless is in his DNA.

“We have an obligation as a community for those that have fallen on bad times to take care of them,” he said.

The lawsuit against Efficiency Lodge was filed by two current residents and a former resident who said she was “locked out” of her room in July without a formal eviction being filed. She said she had been continuously living at the hotel for almost a year, but fell behind on rent in the spring and over the summer. She had been trying to make payments to catch up on rent, the lawsuit states. 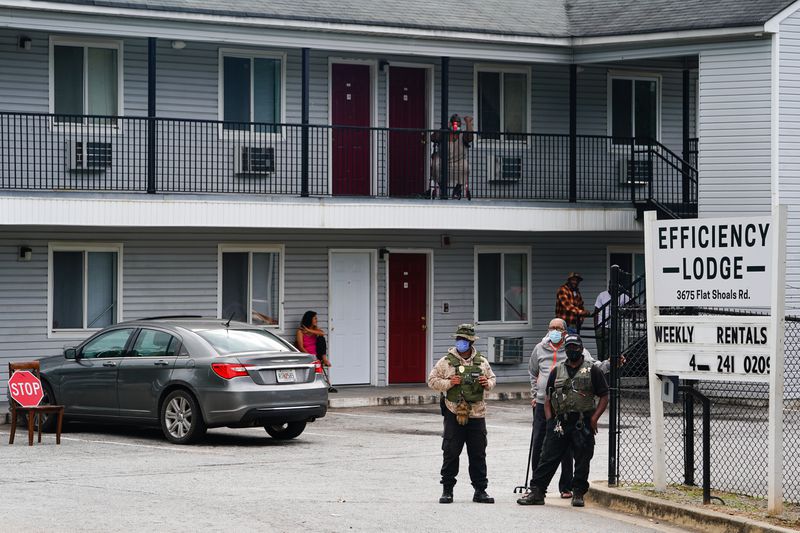 The two current renters who are part of the lawsuit said they have repeatedly been threatened with eviction after falling behind on their rent when the pandemic hit.

In early August, the federal government issued a moratorium on evictions for low-income renters who meet certain criteria. However, that order states it does not apply to people in hotels or motels.

Several of the longtime residents who had to move out in September attended the protest Wednesday morning. Travis Smith, who lived at the Efficiency Lodge for more than a year, said he was employed as a maintenance worker at the property, but he and his family were kicked out after he missed rent.

“They came to my room like I was a fugitive,” he said. “We’re not standing for it.”