By Ariel Hart – The Atlanta Journal-Constitution

Some teenagers who play hockey for the North Carolina Junior Hurricanes tested positive for COVID-19 in late September. Those who tested negative got on a bus to Georgia for weekend play in Marietta.

Within days it was clear that that was a mistake. Coronavirus outbreaks now rage among players in both states, as the games apparently turned into a super-spreader event.

The Georgia club now has infections among 23 players and one parent, according to team officials and associates. The North Carolina club would not disclose a number. Reports to media outlets have varied from just three there, reported by the league, to unofficial reports of up to 17.

The incident has become a cautionary tale about the fervor to conduct sports amid inadequate guidance. And it stands as a lesson on the widespread misunderstanding in the general public about what it means to get a coronavirus test result.

The team assumed that players who tested negative were safe to play. But the tests come with high false negative rates, experts note.

“Just because you tested negative doesn’t mean you’re not infected,” said Dr. Carlos del Rio, distinguished professor of infectious diseases at Emory University. “That game should have been canceled.”

While no one can know for sure what caused the spread here, he describes the hockey chain of events as “a mistake all along.”

Club officials said they adhered to protocols as best they could with what they know. But they are laymen, said Lisa Durrett, director of marketing for the Georgia team, the Atlanta MadHatters, and what they know changes.

Love of the game

All across Georgia and the nation, one of the most contested dilemmas of the pandemic has concerned whether to play sports. Leagues don’t always have public health experts.

Some leagues have twisted themselves into contradictions, as when the University of Georgia stated that it would play football, but without tailgating—but with “gathering in parking lots” (which ended up looking a lot like tailgating).

Others have cut the cord and decided not to play. One of those is Canada’s biggest youth hockey association, the Greater Toronto Hockey League, which has just postponed its start until at least January.

The U.S. Premier Hockey League, which oversees the highly competitive youth hockey teams in Atlanta and Raleigh, decided to play, saying it would follow CDC guidelines to keep players safe.

Because CDC considers competition by youth teams from different geographic areas the highest risk, the league requires players and staff to be tested before overnight trips, people associated with the teams said. So the North Carolina team was tested, but the Atlanta team was not.

The positive results turned up by the Friday before the weekend game.

CDC guidelines also say that when infections arise, youth sports organizations should immediately notify local health officials, league staff, game officials and families. Junior Hurricanes CEO Jocelyn Langlois said he contacted the league and the Atlanta team and its owners about the positive tests and all agreed to go ahead with the game.

“Atlanta was aware,” he said.

The Atlanta team, though, says it received no official notification of the full extent of the results but found out only through a haphazard series of texts and phone calls which didn’t drive home the seriousness of the spread.

“The Atlanta MadHatters organization is frustrated with the poor communication by the Carolina team regarding the testing of their players ahead of the games last weekend,” the club said in a written update.

The league also requires that teams adhere to any state or local rules on the pandemic. Enforcing those was the issue at the Atlanta Ice House, which is host to the MadHatters and where the games were played.

The Ice House has signs posted requiring masks, and everyone entering was temperature-checked, Durrett said. The attendance was kept low to allow for distancing, she added. But as guests bought tickets and came in, Ice House couldn’t police everyone.

League representatives did not return messages from the AJC about the outbreaks.

“I think as a parent this is about as scary a situation as we could have imagined,” said one parent, who did not want to be named because of potential repercussions. The teenage players, the parent said, are so passionate about playing, it’s easy for them to become clouded.

“It makes the role of the leadership even more important,” the parent said. “Everybody wants to try and make it work. But maybe it can’t work without scrutiny of public officials and people who actually know what they’re doing.” 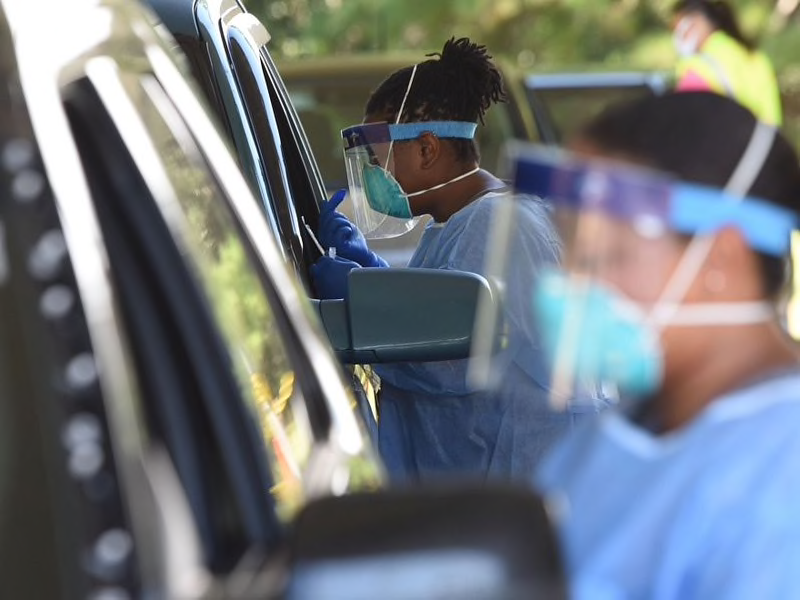 A key blunder in the hockey saga, experts say, was thinking the tests are individually accurate and would protect the teams.

In fact, tests for COVID-19 are least useful when rapid tests, known as antigen tests, give negative results. That doesn’t mean an individual is virus-free. It just means the test tried and failed to find the virus. Antigen tests aren’t very sensitive.

There could be a lot of reasons for a negative result on a rapid test. Maybe the tester was clumsy. Or maybe the patient was infected but had a low viral load. Or, maybe the person actually wasn’t infected.

The false negative rate of antigen rapid tests has been clocked anywhere from single digits to being wrong up to 50% of the time.

However, rapid tests are excellent at being right when they declare a positive result, so there were certainly infections on the NorthCarolina team.

What the Junior Hurricanes test results may mean, according to CDC guidelines, is that the entire team needed to quarantine.

Guidelines for youth sports published on the CDC website say people should quarantine if they have spent more than 15 minutes less than 6 feet away from someone with COVID-19.

The Cobb and Douglas Public Health Department told the AJC it is investigating the outbreak here and will assign contact tracers.

The MadHatters have postponed the next two games and canceled all practices, and are re-cleaning the facility and aggressively testing.

“It’s fair to say we’ve learned from this and changes will be made,” said Langlois, the team CEO. That doesn’t mean they’ll stop playing.

“Everyone wants to keep our families safe,” he said, “and everyone wants a season so everyone can keep playing the game they love.”