Just when social media was being dominated by rather dull back-and-forths over Wednesday’s vice presidential debate’s more substantive issues, along came The Fly that landed on Mike Pence’s head.

That’s all it took for a vice presidential debate unlike any other in American political history to explode on social media.

Vice President Pence and Calif. Sen. Kamala Harris, who is Democrat Joe Biden’s running mate, debated at the University of Utah, and separated by plexiglass panels and just over 12 feet of space as coronavirus-related precautions.

But despite the distance, even Harris seemed to mouth the words, “Is that a fly?” when the insect made its opportune (or inopportune, depending on who you’re supporting this year) landing on national TV. 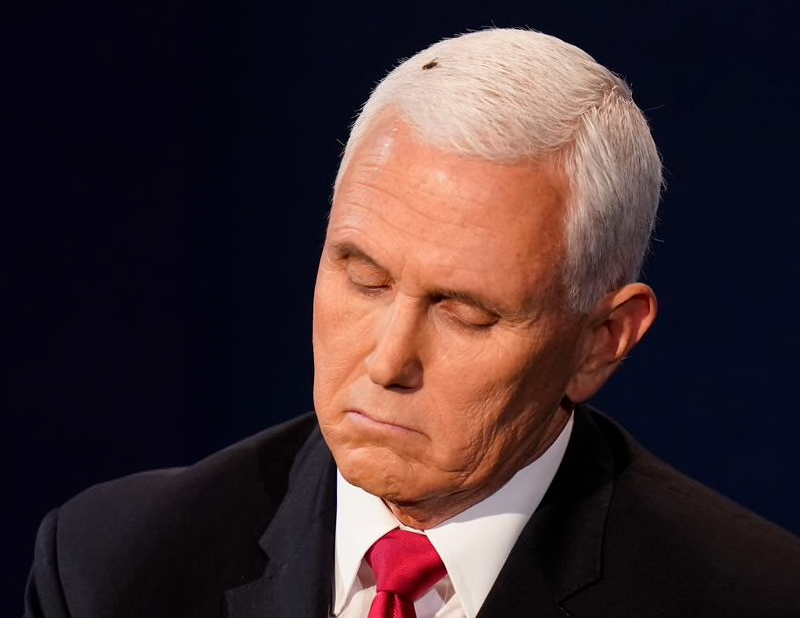 Pence didn’t flinch during the embarrassing encounter which, according to The New York Times, stayed on Pence’s head for 2 minutes and 3 seconds.

Biden’s campaign quickly picked up on the fly as a fundraising tool.

According to a CNN poll, the fly came in ahead of Pence, in terms of a debate winner.

Other than the fly, here are some other takeaways from Wednesday night:

Harris put Pence on the defensive, calling Trump’s pandemic response “the greatest failure of any presidential administration in the history of our country.” Trump and Pence “still don’t have a plan,” she said.

Pence shot back that much of Biden’s proposed coronavirus response is action the federal government already is taking. Pence expressed sympathy for all those affected by the pandemic, and he accused Harris of “playing politics with people’s lives.” Harris has accused Trump of politicizing the vaccine development process.

Harris, the first Black woman on a presidential ticket, spoke about “people around our country of every race, of every age, of every gender” who “marched, shoulder to shoulder, arm and arm, fighting for us to finally achieve that ideal of equal justice under law.”

Still, she said, “We are never going to condone violence.”

Pence, in contrast, proclaimed his trust for the justice system and put the focus on incidents of violence, saying there was “no excuse for the rioting and looting.” And he argued that the idea that “America’s systemically racist” and that law enforcement has an implicit bias against minorities “is a great insult to the men and women” who serve in law enforcement.

Pence’s most aggressive line of attack on Harris was pressing her for an answer on whether a Biden administration would “pack” the Supreme Court by adding liberal justices if they win the election. Harris didn’t take the bait, just as Biden hasn’t.

Pence hailed Trump nominee Amy Coney Barrett, who would succeed the late liberal Justice Ruth Bader Ginsburg if she’s confirmed, as expected, before the election. At least twice, he spoke directly to voters warning that Biden and Democrats would expand the court if they “don’t get their way” on blocking Barrett.

The senator did manage to turn Pence’s “pack the court” attack around by noting that Trump’s slate of federal court appointees has been overwhelmingly white.