When fending off claims that he is not doing enough to discourage violent far-right groups, President Donald Trump has suggested the real problems have come from the left, and specifically, “antifa.” But defining antifa and measuring the threat it poses is challenging.

Last month, in a hearing before the House Homeland Security Committee, FBI Director Christopher Wray said the agency had opened investigations into “violent anarchist extremists, any number of whom self-identify with the antifa movement.” But he defined antifa as an “ideology.”

“It’s not a group or an organization,” he said.

The exchange prompted an angry Twitter response from Wray’s boss.

“I look at them as a bunch of well funded ANARCHISTS & THUGS who are protected because the Comey/Mueller inspired FBI is simply unable, or unwilling, to find their funding source, and allows them to get away with ‘murder,’” Trump tweeted.

On Thursday, the president again invoked antifa while criticizing Michigan Gov. Gretchen Whitmer, who had blamed Trump’s rhetoric for inspiring an alleged militia plot against her.

The topic came up again in the first presidential debate when former Vice President Joe Biden called antifa “an idea,” a definition that was ridiculed by conservative commentators. Biden cited Wray in describing antifa as a movement, and that description fits, a member of Atlanta Antifascists told The Atlanta Journal-Constitution.

Yet, the Atlanta Antifascists member, who spoke with the AJC anonymously, citing threats from far-right groups, described himself as member of an organization.

“We, personally, are an organized group, but the majority of antifascists are not,” he said.

Atlanta Antifascists is one of the better organized antifa groups in the nation, but its activities are primarily online where its members spend weeks sifting through digital clues to expose alleged members of far-right groups to their communities. They have also supported counter-protests to rallies by white supremacists, neo-Confederates and neo-Nazis around the state.

But elsewhere, particularly in western hotspots like Berkeley, Calif., and Portland, Ore., self-identified antifascists have battled far-right groups in the streets and conflicted with police. Last year, Dutch-born antifa activist Willem van Spronsen was killed by police in an attempt to bomb a federal immigration detention facility with a propane tank.

A threat assessment released this week by the Department of Homeland Security warned that violent anarchists were exploiting otherwise lawful social justice protests. 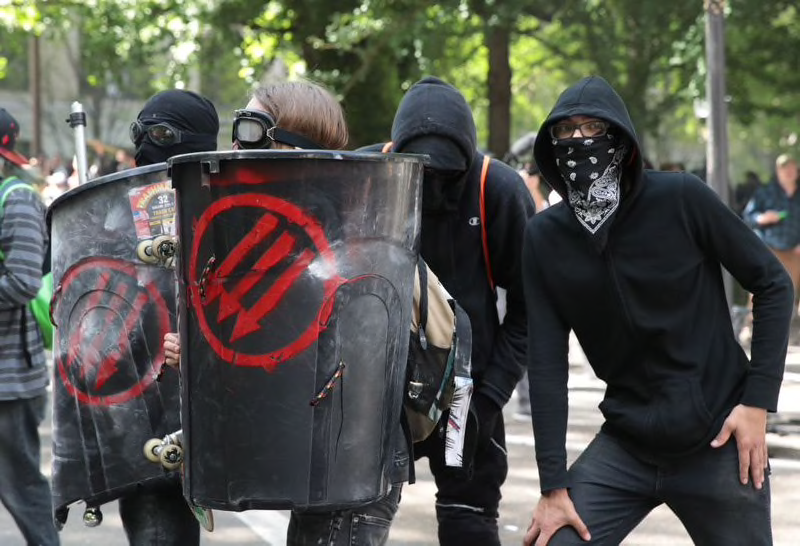 Typically, antifa groups in Georgia have been less violent. Atlanta Antifascists has used social media to expose jailers and National Guard members with ties to white supremacist groups, and regularly releases exhaustive dossiers on racial and political extremists attempting to disguise their beliefs. But black-clad anarchist and communist counter-demonstrators have participated in street demonstrations this year in Atlanta. They also showed up to a rally in Stone Mountain in August armed with assault rifles and grappled with members of far-right militias and their supporters.

The Atlanta Antifascist member who spoke to the AJC dismissed any violence on the part of counter-protesters as “heat of the moment” decisions. But he said his group supports a “diversity of tactics.”

“I don’t believe in shaming people for how they counter the far right,” he said.

He said members of Atlanta Antifascists range from progressive Democrats to anarchists and communists who agree to work together on “points of unity.”

“The objectives are to be push out fascism and fascists from the American politics,” he said. “Fascism has risen, and we have risen in response to it.”

Heather Williams, a senior policy researcher at the RAND Corporation, described antifa as “a particularly loose movement,” when compared to far-right entities like the militias.

“Antifa and its antecedents have been around for a while,” she said.

Williams, who spent a dozen years as an intelligence analyst for the federal government, said predecessor movements in the United States date back to anti-racist groups in the 1980s, but earlier in Europe where activists mobilized to counter the rise of neo-fascist groups in the 1960s.

Like those movements, the modern antifa is a countermovement aimed at far-right groups.

“If the core movement (fascism) doesn’t exist, then the countermovement fades away. That was seen in Europe, historically,” she said.

That’s one reason why Williams believes the political rhetoric around antifa is problematic.

Trump and others have lumped the vast majority of peaceful protesters in cities across the nation with a small number of far-left anarchists, she said. That could have the unintended consequence of drawing antifa more into the mainstream, she said.

“I certainly worry that all of this national attention, a lot of which has been artificially generated by the president and those around him, have the potential to inflate antifa,” she said.

In a bulletin sent to local police in August, the FBI warned that anti-government extremists “across the ideological spectrum” are plotting “against government and election-related targets.” The bulletin, first reported by Yahoo! News, further warned that incidents by extremists “likely will increase as the election approaches.”

Williams called the danger posed by antifa “overblown” and sided with federal law enforcement assessments that emphasize the greater danger posed by far-right groups, which she said have a longer, more-established history of violence against people.

“If we are going to be rational about where danger comes from, there is more danger from far-right extremism,” she said.

Such far-right groups tend to be more organized with explicit violent goals, like sparking a civil war to create a white ethnostate.

“There are differences in scale, organization and the propensity of violence,” she said.

That said, the political threat posed by anarchists is not negligible.

“If we think about anarchists — these individuals are anti-American. They are anti the (American) system of government and values,” she said.