Samanthia Jordan-Hill had gotten home from work early and turned on the news when she saw a segment about a teenage boy in foster care who was looking for a family.

There was something about seeing the 16-year-old’s story through the state’s “Wednesday’s Child” program in 2016 that struck her spirit, the Newnan woman and empty-nester said.

Wednesday’s Child is a partnership between the Georgia Division of Children and Family Services and local media to highlight children in foster care and encourage adoption. Adoptions from foster care have increased in Georgia in recent years.

“Christian said he loved animals. He said he loved to read,” Jordan-Hill said. “(The segment) also said he needed help dealing with anger from being separated from his brother. He ended up back in foster care because the (adoptive) parents were having some problems.”

After seeing the segment on the news, Jordan-Hill immediately contacted DFCS to learn more about the teen — before she even discussed it with her husband — and after about two years of working their way through the system, Christian Jordan became part of the family. 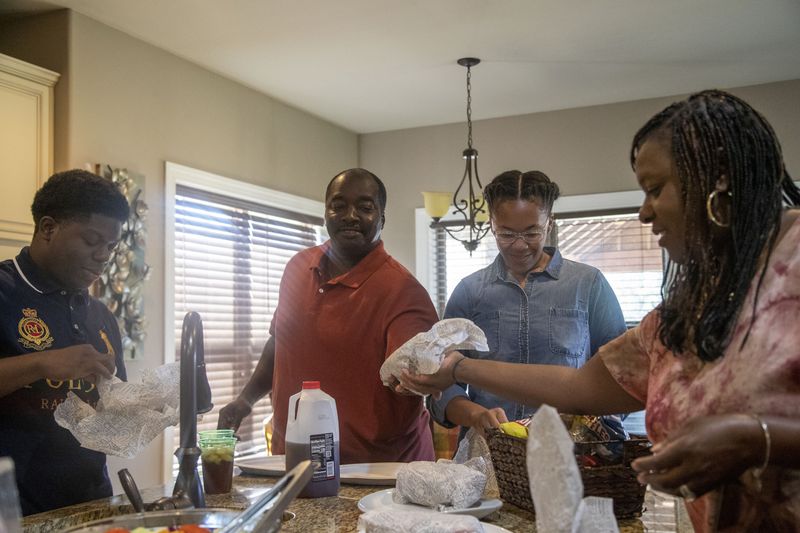 The Jordan-Hill family is one of thousands who have adopted Georgia children from foster care, a trend that has surged in recent years, leading DFCS officials to request more than $5 million in next year’s budget to help with the increased caseload. That money will pay for the financial assistance families receive monthly from the state after adopting a child, said Chris Hemphling, the division’s deputy director and general counsel.

The number of adoptions through DFCS has nearly doubled in five years, from 799 in 2019 to 1,518 in 2019, according to agency statistics. And while the number of children in foster care has also grown, the rate at which they are being adopted has increased as well.

In 2014, there were more than 15,000 children who were in the state’s foster care system at some point during the year. A little more than 5% of children in custody were adopted that year.

Adoptions from foster care hit a lull in March, when the state and nation began to grapple with the coronavirus pandemic, but they picked up as the state opened more of its services. As of August, there were about 12,000 children in the state’s foster care system. As of this week, nearly 1,000 adoptions had been finalized this year.

Various factors could have led to the increased number of adoptions over the past few years, including legislationoverhauling the system that went into effect in September 2018.

Among other things, the 2018 legislation reduced the amount of time a birth mother could change her mind when placing a child for adoption from 10 days to four. It also decreased the age someone can adopt a younger family member — if their parents die, for example — from 25 to 21.

State Rep. Bert Reeves, the Marietta Republican who sponsored the legislation, said adoptions in Georgia have been on an “upward trajectory.”

“There’s been a lot of energy placed in this concept of foster children and a lot of awareness that’s been brought to our community about the need to adopt foster kids,” Reeves said.

Nearly half of children who enter foster care are “discharged” — whether to a birth parent, family member or adoptive parent — within a year of entering the system. That period extends to about two years when adoption is the only option, Hemphling said.

That was about the length of time it took for the Jordan-Hill family to finalize Christian’s adoption. 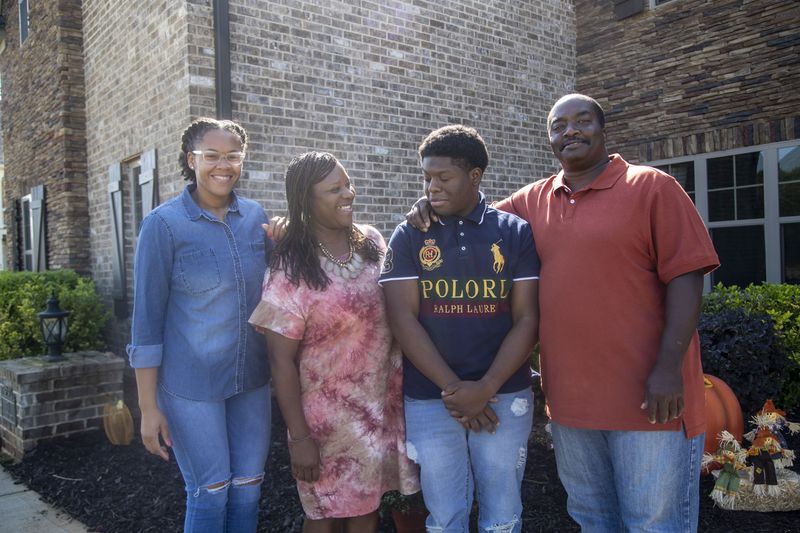 “At first we had discussed just fostering a child,” Jordan-Hill said, adding that their three daughters — now in their late 20s and 30s — were all out of the home. “But I said this will give us someone else to help. Plus, my husband had always been in a house full of girls, and I knew he would like to have another boy in the house.”

Norman Hill, Jordan-Hill’s husband, said it took him a few months to warm to the idea of bringing another child into their home, but he connected with Jordan, now 20.

“I figured, the Lord blessed me,” Hill said. “And now I can bless somebody. To give somebody the opportunities I can provide.”

For him, it was important he be adopted before his 18th birthday, when children in foster care age out of the system.

“I just wanted a family that was nice and paid attention to me,” Christian said.

After spending weekends with the Jordan-Hill family for about seven months — while living in a group home for children in foster care — Christian’s adoption was finalized five days before he turned 18 in July 2018.

When he moved in with the Jordan-Hill family, Christian should have been a rising senior in high school but he only had 15 of the 28 credits necessary to graduate. After working with teachers and counselors at Northgate High School, he graduated this past May. He’s now working in a warehouse and studying to become a welder in technical college.

“I’m really proud of who he’s becoming,” Jordan-Hill said. “Because a lot of people would not have expected him to end up in a place where he was able to accomplish as much as he has.” 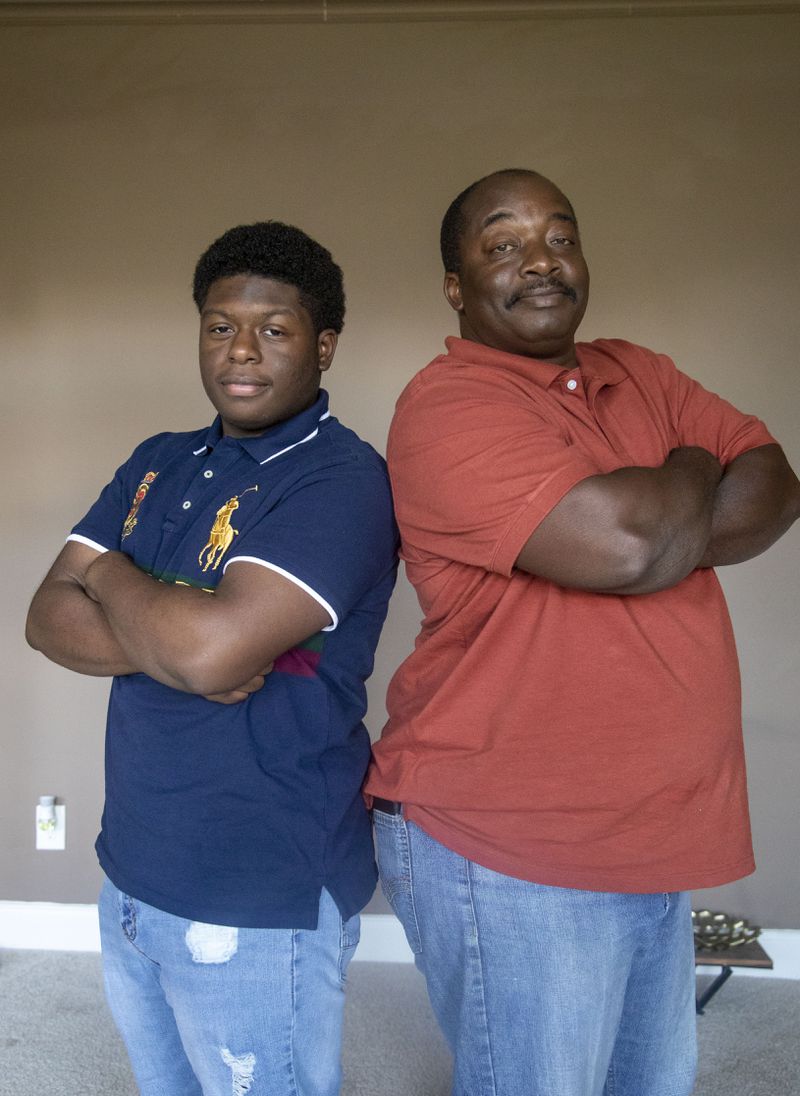 Teens and siblings are the hardest to find permanent homes for, and the longer children are in foster care, the harder it is for them to get adopted, DFCS officials said. Statistics show that children who spend a lot of time in foster care often have not learned life skills needed to live independently.

Reeves said there is more the state can do to ease the burden on foster and adoptive parents. For example, this year he successfully pushed a bill that allows foster parents to extend the amount of time a child in their care can be left with a babysitter from two to three days without having to get approval through DFCS. Reeves said simplifying the process for securing child care improves foster parents’ quality of life.

“But what we’ve got to do is we’ve got to continue to figure out is how to harness these families out there that feel a calling,” Reeves said. “And I think that that is what has been happening over the last few years.”

The Jordan-Hill family feels that calling, especially after having had such a successful adoption with Christian.

Recently, Hill saw another “Wednesday’s Child” on television and has begun the process to foster him. This time, the boy is a little bit younger — 13.

Hill is looking forward to welcoming another child to his family: “We’ve got more love to give,” he said.