Census deadline has also been extended to Oct. 31.

Ohioans have responded to this year’s census at a higher rate than 10 years ago, but organizers are still encouraging people to respond as the count continues through the end of this month.

Ohio has a 70.5% self-response rate this year, slightly higher than the 69% received in 2010, according to the latest census data.

Ohio has counted 99.8% of known households, which is about 30% more than in the last census. This includes both self-response and people who responded to a census taker at their door. In the last census, about 69% of Ohioans were counted. About 32.5% people nationwide have been counted by census takers and 66.6% of households have responded online, by phone or by mail.

Census results shape the future of communities, as the data informs how billions of dollars in federal funds are distributed for health clinics, school lunch programs, disaster recovery initiatives, and other critical programs and services for the next 10 years.

This higher count has happened despite challenges from the coronavirus and confusion over the 2020 census deadline.

The administration of President Donald Trump ruled Sept. 30 would be the last day to be counted. However, on Sept. 1 the National Urban League, several other organizations, states and cities, filed a lawsuit for more time for the count. The lawsuit says census officials said they can’t meet the Sept. 30 deadline.

The bureau’s director, Steven Dillingham, said in a statement in August that the census Bureau would hire more employees to accelerate the completion of data collection by the deadline of Dec. 31, 2020, which is required by law and directed by the U.S. Secretary of Commerce. The Census Bureau had previously planned on an April 2021 deadline because of delays caused by the coronavirus pandemic, but the Trump administration denied the extension.

Nikol Miller, the chair of the Dayton-Montgomery County Complete Count Committee, said the “moving-target deadlines” could impact the credibility of census takers with minority communities, which are typically undercounted.

“There are only so many times you can go to people who already have trust issues,” Miller said.

Dayton Mayor Nan Whaley said any time extended for the 2020 census is helpful.

“I know there’s some neighborhood leaders who knew their communities were behind so they’re taking extra action, so this time is helpful,” Whaley said. “We’re going to continue to do our best.”

With a response rate of 69%, Montgomery County so far has beat it’s 2010 response rate by one percentage point. Montgomery ranks No. 50 out of 88 counties, according to the most recent census data. 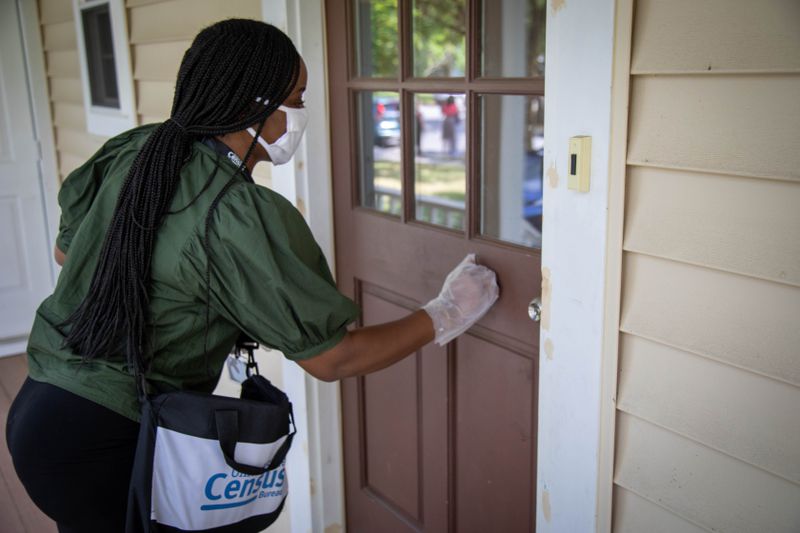 Miller said suburban communities are responding at a higher rate this year than in 2010, which could be a contributing factor in the higher response rates. People who live in densely populated urban areas have not responded at as high of rates as their suburban counterparts.

Licate said enabling people to fill out the census online in 12 different languages has made it more accessible to some.

The 2020 census has had some barriers because of the coronavirus pandemic.

In-person outreach was significantly delayed, starting in Ohio in August instead of April as originally planned. census takers will continue to visit households that have not yet responded until Oct. 31.

Licate said that census takers will not ask to come into homes and will be carrying bags clearly marked with the 2020 census logo.

Local communities, which typically would do census outreach in-person, were forced to do activities in other ways.

“We would have been at community events and farmers markets, but we weren’t able to do that this year,” Shoemaker said.

The U.S. government uses the census to determine how to allocate $675 billion per year in funding to state and local governments. census data will also determine the number of representatives states will send to the U.S. House of Representatives and sets the district boundaries for congressional, state legislative and other local elections. Ohio lost two congressional seats as a result of the 2010 census.

“Every person we count helps us in the ability to get federal funding, so it’s really, really important. It’s a big deal. We really need everyone to get to it,” Whaley said. “We’ve still got 26 days, so please while you’re heading to go vote early, make sure you’ve got your census in.”

Licate urged Ohioans to respond to the census now.