UPDATE [2 p.m.]: A tornado watch has been issued for much of metro Atlanta and parts of west Georgia until 8 p.m. as remnants of Tropical Storm Delta move through the state, the National Weather Service said Saturday.

ORIGINAL STORY: Have your umbrellas ready and try to stay dry this weekend because tropical rain from Tropical Storm Delta is speeding into our state, especially into North Georgia.

Those living in and around the metro Atlanta will likely get a break from the downpours ahead of that, according to the latest forecast.

“With the breaks we’ll have around, it’s not going to be a complete washout,” Deon said. “But you’ll still want to plan for most of your activities indoors. It’s going to be one of those yucky kind of days.”

A flash flood watch has been issued northeast Georgia through Sunday evening. Residents can expect between 2 and 4 inches of rain over the weekend, though the area could see more, Deon said.

Closer to metro Atlanta, residents can expect heavy rain, strong winds and even the chance for an isolated tornado late Saturday and into early Sunday morning, Deon said.

Saturday will see a high of 78 degrees, while Sunday is expected to top out at 75, according to the latest forecast. The rain is expected to come to an end on Monday, just in time for the start of the workweek. 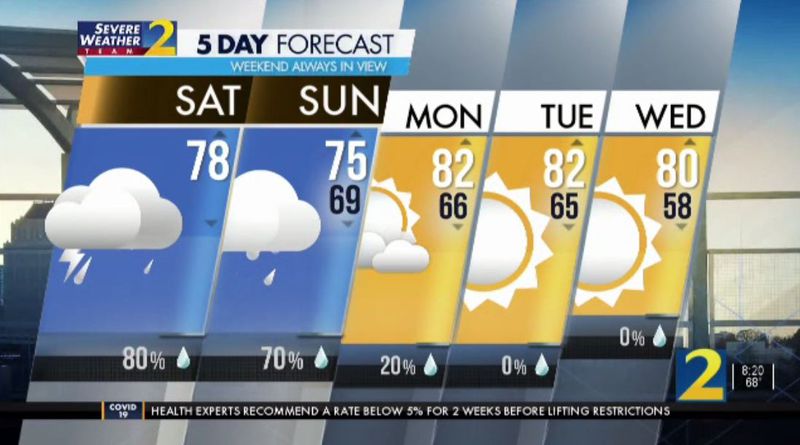 If weather permits, the Georgia Department of Transportation has a few roadwork projects planned over the weekend. Lanes will be closed overnight on I-285 at Ga. 400 for bridge, roadway and noise barrier construction, GDOT said. Two right lanes on Abernathy Road from Barfield Road to Peachtree Dunwoody Road will be shut down Saturday from 7 a.m. to 5 p.m., GDOT said.

In Atlanta, rolling closures on I-285 East near Riverside Drive could cause delays starting at noon Saturday, GDOT said. All lanes will be closed until 2 p.m.