Last month, some six days into his first stay at Kettering Hospital, Bill Chmielewski – the towering University of Dayton basketball great – thought he was going to die.

“I thought it was all over,” the 6-foot-10 former center said from his hospital room the other day. “I really felt that bad. I’d never been this sick in my life.”

He had been diagnosed with double pneumonia and COVID-19.

His daughter, Julie Willenbrink – an RN who is the nursing supervisor at Troy Hospital-Kettering Health Network, works in pulmonary rehab at the Upper Valley Medical Center and teaches nursing at Edison State – knew how serious the situation was.

She, like her sister, Shirley Carroll, had battled COVID themselves, though their cases, especially Shirley’s, weren’t as severe as was their 78-year-old dad’s.

When her dad was isolated in the COVID unit at Kettering, she, like her three sisters, could only talk to him by phone: “Several times I tried taking to him, but he was so short of breath. It was a very scary time…”

Her voice faded to a half-whisper: “I love my dad …and when I’d get off the phone, I’d cry.”

Shirley felt the same way: “It was a scary, scary time. It was horrible, just horrible.”

Their dad tried to give the situation some clarity the other day:

“Some people say it’s like the flu. I’ve had the flu – had it bad where I maybe lay in bed two or three days – but trust me, this is nothing like that”

And he knows the flu. He had a famous battle with it in 1962. It’s part of UD basketball lore.

The Flyers had caught fire coming down the stretch in the 1961-62 season and had won 10 in a row, including their first three games in the prestigious NIT Tournament. They’d beaten Wichita State, Houston and Loyola and were set to meet St. John’s for the championship at Madison Square Garden.

Prior to the game, the rest of the Flyers team went sightseeing, but Chmielewski was back in his room. overwhelmed by the flu.

“Everyone else saw the Statue of liberty, but I couldn’t get out of bed,” he once said.

Flyers coach Tom Blackburn, who had the bedside manner of Nurse Ratched, made sure he was on the court for the opening tip of the title game.

“Toward the end I was whipped and asked him to take me out but he wouldn’t,” Chmielewski had recalled.

The big man turned in a classic performance, scoring 24 points and grabbing 11 rebounds as the Flyers pushed aside St. John’s 73-67. It was the school’s first NIT title.

Chmielewski scored 107 points in the Flyers’ four NIT games and was named the MVP of the tournament. Flyers fans mobbed him on the court afterward and lifted him onto their shoulders. When the wire service photographers caught up to him, they wanted a picture of him with the loving cup trophy he’d gotten as the MVP. 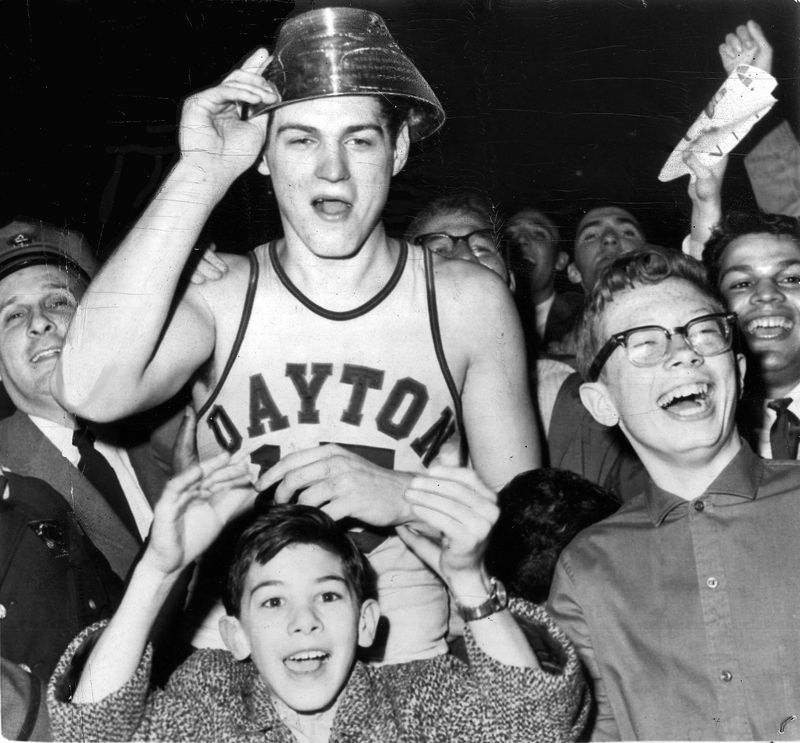 By accident, it ended up one of the most iconic photos in UD basketball history.

It shows the open-mouthed Chmielewski, surrounded by giddy followers, with the loving cup upside down on his head like it’s a helmet.

“It’s kind of funny how it happened,” he once told me. “The photographers all said they wanted to take a picture and I asked, ‘Whaddya want me to do with the cup?’

“They said to put it over my head and well, I put it over my head alright, but it wasn’t what they meant. Instead of holding it up like normal people do, I thought they wanted me to wear the thing! But you know what? Without even knowing it, I’d made a smart move. That picture played in papers all over the country.”

Over the years, that would be a recurring theme with Chmielewski. He was never one to follow the script.

But this past month many who know him worried that he wouldn’t be able to break free from the all-too-familiar story line of seriously ill COVID patents. As off Friday night, the virus had infected over 7.7 million people in the United States and killed over 214,000 Americans. On Friday, Ohio set a 24-hour record with 1,840 new COVID cases.

Chmielewski has had a tough go since late August. He had a heart stent put in on Aug. 31 and about a week later, having trouble breathing and feeling sicker by the day, he was taken to Kettering Hospital.

He would drop 30 pounds but that wasn’t his biggest loss in the past year or so. His wife Gail had died in August of 2019. And now COVID had hit two of daughters and likely also Shirley’s 19-year-old son – who got quite sick but wasn’t tested — and then the boy’s girlfriend, who did test positive.

Back in Michigan where Chmielewski had grown up, one of his best friends had had a severe battle with the virus, as had the guy’s wife.

And now he was isolated in the COVID unit at Kettering.

Chmielewski agreed it was a struggle, but said he was buoyed by one thing:

“When I was thinking this might be it, I finally realized I had to try to get a positive attitude because I have my daughters and my grandkids. I had to get through this.”

And so far that is what he’s doing.

After an initial 15-day stay in the hospital, he was sent home. But soon he was having trouble even walking around his house. He was fatigued and his oxygen levels dropped and after a few days he was brought back to Kettering,

He spent five more days in the hospital and was sent home again Friday.

Saturday, though still tiring easily, he said he was feeling pretty good which made you hope we might be witnessing another MVP performance.

Coming from Holy Redeemer High School in Detroit, Chmielewski was part of what many say is the greatest recruiting class in UD history.

It included future Naismith Memorial Basketball Hall of Famer Roger Brown, who came from New York City as did Jim Powers, while Gordy Hatton was from Waynesville and Chuck Izor came from Eaton.

That season the freshman team outshined the Flyers varsity. It drew sell-out crowds to the old Fairgrounds Coliseum for Sunday games and was a must-see spectacle when it opened for the varsity at the Fieldhouse.

With Chmielewski averaging 19.3 points and 14.5 rebounds a game, the team went 36-4-1 and advanced to the semifinals of the National Amateur Athletic Union (AAU) Tournament in Denver. 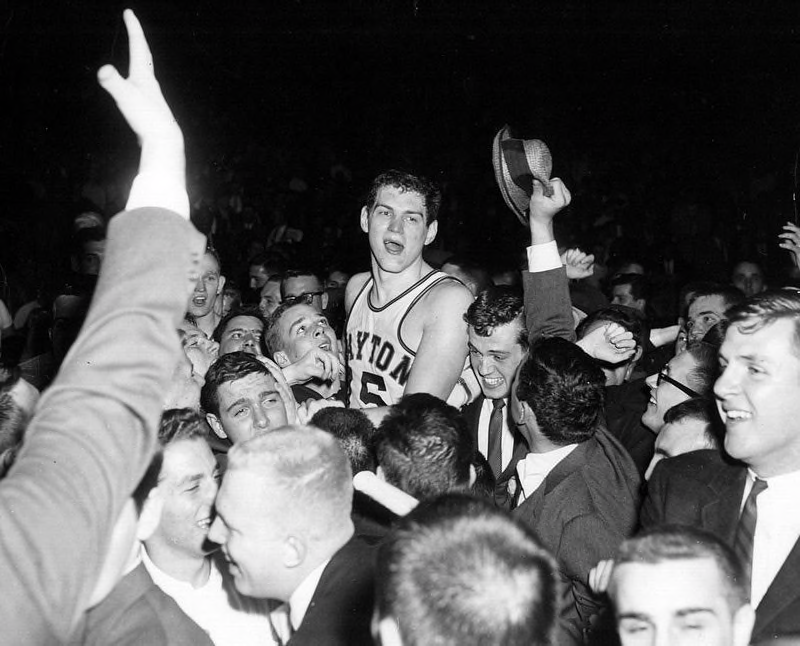 There were great expectations for the following season, but then Brown was unfairly cut loose by the university for his association as a teenager with former pro turned game fixer, Jack Molinas. Brown’s treatment rankled several of his teammates, especially Chmielewski.

As a sophomore Chmielewski averaged 15.4 points during the regular season and 26.8 in the NIT. The team was given a parade through town when it returned from New York and everyone couldn’t wait until next season.

But again Chmielewski flipped the script.

A consensus preseason All-America pick, he quit the team three weeks before the opener. He was married to wife Pat then and they had a child on the way. He had wanted some help from the school and especially from Blackburn and got none, so he promptly dropped out of classes, packed his car, drove back to Detroit to go to work.

His abrupt departure rocked the program and the city. It would have been like Obi Toppin suddenly leaving UD just before last season.

An NBA rule at the time prevented a player from being drafted until his class graduated so Chmielewski played for a pair of minor league pro teams, the Philadelphia Tapers and Trenton Colonials.

In 1964, the NBA’s Cincinnati Royals finally took him in the second round – the 15th overall pick – but he was the last player cut. The same thing happened the following year with the Detroit Pistons.

He returned to Dayton in 1977 and today he still runs the Miamisburg-based Chmielewski Electric.

He and Pat had four daughters: Shirley, Julie, Jamie and Sandy. After that 24-year marriage ended, he married Gail and their union lasted 33 years until her death last year.

Over the years he reconnected some with UD. “You get older and so much of that stuff goes by the wayside,” he told me several years ago. “You learn to let some things go.”

In 2005, he was named to UD’s All-Century team. He and his NIT championship team were inducted into the Ohio Basketball Hall of Fame and a few years ago – because he had continued to play in recreation leagues and national Senior Olympics tournaments – he was enshrined in the Miami Valley Senior Olympics Hall of Fame.

In 2011 he and Shirley, who played four years of varsity basketball for Miamisburg High, began coaching fifth and sixth graders in the Miamisburg Rec League. By last season they were coaching three different age group teams in the league. 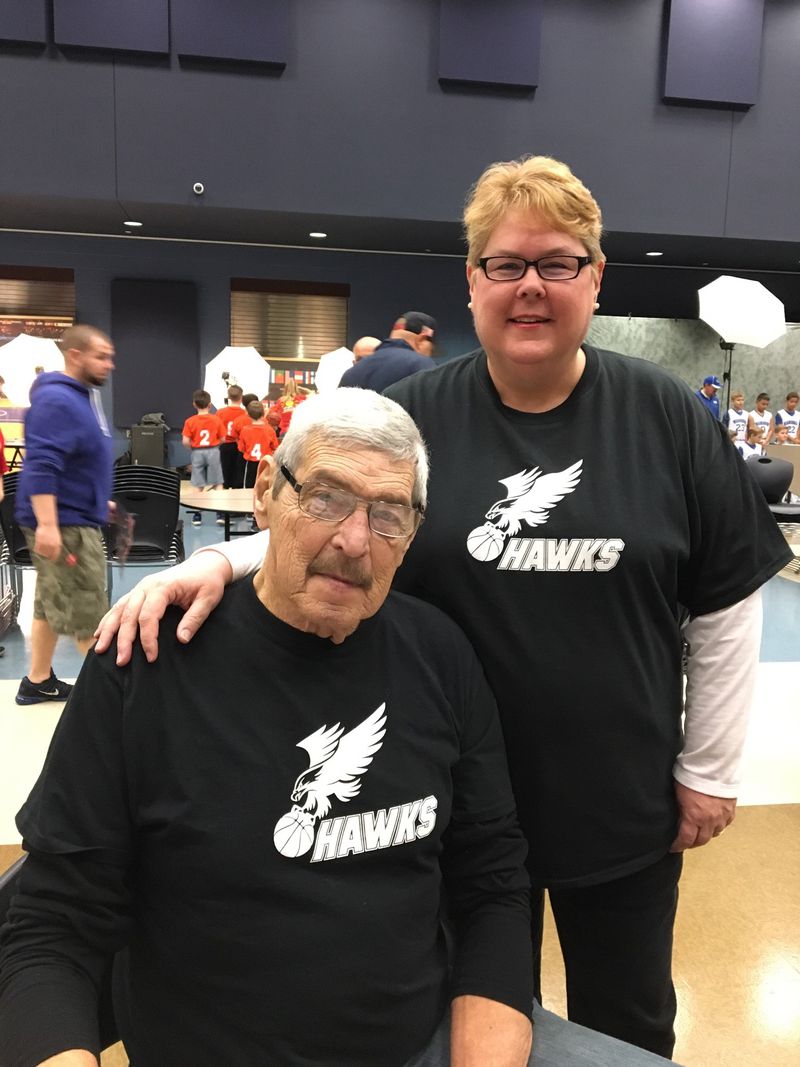 “I really liked that team,” he said. “They never got nervous. They played their game and times they were behind, they came back because they wore other teams down with their defense.

“I thought he had an excellent chance of going all the way. It was a really a shame for the boys and their coach and even the school and the fans. I feel they got cheated, but what are you gonna do?

“COVID messed so many things up.”

‘It’s the sickest I’ve ever been in my life’

Shirley said in late April – as her son was going through his illness – she felt like she was getting the flu. To ease the headaches she was getting, she used peppermint oil and realized “I couldn’t smell it. That’s when it hit me: ‘Oh my God I’m not smelling anything!’”

She tested positive for COVID and quarantined two weeks.

Julie’s positive test came near the same time her dad’s did. She went to the hospital for a day, but wrestled with the effects for nearly a month. She had a high temperature for 10 or 11 days, had shortness of breath, fatigue and nausea.

“It’s the sickest I’ve ever been in my life,” she said.

She’s back working at the hospitals and teaching fulltime at Edison – which has stringent COVID protocols in place.

She said she she’s seeing people with all kinds of symptoms when it comes to the coronavirus: “There are just so many strains now. I believe it’s mutating.”

One thing hasn’t changed she said: “It’s highly contagious. That’s why you need to wear a mask and social distance. And if you have symptoms, don’t go around other people. Do what you’re supposed to do so it doesn’t infect anyone else.”

Her dad agreed: “This is some nasty stuff. Take it from me, you don’t want to get this.

“Thankfully I stopped smoking in 2009. If I hadn’t been a basketball player all those years – if I hadn’t cleared my lungs out then – I think I’d be on a ventilator today.”

Released from the hospital Friday, he felt good enough Saturday to have his daughter take him to the barbershop. Julie said the prayers of a lot of family and friends are being answered now.

Shirley said she actually got a hint of that on Wednesday in her dad’s hospital room:

“He was on his medication and his steroids (which he’s still on) and his oxygen was OK. We were telling stories and all of a sudden he was laughing.

“Pretty soon he said, ‘I’ve got to stop this laughing. My oxygen level is going down!

“But it was such a good, hearty laugh. It just sounded so good. It sounded like Dad again,”

Once again Bill Chmielewski is trying to write his own script.