When Baja California investigators unearthed a fifth decomposing body in January from the same Tijuana house where a missing Orange County couple had been discovered a week prior, Baja State Attorney General Guillermo Ruiz Hernández labeled the property “la casa de mala” or “the house of evil.”

Besides the gruesome discovery, the property was unusual in another sense: authorities were able to establish who owned the home, though only because the owners had been buried in it.

That’s often not the case in Mexico. For the majority of cases where human remains are located on private properties, authorities are unable to establish ownership, according to state prosecutor Hiram Sánchez.

In a country where nonstop violence is on regular and dramatic public display — the brutality punctuated with heads left in front of schools, corpses hung from bridges, and journalists and public officials brazenly gunned down in the streets — thousands of victims disappear in clandestine graves, some of them buried in residences that don’t officially exist on any public record.

It’s just one more barrier authorities face in a country where getting a conviction is rare. Of the 6,443 documented murder victims between 2010 and 2016 in Baja California, prosecutors obtained convictions in just 252 cases — leaving 96 percent of documented murders without a verdict, federal data shows. By comparison the conviction rate for murder in the U.S. in 2018 was 70 percent, according to the U.S. Bureau of Justice Statistics. 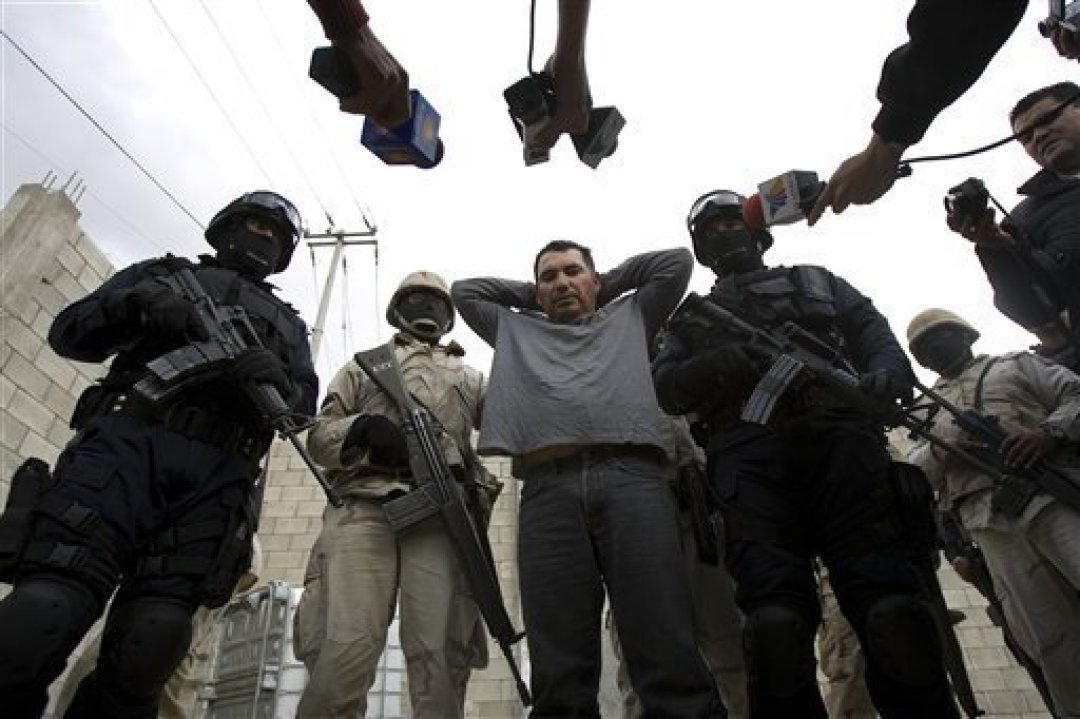 Santiago Meza Lopez, center, who allegedly helped a drug cartel dispose of hundreds of victims by dissolving them in acid.

Real estate attorneys call Tijuana “the improvised city” because neighborhoods and asentamientos, or squatter settlements, regularly spring up without approval from city planners. Years — sometimes, decades — pass before those residents demand to be connected to city infrastructure like roads, sewage and water. Ownership of the property is often never recorded in the public registry.

Much of Mexico’s land ownership practices date back to the concept of the ejido, a federally-owned piece of land that serves as a communal or cooperative farm, allowing people to work the land and profit from the fruits of their farming, but not to own it. It wasn’t until 1992 that the federal government began to recognize property rights within the ejido, allowing for more land to be sold or leased.

The concept carries on today in the form of the idea that if you build on it, and manage to stay on it, that land can become yours.

Once someone lives on a property for between five and 10 years, depending on the legal circumstances, they can petition to have it become legally theirs, one Tijuana-area real estate attorney said. Real estate experts say as many as 16,000 abandoned homes in Baja California are occupied by squatters.

“If it’s government-owned land (someone illegally settles on), then what has happened in the past, is that sometimes the government will give them the land. That has happened. Especially in Tijuana,” said the attorney, who asked not to be named because he believed the context of this story could put him in danger.

Mexico’s murky land ownership has civic and economic implications as well. If a neighborhood isn’t “regularized” by one of the five different agencies established in Tijuana to try to make these improvised neighborhoods official, residents typically don’t pay property taxes.

“Property taxes are much lower in Mexico than what you would pay in the United States,” said the attorney. “And the fact that you pay property tax doesn’t really make a difference on any future potential claim that you might have from that property.”

Academics estimate that more than 60 percent of Tijuana’s population lives in a home with unclear ownership, either because someone is living in a home they don’t legally have permission to be in or because the home doesn’t officially exist on any public record.

These unofficial homes make the perfect dumping grounds for criminal groups — often involved in drug trafficking — that are looking to dispose of bodies.

Historically, mass graves have been hidden in remote hillsides far away from neighborhoods and in wide-open spaces that searchers can easily access. But recently, criminals have been also hiding corpses inside homes or on properties.

That makes the job of police and the families of the victims more difficult, physically as well as legally. Whereas in the countryside, one would need a shovel to find a body, excavating corpses from under a house requires expensive tools and poses architectural challenges so the house doesn’t come tumbling down. 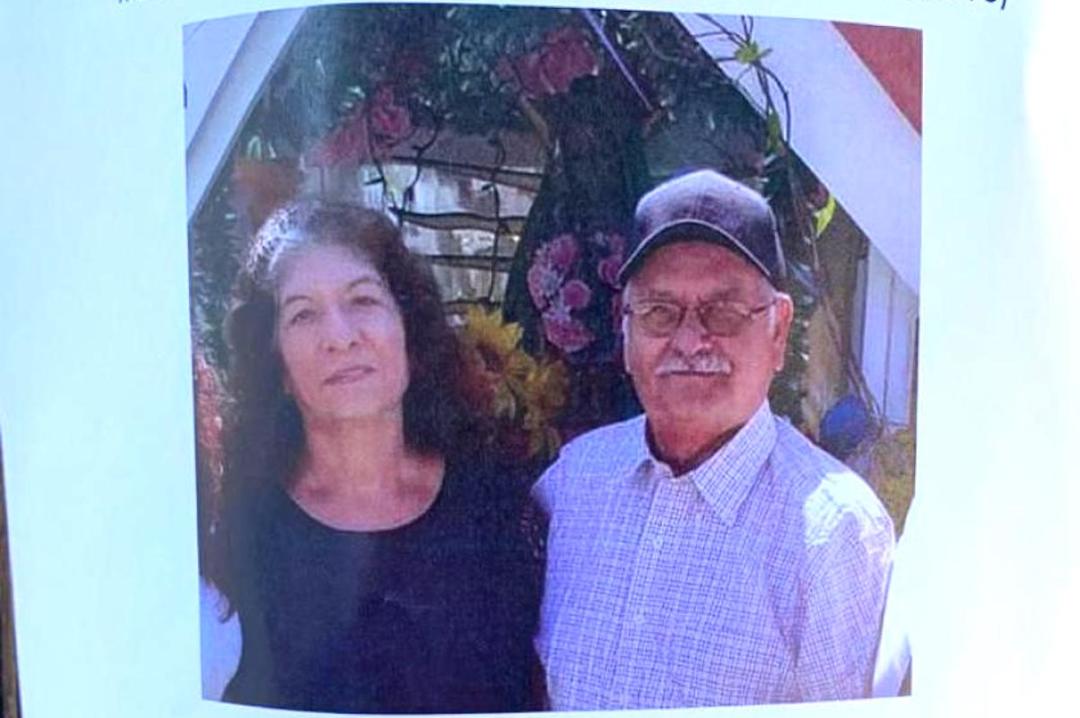 Authorities revealed that the bodies of Garden Grove couple María Teresa López, 65, and her husband, Jesús Rubén López, 70, were buried on their Tijuana property and were discovered with police canines.

In the case of the missing Garden Grove couple, state investigators had to wait days for a search warrant to enter the property but also for adequate tools to break the concrete under which the bodies of Maria Teresa López, 65, and her husband, Jesús Rubén López, 70, and others were buried.

Academic experts say hiding bodies in mass clandestine graves serves to terrorize communities in a different way because it demands a certain level of complicity.

“From our perspective, there is a relationship between the existence of clandestine graves and the idea of a secret that generates certain rites of socialization within a certain community,” said Jorge Ruiz Reyes, a human rights, political science and public administration researcher from Universidad Iberoamericana Ciudad de México.

“We believe that the burial of people in clandestine graves over the last decade has not been intended to make the bodies completely or perpetually invisible. There has been no intention to eliminate them in that strict sense,” Ruiz wrote in the university’s 156-page research paper “Violence and terror: findings about clandestine graves in Mexico between 2006 and 2017.” “If to dispose of them, maybe even to eliminate their identities, but not to make it impossible to find them or completely hide the practice of clandestine dehumanization linked to acts of violence.”

Likewise, searching for the bodies requires a fundamental challenge to the state or the criminals in power.

Some of the Tijuana properties where bodies have been discovered have been turned into memorials for the disappeared. One such memorial was built in 2018 by a group called United for Baja California’s Disappeared on land owned by a man who, in 2009, confessed to disposing of more than 300 bodies in vats of acid.

Santiago Meza Lopez later admitted he dissolved more than twice that number for the Arellano Felix drug cartel. Meza said he was paid $600 a week to leave dissolved bone fragments and teeth in properties all over Tijuana.

In July 2020, Mexico reported that more than 73,000 people reported as missing remain unfound, including 324 American citizens. 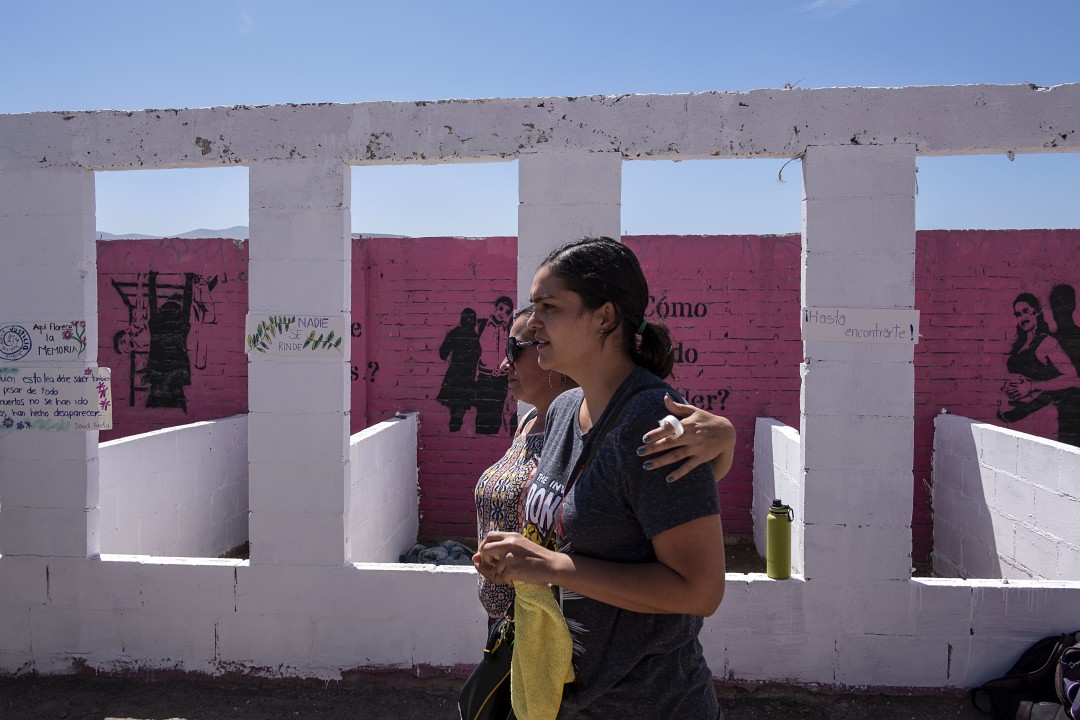 Women attend the inauguration of the Memorial to the Disappeared Memorial at La Gallera, property owned by a man who in 2009 confessed to disposing 300 bodies in vats of acid in Tijuana.

Nearly 5,000 bodies have been discovered in more than 3,000 clandestine graves since late 2006, Mexico’s federal government reported in late 2019.

Mass graves hidden throughout Mexico have become so common during the past decade that some searchers say they don’t have to look far or hard to find a body during their remote searches in the wilderness. Rather, the challenge is to find the specific body they are looking for.

Often, the gut-wrenching work of discovering the properties where bodies are hidden falls to the families and loved ones of the disappeared.

In Baja California, parent groups have discovered 109 bodies so far in 2020, all of them in the countryside, according to Don Fernando Ortegoza, the president of MOVED, an umbrella group of collectives that represents about 120 parents.

Colonia Campos is an unusual location for a clandestine grave because it’s in an urban neighborhood in southeastern Tijuana. That’s where parents recently dug for weeks underneath an unregistered, half-built structure. They had to stop and wait for state authorities to level it because of concerns the wobbly home was about to fall. The group was acting upon an anonymous tip that corpses were buried on the property.

State police initially threatened the parents and journalists with arrest for trespassing on the property, now named Casa Campos by the parent group, even though they also said there were no documents indicating who owns it.

The parents say the authorities refused to search the property for nine months. State authorities say they don’t believe there are bodies located on the grounds.

“If it costs me my life, I’m taking my son’s body out of that house”

Working in 12-hour shifts, the parents took turns camping out at Casa Campos, and guarding it 24 hours a day, so that state police wouldn’t be able to seize it before the state government granted the parents permission to be there.

The group protested for two days outside the state governor’s office before being granted assistance in tearing down the structure.

For the past two weeks, state workers have been demolishing an unstable structure at Casa Campos, under orders from Gov. Jaime Bonilla. No remains have been found.

Jesse Varajas, president of one of the collectives, Buscando a Tolando, or Searching for Tolando, said his group has received anonymous tips about at least 60 other homes and properties like Casa Campos throughout Tijuana where they might find remains of loved ones.

The initial search of Casa Campos began after Barbara Martínez received information about the location of the remains of her son, who went missing from Tijuana’s Urbi Villa Del Prado II neighborhood in October 2018.

“Mothers have been contacting me from all over Mexico; asking if we will go next to Guerrero or Sinaloa where they know their son is buried in a house they can’t access,” she said.