Jazz sax great Charles McPherson is shown with his wife and manager, Lynn, and their daughter, Camille, a San Diego Ballet soloist who inspired his new album, “Jazz Dance Suites.”

The album ‘Jazz Dance Suites’ features music inspired by his daughter, Camille, a San Diego Ballet soloist, and includes a song he co-wrote with his pianist wife, Lynn

Internationally acclaimed saxophonist Charles McPherson is not the first jazz great to launch his own record label, perform a livestreamed concert or teach music classes online. But he is surely the first to do all three at the age of 81. And he is very likely the first octogenarian artist in any genre who is set to promote his new album with a drive-in concert.

Equally intriguing, that album — the enchanting “Jazz Dance Suites” — showcases music he composed inspired by and dedicated to his daughter, Camille, 28. She is a featured soloist with the San Diego Ballet, for whom her father has been the composer-in-residence since 2015. She also teaches and last year became the company’s community education outreach director.

“Camille is the impetus for all this happening,” said Charles, who next Sunday performs a Del Mar Fairgrounds drive-in concert with his trio as part of the five-night 2020 Mainly Mozart Festival. “She’s the catalyst.”

Completing an all-in-the-family triumvirate is Lynn Sundfor McPherson, Camille’s mother and Charles’ wife, Lynn is his manager and oversees his website and social media pages. She also served as the artistic director for his new album, which features some of the most exquisitely crafted music of Charles’ seven-decade career.

Married for 34 years, he and Lynn co-wrote “Nightfall,” a gently cascading instrumental ode to their daughter in 6/8 time. It is one of many highlights on “Jazz Dance Suites,” the first release on his new record label, Chazz Mack Music. The cover photo for the album shows him cradling his alto sax while Camille executes a pinpoint attitude derrière.

“There is very much a synergy and family dynamic between Charles, Camille and Lynn, but they are extremely individual in what they each do,” said San Diego Ballet Artistic Director Javier Velasco.

“It is unusual to have someone of such excellence and international renown as Charles in your circle — that’s unusual in life! And Lynn is a real force behind the scenes. She has the desire, ability and fortitude to make things happen. She’s very supportive of her daughter and husband, in addition to being a really well-respected piano teacher in San Diego.” 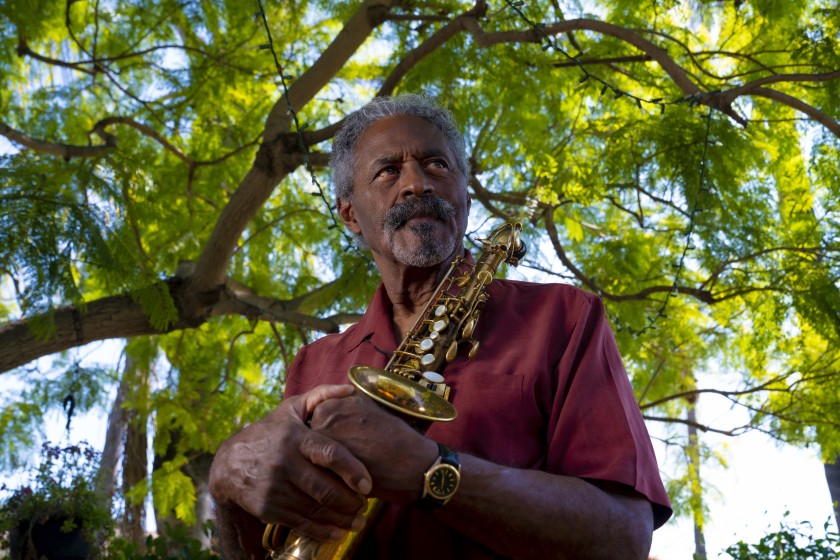 Charles McPherson is blossoming as the San Diego Ballet’s Composre-in-Residence. “Even now, although I get a lot of nice compliments about my writing, I think of myself as a soloist who can write — if it’s needed — as opposed to a writer who happens to play the saxophone,” he says.

‘A master of the instrument’

Long acclaimed for his musical eloquence, commanding technique and improvisational ingenuity, Missouri native Charles was only 20 when he joined the New York band of jazz giant Charles Mingus in 1959. His 12-year tenure in the group saw him perform on such superb albums as “Mingus at Monterey” and “Let My Children Hear Music,” as well as performing around the world.

Charles’ first solo album, “Bebop Revisited,” came out in 1964 and signaled the arrival of an alto saxophone dynamo bursting with skill and promise. By `1969, he’d made five additional albums, each more accomplished than the one before it. Instrumental excellence was Charles’ main focus, not composing, although he did write music — as required — for his solo releases.

“Back then, I didn’t think of myself as writer, and I wasn’t concerned with that. I wanted to become a virtuoso and master of the instrument,” he said.

“Even now, although I get a lot of nice compliments about my writing, I think of myself as a soloist who can write — if it’s needed — as opposed to a writer who happens to play the saxophone.”

Being appointed the San Diego Ballet’s composer-in-residence has provided Charles the opportunity to focus on his composing like never before. The consistently impressive results suggest he may soon be as celebrated for writing and honing finely calibrated music as he is for performing it.

“Reflection and Hope,” which Charles wrote following the nation-dividing 2016 presidential election, is a suitably moody chamber-jazz suite. It strikes a dark and foreboding tone before striking a cautiously optimistic note.

Discussing “Reflection and Hope” in a 2017 Union Tribune interview, Charles said:“Art should inform. And to inform exposes your own feelings about art and life. So I’m informing.”

His new album includes the contemplative, blues-drenched “Reflection of an Election,” the six-minute opening segment of “Reflection and Hope.” It is bookended on this handsomely packaged release by his eight-part, 29-minute “Song of Songs” and his six-part, 33-minute “Sweet Synergy Suite.”

Written in 2018 and 2015, respectively, both compositions showcase Charles’ ever-broadening artistic palette and his ability to seamlessly incorporate different styles and approaches from near and far.

Elsewhere on his new album, Charles expertly draws from Afro-Latin, Brazilian music and a panoply of jazz styles, including the dizzyingly intricate bebop that electrified him in his early teens and laid his artistic foundation. Hearing bebop sax colossus Charlie “Bird” Parker at such a young age had a profound impact that still resonates today for Charles, along with several generations of other musicians and listeners alike.

“I’d never heard anything like that before!” he said, recalling his high-flying Parker epiphany.

“It’s amazing how something like that can resonate with a little kid who doesn’t know anything. When I first heard Parker, I realized this guy was different than anybody I’d ever heard. He played notes very cleanly and every note makes some kind of linear sense. I didn’t hear that with other people, especially if they played a lot of notes.

“I’d never heard classical musicians before who played with such virtuosity and clean articulation. Then I heard Bird and I realized: This is it! This is the way you are supposed do to do it. You’re supposed to have your own notes. That confluence of musical ideas coming out with a flow and these long beautiful lines connected in a seamless fashion, this is what you’re supposed to do.’

“I could hear that as a little kid, even though I was too young to know about harmony or music theory at that time. To this day, when it comes to soloing (on the sax), getting that stream of consciousness is how I think. When you play a musical phrase it’s supposed to be like you’re talking.”

At 81, Charles is talking — and practicing — on his saxophone more than ever.

Part of that is pragmatic; the technical demands of playing the instrument become even greater during a time when concert tours and non-drive-in performances are at a standstill. And part of that reflects the endless enthusiasm he has for his saxophone and his art.

“Wisdom is based on seeing the bigger picture, not on seeing part of the picture. You can see things at 80 that somebody at 50 can’t see. Young people have energy, but not wisdom,” said Charles, who embraces being a perpetually active jazz elder.

“So you just need to be creative. The other thing is you never lose that childish enthusiasm for what you do. Basically, it comes down to passion. When you lose it, that’s when what you do becomes banal and pedestrian. 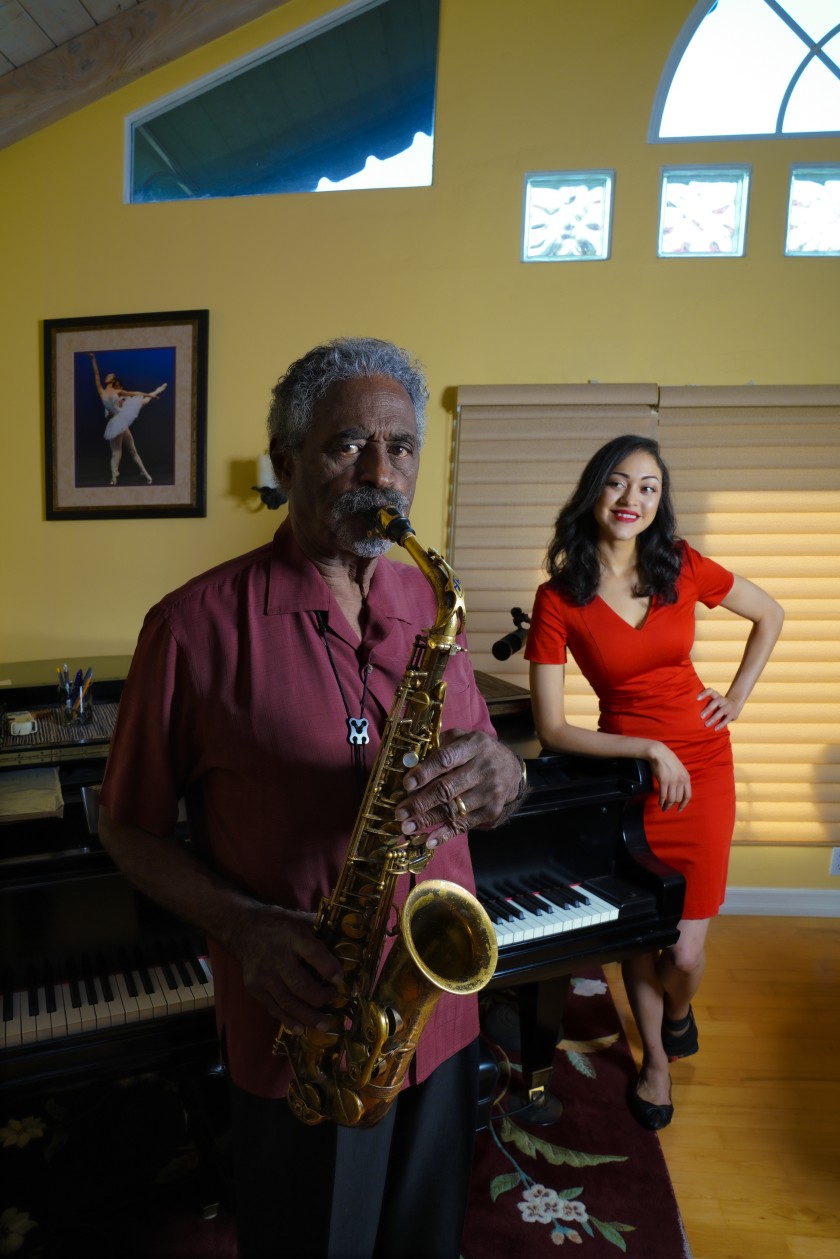 “I really looked silly trying to dance, because I’m not flexible,” says Charles McPherson, recalling the ballet lessons his daughter Camille (at right) gave him when she was six. “And Camille was a kid who could turn herself into a pretzel whenever she wanted, while I could barely bend.”

Porter will be the pianist in the trio for Charles’ Mainly Mozart-sponsored drive-in concert, which also includes bassist Rob Thorsen and drummer Richard Sellers. They will be joined by two Mainly Mozart Festival Orchestra members, trumpeter Conrad Jones and violinist Zachary DePue. The repertoire will include “Reflections on an Election” and selections from “Sweet Synergy Suite,” along with classics by Duke Ellington and George Gershwin.

Lynn and Camille McPherson will be in a car in the audience. Any thoughts of having Camille come on stage to make a surprise dance appearance with her father were dashed when she broke her left foot on Sept. 22 while rehearsing for a video performance.

The grace and agility she has brought to her San Diego Ballet performances are manifested in the music on “Jazz Dance Suites,” whose compositional sophistication and precision is striking.

Has composing for the San Diego Ballet changed how Charles thinks about the form of music in relation to the physical movements the music is written to accompany?

“That is totally spot on,” Charles said.

“Once a person writing music writes for dance, every new thing you do informs everything else you do thereafter. The emotional variety is far greater when you write for dance and movement. You are thinking about a definite storyline, which is episodic. Writing jazz music, there are areas open for improvisation, but the dancers are never improvising. Therein lies the curveball.

“The movement aspect really determines what tempo you use, the colors, the tone, the feelings. It’s almost like you’re writing a score for a movie, so it brought an awareness I didn’t have before.”

The opportunity to develop that awareness can be credited almost entirely to one person.

“I would not be writing for the San Diego Ballet, or have made this album, if Camille was not dancing with them,” Charles said. “I used to take her to many of her ballet lessons when she was young. And Lynn and I have watched her dance many times since she was a kid.”

Camille, in turn, laughingly recalls watching both her parents dance — as herstudents — when she was 6 and had started taking lessons at Ballet Center West in Mission Hills.

“I asked my ballet teacher, Michelle Bartolomei, if she could make me a cassette tape of our ballet class music so I could practice at home,” Camille recalled. “One of the games I liked to play was being the ballet teacher. And who did I have for students? My parents! They were good sports. I know my dad did not like it, but I could get him to do it.”

In separate interviews, Lynn and Charles both chuckled as they recounted taking dance lessons from Camille, who relished being the expert and telling her parents what to do.

“She was an extremely good teacher, even as a little kid, although some of the classes she gave us would go on for a long time!” Lynn said. “It was funny because Charles is not a dancer.”

Indeed not, although — even at 81 — he has the muscular build of an athlete one-third his age.

“I really looked silly trying to dance, because I’m not flexible,” he said. “And Camille was a kid who could turn herself into a pretzel whenever she wanted, while I could barely bend.

“It was fun, but she was quite serious about it. She would be like: ‘Plié this!’ and ‘Grande jeté that!’ Lynn was much better than me. But I would do it because I’m Camille’s dad, and I’m a big teddy bear, although I looked like a cartoon character — one of the hippos in ‘Fantasia’ — when I tried to dance.”

Charles burst into laughter when asked if there was a photo of him receiving a dance lesson from the then-6-year-old Camille that could run with this article.