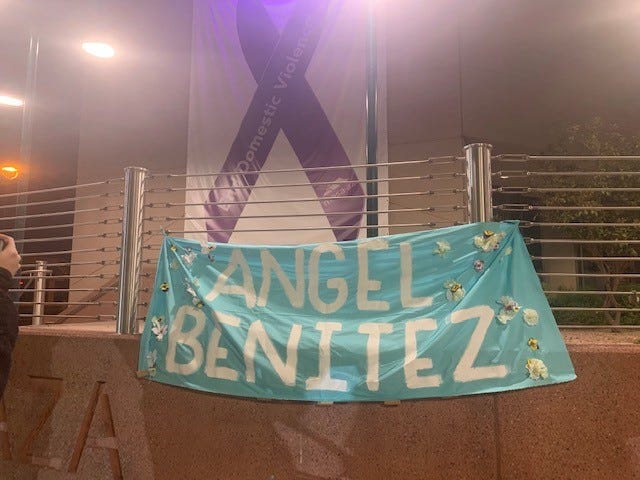 Followed closely by the hum of a drone and four police officers on bicycles, around two dozen protestors gathered in downtown Mesa Saturday night to demand justice for Angel Benitez.

Protestors met at Mesa City Hall near Main and Center Streets around 7 p.m. The march began around 8:15 p.m. and started downtown before entering residential neighborhoods and circling to the Mesa Police Department. The group returned to city hall around 9:15 p.m.

As the group walked down Main Street past local restaurants and shops, some sitting in outdoor patios raised their fists in solidarity, while others shouted back, saying “All lives matter.”

Darien Barrett, an organizer of Tempe Against Police Violence, led the crowd by way of chants and directions, but said he wanted to make it clear Saturday’s march was not affiliated with any particular organization. Barrett said declaring an affiliation is too dangerous after the Phoenix protest in honor of Dion Johnson and Breonna Taylor on Oct. 3 resulted in seven arrests. After the arrests, Black Lives Matter Phoenix Metro said on their Instagram that police “stalked and ambushed” leaders and intentionally pushed through white allies to tackle and arrest Black leaders.

“No one is safe in Phoenix anymore,” Barrett said. “Everyone is a target. It is too dangerous of a game to play these days. From now on, we will share our protests on social media independently. That is how we continue in numbers.” 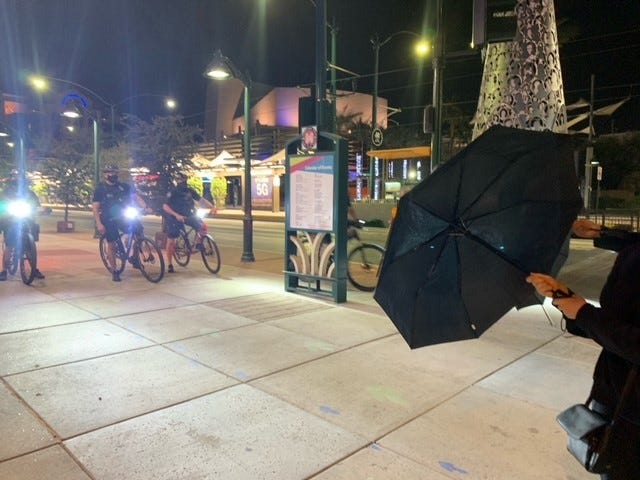 When the march reached the Mesa Police Department, protestors kicked the glass doors, asking officers to come outside. One officer warned the group, declaring “I am giving you a heads-up. You know what is about to happen.”

As attendees headed back to city hall to avoid arrest, Barrett said he is growing “sick and tired” of not being able to trust the police that are “supposed to protect the people they serve.” Mesa police knew Benitez did not have a weapon when they shot him, Barrett said.

“Even if he did, it wouldn’t matter,” he said. “You can have a gun in Arizona at 18. Angel was 21. He broke no laws and they shot him anyways. Why should we follow the rules if they can’t?”

What police say happened on Sept. 25

Police first responded to a Panda Express near Dobson Road and Rio Salado Parkway for reports about a man who was “passed out” behind the wheel of a car, Tempe police spokesperson Det. Greg Bacon said in a statement.

Officers at the scene learned the car was reported stolen earlier this month, Bacon said. When they were attempting a traffic stop in the parking lot, Benitez awoke and fled in the vehicle, Bacon said. Police later found the vehicle backed into a covered parking space in Tempe near University and Evergreen roads with Benitez still inside.

Benitez initially complied with officers’ commands to put his hands in the air but then “dropped his hands out of their view and towards his waistband” while still in the vehicle, Bacon said. 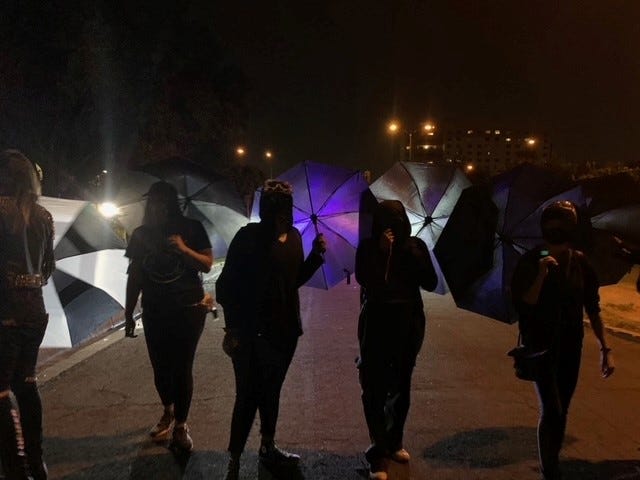 Benitez was transported to a local hospital and pronounced dead an hour later.

On Oct.1, the Tempe Police Department, which is leading the investigation, released footage from the body worn cameras of three of the officers involved the morning of Sept. 25. Based on the video, more than a dozen shots were fired and it is not clear how much time passed before Benitez received medical attention.

Out of the two dozen attendees, almost all wore black from head-to-toe, including ski masks, hoods and sunglasses. In addition, they used black umbrellas to shield the crowd from police cameras and flashlights.

One attendee, Danny Gonzalez, 25, said he was disappointed by the lack of support.

“I am definitely surprised to see so few people here tonight,” Gonzalez said. “It could have been a lot better, but it is certainly better than nothing. We have to hold onto that.”

Wesley Peacode, who has attended Black Lives Matter protests across the Valley since the beginning of the summer, said a small turnout doesn’t take away from “the strength of their message.”

“Even if there were two out here, I would appreciate it,” Peacode said. “These people could have been anywhere, but they chose to be here. That puts them, us, on the right side of history.”