The Jets were outscored by 50 in the first halves of their first four games, so it was important that the Cardinals offense had success early. It did. It wasn’t necessarily pretty, but scoring 17 points in a half is solid. The first touchdown came on the second possession. Chase Edmonds took a handoff off right tackle and scored from 29 yards out. It looked a lot like a touchdown run Edmonds made a year ago in MetLife Stadium against the Giants. Edmonds looks more explosive than starter Kenyan Drake. And there’s no doubt his vision and decision-making abilities are better than Drake’s right now. It’s time to give him the ball more. There is still room for two backs in this offense, and on Sunday we saw the two play together more than they have in other games this season. As far as the passing game, the reason you pay receivers who can score touchdowns became evident in the fourth quarter. On the same possession, DeAndre Hopkins made two catches in tight coverage. One was for 45 yards and the other 37 yards for a touchdown. Quarterback Kyler Murray played better than he has in recent weeks, but the good news for the Cardinals is there is room for growth. The 45-yard deep pass to Hopkins was underthrown, for instance. But Murray’s running ability is difficult for defenses to handle. It gives the Cardinals so many options, including in goal-line situations. Murray had another rushing touchdown, giving him five for the season. That’s one short of tying a franchise record for quarterbacks.

That last one is a surprise. Gardeck, in his third year, is a standout on special teams but until Sunday, he had never played a defensive snap. Gardeck was in the game in place of Chandler Jones, who suffered a biceps injury in the first half. That can be a devastating injury for a pass rusher, and it sounds as if Jones will be out for the rest of the season. The Cardinals already were thin at that spot, given Devon Kennard’s calf injury. It’s a concern going forward. If first-round pick Isaiah Simmons can’t get playing time now, it will be stunning and troubling. But that’s borrowing trouble. Let’s stay in the moment and appreciate what a pleasure it is to watch Baker play football. He has no regard for his personal well-being and throws around his body like he’s got another one back in the locker room. Yet, he’s a very sound tackler. His diagnosis of a reverse and the tackle he made for a 14-yard loss early in the fourth quarter was a key point in the game.

The Cardinals will need to perform better against better opponents. Andy Lee had a so punting day a rarity for him. And Christian Kirk muffed a punt that the Cardinals were lucky to recover inside their 10. Zane Gonzalez made a 47-yard goal after a hurry-up possession at the end of the half. 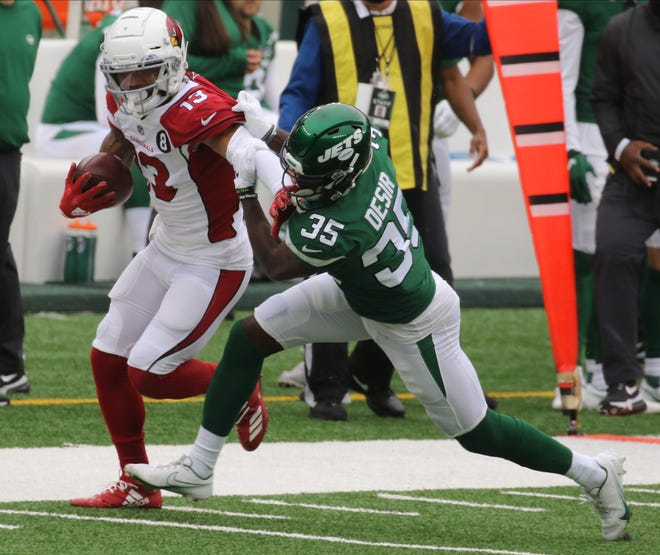