In an unusual move, DeKalb County and its school district will have the chance to argue against a tax break already approved for a Brookhaven development — one that will cost the county and schools millions in tax dollars.

The Dresden Village project, initially nicknamed “Project X,” is a mixed-use development planned for a 4-acre lot on Dresden Drive near Caldwell Road. Its approval by the Brookhaven Development Authority, along with preliminary approval of a $13.5 million tax break for developers, has strained the relationship between Brookhaven and county leadership.

The decision was criticized by DeKalb County Commissioner Jeff Rader, whose district includes Brookhaven, and some residents, who claimed the approval process lacked transparency and will redirect millions of tax dollars away from the city, county and school system.

“The (DeKalb County School) Board looks forward to the opportunity to show that the proposed bonds wrongfully remove tax revenue from the school district that is needed for the education of students while, at the time same, adding students and the expenses for educating those additional students, to the school district,” Board of Education Vice Chair Marshall Orson said Friday in an emailed statement.

The bonds to fund the tax abatement must be approved in court before they can be issued, but the Dresden Village development can move forward regardless.

The tax break would allow development companies Connolly and Gables Residential to save on their property taxes over the next 22 years, which Connolly’s CEO told the city council in Augustwas crucial for the project to become a reality. Phone calls made to Connolly’s main office requesting comment were not returned.

Developers from Connolly plan to build more than 180 luxury apartments and seven condo townhomes as part of the project. It also will include 30,000 square feet of retail shops and restaurants along the corridor, which is just east of Peachtree Road and the Brookhaven MARTA station. The project is estimated to cost about $61 million, and Connolly has agreed to fund several infrastructure improvements around the city as part of the deal, including a new pedestrian trail and the elimination of a traffic signal. 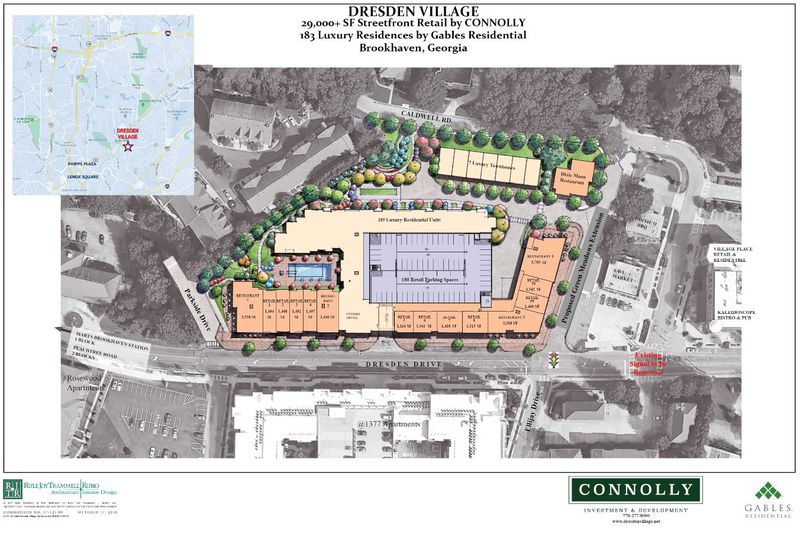 The city argued the development will ultimately be a boon for Brookhaven despite the tax abatement, citing an economic consulting firm’s analysis. The report stated that Dresden Village would bring in millions in new property and sales tax revenue over the next three decades.

The deal’s details and the tax cut were not made public ahead of the August meeting. The development authority cited state law that allows discussions about real estate transactions to be protected under state law. Rader said the city was legally able to keep the deal under wraps but accused the city’s leaders of being “needlessly” secretive to avoid public scrutiny.

Rader and other critics have argued that a tax break should not be necessary for land that is already primed for redevelopment, and that the city is unfairly diverting tax revenue away from the county and school system.

“We are happy that (the judge) accepted our petition and gave the county and school district the opportunity to intervene,” he said Friday. “We think there are some very valid concerns regarding the uniformity of the evaluation of the property. You can’t value one property for a different reason than another property, and that’s a great deal of what has happened with these bond validations.”

The property tax abatement influenced Rader’s decision to delay the release of $6.3 million in federal coronavirus relief funds to Brookhaven, he previously said. The city has since received and allocated the funds.

“We support the decision of the development authority and look forward to showing the court why this project should be affirmed,” Mayor John Ernst said Thursday in an emailed statement.

John Park, a Brookhaven city councilman who represents the Dresden Drive area, said he supports the abatement and the decision by the development authority, which operates separately for the city council.

“We respect the court’s process and have no problem defending the city’s economic growth,” he said in an email.