The deadline draws near: Anyone looking to adopt a desert tortoise this year from the Arizona Game and Fish Department needs to get their application in soon before it is time for the reptiles to hibernate for the winter.

Tegan Wolf, the desert tortoise adoption program coordinator for the department, said over email that she thinks Oct. 19 will be the application deadline this year, but “you want to get your application in as soon as possible.”

Wolf said close to 800 tortoises have been adopted since the program formally began in 2016.

Fred and Debbie Santesteban live in Chandler and decided to adopt a desert tortoise from Arizona Game and Fish in 2001. Today, Gus still lives in his burrow in their backyard.

After two decades Gus has figured out some tricks: “He’ll open the door and come in for the day,” Fred said, explaining that Gus can use his front leg to open their sliding door.

The Santestebans have been charmed by their reptile pet. “He’s part of the family and he’s part of the house,” Fred said about Gus. Debbie added that Gus has his “picture on the Christmas card.”

Why are desert tortoises available for adoption?

Desert tortoises are found in the wild in the Sonoran Desert and it is illegal to take one from its natural habitat and keep it as a pet. Despite this, they have become desirable as pets and some people illegally breed them, Wolf said.

“They can lay up to 12 eggs in captivity and most of them survive,” she said. “Because they live so long, it is usually about 10-12 years before they are large enough that people realize they are in over their head with 30-40 larger tortoises.”

She also some tortoises need to be rehomed because they live so long that people realize they can no longer take care of the tortoise as it ages. A desert tortoise has a lifespan of around 80 years.

Fred Santesteban said this is something important to consider when adopting a tortoise. He recommends you either “put it in your will or make arrangements” because they may outlive their human companions.

How to prepare your yard for a desert tortoise

Preparing a burrow is critical for being able to adopt a desert tortoise from Arizona Game and Fish. The website provides detailed instructions for making a burrow in your yard that will protect the animal from extreme heat and also the cold season when it is hibernating.

In a YouTube video, Wolf explains how to make a burrow for a tortoise with either a large 12-inch PVC pipe or cinder blocks. When you submit your application to adopt a desert tortoise, you need to include photos of your completed burrow.

Wolf said there are other considerations to have a safe environment for a desert tortoise. She said to make sure there is no open fire pit and plenty of shade.

What does a desert tortoise eat?

Native plants are good fodder for desert tortoises, Wolf said. Arizona Game and Fish has a lengthy guide of what foods are best for your new tortoise. It generally recommends native plants and grasses that are not treated with fertilizers or pesticides. 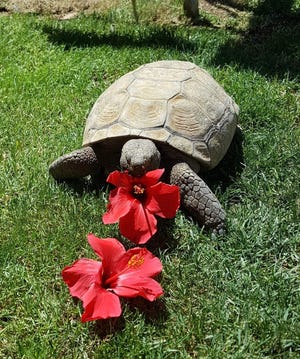 Desert tortoises eat only plants and favor vegetation such as hibiscus, curly mesquite grass and prickly pear. Their diet can be supplemented with store-bought vegetables such as bell peppers, turnips and collard greens.

How to adopt a tortoise from Arizona Game and Fish

The adoption program runs from spring through fall each year, so time is running out. Read the guidelines and submit your application at https://www.azgfd.com.