By Bo Emerson, The Atlanta Journal-Constitution

Not just for kids, Halloween is also a chance for neighbors to meet and greet.

Halloween 2020 looked like it was going to be killer.

Oct. 31 will fall on a Saturday night, with a full moon, and an extra hour of sleep the next morning because of the end of Daylight Saving Time. The table was set for the best Halloween ever.

Then the table was flipped by a deadly pandemic.

The Centers for Disease Control and Prevention gave Halloween the thumbs down, describing as “higher risk” any “traditional trick-or-treating where treats are handed to children who go door to door.” Stay home, said the CDC. Decorate the house and stage a virtual costume contest online.

Some municipalities said the same thing. DeKalb County’s Avondale Estates warned against trick-or-treating, with an announcement saying “Out of an abundance of caution, the City of Avondale Estates will not be supporting or sanctioning any Halloween activities that would pose a health risk.”

Many cherished community events have been eliminated. HarvestFest on the square in Marietta will not take place Oct. 17 as planned, nor will the Little 5 Points Halloween Festival and Parade, also planned for the same day. 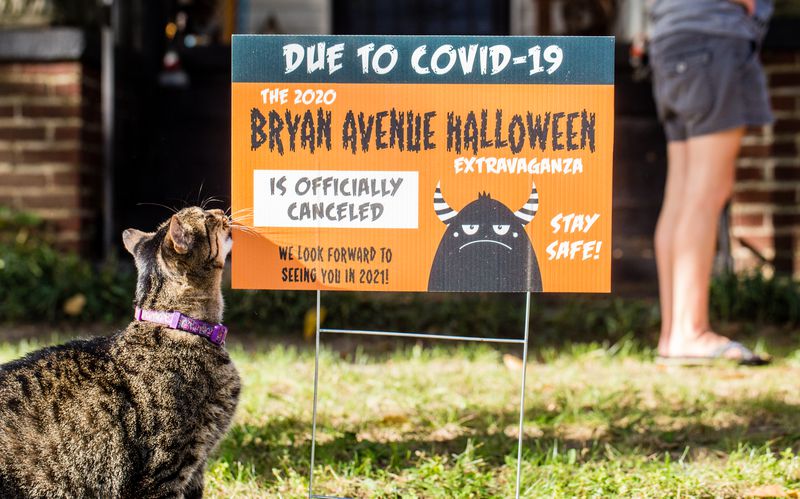 The business association in Little Five Points has instead filmed a “virtual” parade which it will stream on Oct. 17, showing various personalities walking from right to left across the screen, led by parade Grand Marshal Puddles Pity Party, the seven-foot clown with the golden voice.

In the new century, Halloween has grown from a children’s event to a community get-together, when entire neighborhoods dress their yards up to the extreme, don costumes and join in outdoor revelry. Atlanta’s mild October weather seems to welcome this expanded holiday, a kind of Mardi Gras for the rest of us. 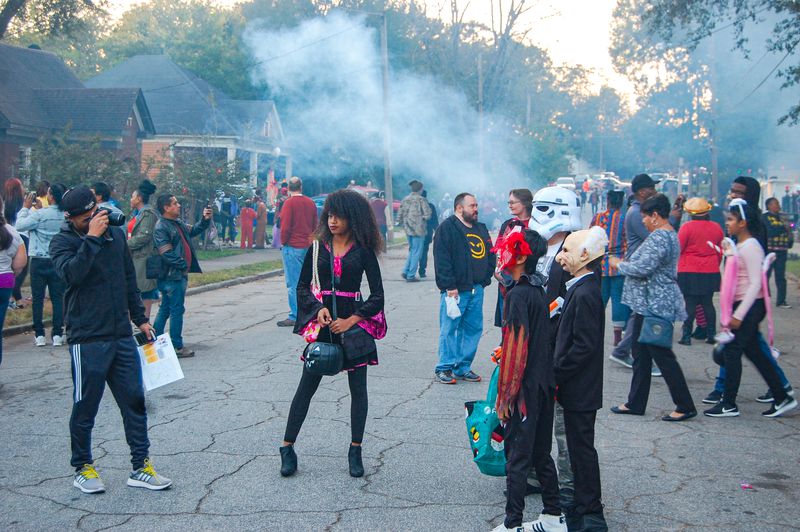 In Jefferson Park, an East Point community, Halloween celebrations have been historically huge. Sheila Merritt’s friends and neighbors on Bryan Avenue hire off-duty security, rent portable toilets, close off the street and have a ball. An average Halloween will bring 1,800 children to the block, and that’s not counting their parents and chaperones. Grown‐ups dress as zombies and perform scary dramas.

Yet, this year Bryan Avenue will be empty.

The neighbors agreed not to decorate their yards rather than create a spectacle and draw crowds. Many houses are sporting signs that tell stray visitors that Halloween is canceled. “I’m saddened beyond words,” said Merritt, 55, an event planner whose business has also been depressed by the COVID-19 pandemic. “It was a painstakingly difficult decision for all of us.”

On Halloween evening, she and her family plan to have the lights out. “We’re just going to sit on our back patio, in the dark, drink wine — and cry.” 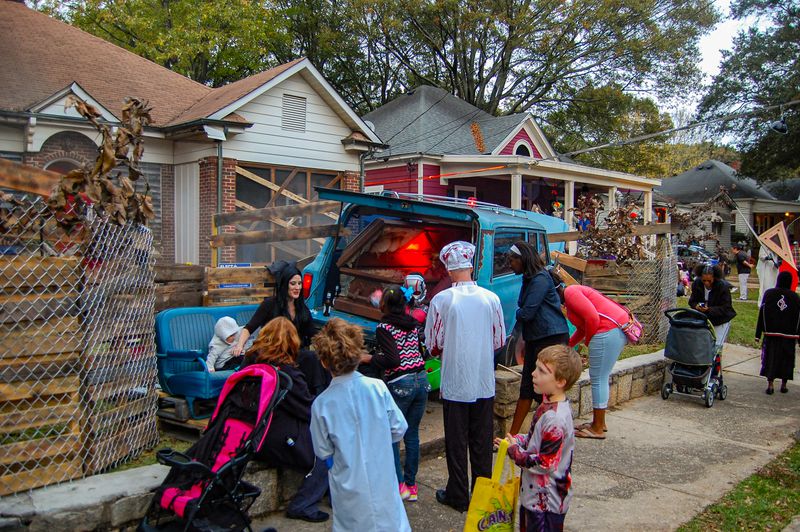 When the street festival is canceled, more is lost than just a chance to have a big party, said Becky Shaw of Decatur.

Shaw’s Winnona Park house is notorious for its elaborate Darkthorne Cemetery display, with dozens of figures crawling out of the ground or looming above the headstones, some of them 9 feet tall.

She is usually prepared with enough candy for 700 visitors. This year she doesn’t know what to do. “We can watch the numbers and see what’s happening as it gets closer,” she said. “We certainly are not going to do anything that would be irresponsible.”

On the other hand, she hates to see the most communal night of the year slip away. “Here, it’s people out walking together, they take their kids in wagons, they’ll carry their glass of wine, stop at each other’s homes, have fires in the front yard, it’s just a spectacle. It’s kind of a joyous occasion for almost no reason at all. And now what?”

A street get-together, just before a tumultuous election, could be a critical balm in a year of vicious political rhetoric and deepening cultural divides.

Shaw, 58, and others have said that as politics and the election drive us apart, we need that kind of community connection. “This year of all years we need a distraction,” she said.

There’s something else. Halloween is the herald of the holiday season, a practice run for a time when we will have to face questions about gathering and spreading disease. For many would-be celebrants, it’s a depressing reminder of things to come.

Of course for a business owner, it will be depressing for other reasons. The day of the Halloween festival, with 20,000 showing up for the parade, is usually the biggest day of the year for many Little Five Points merchants, including the Corner Tavern.

Canceling the festival for Melanie Rabb is like canceling Black Friday. The virtual Halloween Parade will provide some emotional support, in the wake of lost revenue.

But when the video of the parade streams on Oct. 17, Rabb won’t watch it on her laptop. She’s going to need some backup.

“I don’t feel like I can watch this home alone,” she said. “We’re going to put a screen up and watch it in Little Five together.”