By Chris Joyner, The Atlanta Journal-Constitution

When Republican congressional candidate Marjorie Taylor Greene and Sen. Kelly Loeffler waded into the crowd at a rally in Ringgold last month, they were flanked by a heavily armed escort — the men and women of the Georgia III% Martyrs, a private militia.

The group formed in April, but few outside of militia circles were aware of them until they showed up with Greene, who later posed for photos with the group.

“We are ready to come out into the open now,” Martyrs leader Justin “Slayer” Thayer said. “We are fully prepared and ready, and we want people to know that we are here.”

The Martyrs are one of around 20 active militias in the state that regularly pop up in public carrying military-style assault weapons, despite a state law — never enforced — that prohibits them.

That hands-off approach needs to be reassessed, some observers say, now that President Trump and others are sowing doubts about the legitimacy of the November election, raising alarms that groups of supporters, perhaps armed, will show up and intimidate voters.

In an interview this week with The Atlanta Journal-Constitution, Thayer said he was encouraged when President Trump didn’t bite when asked to condemn militias in the first presidential debate.

“Instead, he said ‘stand by,’” he said, referring to Trump’s callout to the far-right Proud Boys. “I feel he will be calling upon us very soon.”

He said his group, which he described as defensive, does monthly field training exercises and requires that each of its 55 “combatant” members take part.

“We are expecting and preparing for a civil war by the end of 2021 if things keep going the way they are,” he said. “We are stockpiling ammo. We are going over basic firearms training, maneuvers, communications.”

Mary McCord of Georgetown University School of Law’s Institute for Constitutional Advocacy and Protection said groups like the Martyrs exist across the nation despite state laws that ban private paramilitary groups.

In Georgia, a misdemeanor criminal statute that dates back to the 1950s bars private groups from forming “themselves together as a military unit or parade or demonstrate in public with firearms.”

Yet private militias operate freely Georgia. In August, several armed militia groups converged on the city of Stone Mountain, forming columns and facing off against left-wing counter-demonstrators throughout a tense, and at-times violent, afternoon that shut the city down for most of the day. In a troubling development, many in the left-wing group were armed with assault rifles or pistols as well, some under the banner of the Coalition of Armed Labor, a leftist answer to the far-right militias. 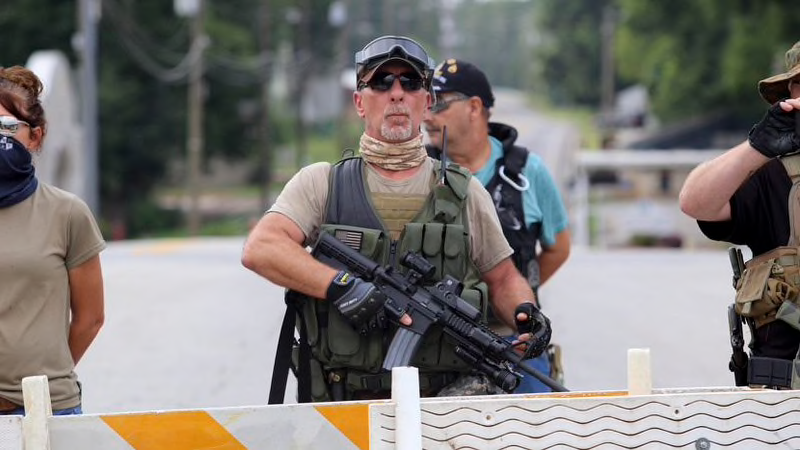 The Martyrs didn’t go to Stone Mountain, but Thayer said his group has shown up in Carrollton, Bremen and elsewhere to stand armed watch over Black Lives Matter protests to defend against “rioting and looting in our communities.”

“Every one that we have been at has been peaceful,” he said. But he said his militia is prepared to “defend our precincts.”

“If the police can’t handle it, we will step in,” he said.

Old laws get a new look

McCord said such self-appointed policing is against the law, but she said states have been reluctant to take action, in part because of a “widespread and deeply held misunderstanding about the Second Amendment.”

The Second Amendment to the U.S. Constitution states, “A well regulated Militia, being necessary to the security of a free State, the right of the people to keep and bear Arms, shall not be infringed.” McCord said the militia in the amendment refers to the official state militia, not private groups.

“The Second Amendment does not protect this type of private militia or paramilitary activity,” she said in a recent conference call with reporters. “Of all the gray areas in the Second Amendment, this is not one of them.”

States have long prohibited such groups, even states like Georgia with permissive laws regarding the open carrying of firearms. Georgia’s law, in fact, distinguishes between private and state-sanctioned militias, exempting “the organized militia, components of the armed forces of the United States, and bodies of the police” from the prohibition against forming and carrying firearms in public.

“Those laws sat on the shelves and got dusty until recently,” she said.

Chaos-creating events like 2017′s Unite The Right rally in Charlottesville, Va., have state and local officials taking a new look at those laws as a way to counter the growing militia movement, especially amid concerns that armed militia could show up at polling places in this year’s election. Early voting began this week in Georgia ahead of Friday’s visit by President Donald Trump, who has urged his supporters to “go into the polls and watch very carefully.”

McCord said the Georgetown institute has prepared online fact sheets on state laws prohibiting paramilitary activity as well as advice on preventing voter intimidation, and they’ve been contacted for advice by states and cities on how it can counter armed rallies without violating the Constitution. The cities of Dahlonega and Newnan, which have been the sites of far-right demonstrations in recent years, are among those who have asked for help, she said.

Marvin Lim, a Gwinnett County Democrat who won the state House District 99 Democratic primary and is unopposed in the November election, said there are unanswered legal and political questions about whether the state can prohibit private militias.

“There is certainly confusion as to whether these laws can be applied in a way that it doesn’t impinge on people’s free speech rights,” he said.

Lim, an attorney and former lobbyist for the ACLU, said there are a lot of laws on the books that aren’t enforced. Using a 65-year-old law that has never been challenged in state court may not be preferable to other legal options, he said.

For instance, earlier this year police arrested members of a violent fringe group in Rome who were allegedly conspiring to murder a Bartow County couple they believed to be antifa leaders. That group had allegedly acted in a paramilitary manner, but were charged with other, more serious crimes, including conspiracy to commit murder.

But Lim said taking no action against outlaw militias has consequences. “You wait until it’s too late and then you have Charlottesville,” he said.

For their part, militia leaders in Georgia appear unconcerned.

Chris Hill, the leader of the III% Security Force, one of several militias to demonstrate at Stone Mountain, said he was aware of calls to enforce state laws prohibiting military-style behavior.

“Wake me up when you and Mrs. McCord are able to make III% Security Force illegal,” he said in an email.