Today I made my version of Brussels sprouts that were first marinated in a spicy sweet sauce, then seared in a hot pan and finished off in the oven.

I’ve been seeing versions of this Brussels sprouts recipe floating around the internet over the past couple of weeks. Not unusual at all, as cooler weather is moving in and these sorts of more savory dishes are common.

I decided to try my hand at it, so I made up my own version of the marinade using grainy and regular mustard, honey, black pepper and soy sauce, then sliced my Brussels sprouts in half and tossed them in the marinate to sit for about fifteen minutes while I preheated my oven to 400 degrees.

The idea was to place the sprouts, cut side down, in a hot pan with a little oil and give them a good sear for two to three minutes, then let them finish cooking in the oven till tender. Once the sprouts were cooked through, they would be tossed in the leftover marinade to make a glaze.

So, I got my largest cast iron pan really hot, poured in a couple of tablespoons of olive oil and waited till the oil was shimmering. Then I placed my drained Brussels sprouts (reserving the leftover marinade) into the hot oil to sear.

Instead, the moisture from the marinade heated up and created steam around the sprouts. Just what I didn’t want!

I tossed them around for a few minutes but didn’t get a safisfactory sear, so I gave up and placed them in the oven for the prescribed twelve minutes and tested them for doneness.

Not done. So I gave them ten more minutes.

This time, they were tender but a bit dried out. Not up to my expectations. I pulled them from the oven and tossed them in the remaining marinade, then served them with steamed rice and a baked sweet potato. 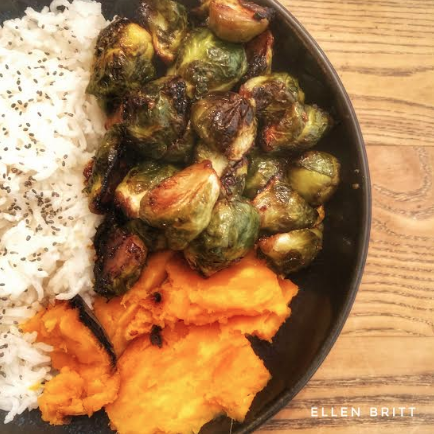 They tasted good but the texture was just not up to my standards.

Here’s how I would attempt to fix this the next time around:

One – Use a bigger pan. If I had a bigger saute pan, that might have helped dispel the moisture from the marinade which caused the sprouts to steam.

Two – Forgo the marinade until after the sprouts were seared. Once I had my desired sear, I could then put the sprouts in the marinade for a few minutes, then spread them on a baking sheet and finish them in the oven. I think this would have worked much better.

The sprouts were ok, and I didn’t have to throw them out by any means. I’m just glad I wasn’t making them for company. So, don’t be afraid to experiment and be sure to test an unfamiliar recipe before you intend on serving it to company. Let’s eat y’all…!