FORT VALLEY — At the end of a dusty gravel road lined by pecan trees and a Joe Biden campaign sign, Randy Goss stood waiting for a visitor with a sage piece of local wisdom: “So goes Peach County, so goes the nation.”

The 33-year-old Democratic activist is right. This Middle Georgia area is one of the few swing counties in the state — and one of the nation’s more reliable bellwethers for presidential contests.

The county’s voters have picked the eventual presidential winner in just about every election since 1992, swinging from Barack Obama to Donald Trump in the past two races. The exception was 2000, when Al Gore captured Peach County by a scant 15 ballots, mirroring the razor-thin national vote.

As Trump and Biden fight over battleground Georgia — and many polls show a deadlocked race in once-solidly Republican territory — the race in Peach County echoes the contest across the state.

In interview after interview, residents said their decisions hinged on the president’s handling of the pandemic. The electorate is racially split. And local activists say they’re more concerned with driving up participation among partisans than persuading the few voters whose minds are yet unmade. 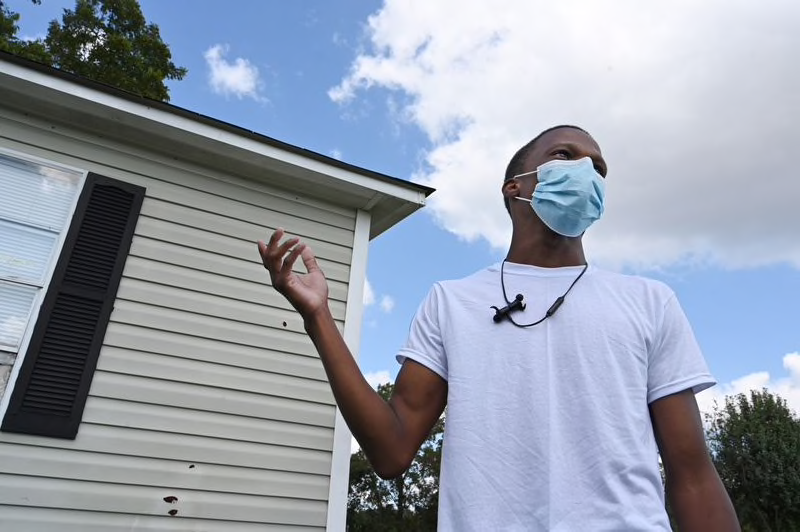 “Most people have had their minds made up since May or June,” Goss said. “It’s all about turnout.”

So was the 2016 race. The county’s population is roughly 44% Black, and turnout among African American voters rose to 73% in 2012 during Obama’s reelection campaign. Four years later, Black voter participation in the county plummeted to 54%, cinching Trump’s victory in Peach.

“That really stood out to me,” said Dave Wasserman, an editor of the nonpartisan Cook Political Report, who recently highlighted Peach County as one of the nation’s most important bellwethers. “It was more about turnout than persuasion.”

Statewide polls this cycle, too, show only a slim number of persuadable Georgians in a presidential contest that could shatter records by drawing about 5 million votes.

“How Peach County votes this year could show how Georgia votes. But it would also be a good indicator of how much rural African American enthusiasm there is,” Wasserman said. “These voters came out before, but turnout is going to be higher across the board this time — and the proportions matter.”

The youngest of Georgia’s 159 counties, Peach was cleaved from parts of Houston and Macon counties in 1924, borrowing its name from the crop that dominates the local economy. Two major peach-packing plants still operate, and drivers in Fort Valley navigate Peach Parkway on their way into town.

Now a county of about 27,000 voters, local races have tightened with each shift. Peach County Sheriff Terry Deese, a longtime Democrat, is running for reelection as an independent against a Democratic challenger. On the five-member County Commission, Republicans hold a 3-2 edge.

Laronda Eason, a military veteran, is challenging a Republican incumbent in a race to tilt control of the county. Though one of the top issues is intensely local — flooding along the county’s main route — residents here sound just as divided over the coronavirus as they do in metro Atlanta.

The Republican commissioners have resumed in-person meetings, often appearing without masks. The two Democrats are participating online until the pandemic subsides. 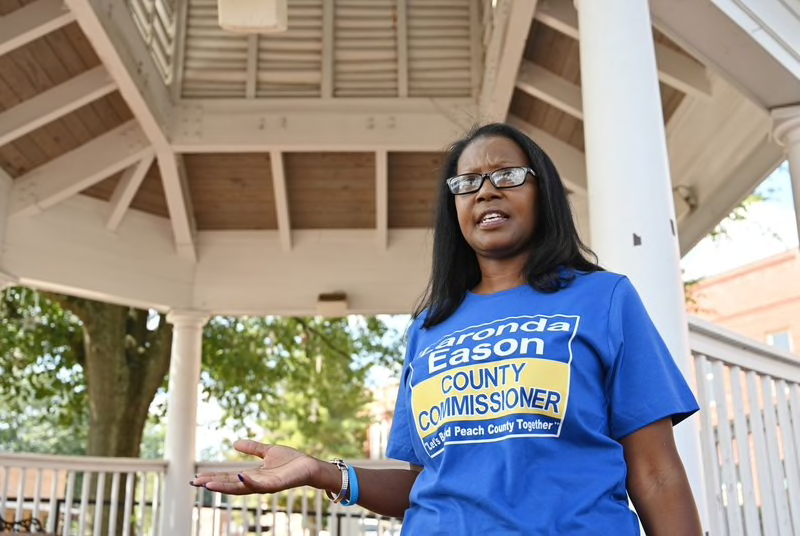 “The pandemic is a very important issue here, but it hasn’t got the attention it needs,” Eason said. “We aren’t really red or blue, we are in the middle. But this year, we may really turn Peach County blue.”

“We’ve had a really good record in the past, but it’s always been a very, very tight race here. But this year, it’s going to be real problem for Republicans,” said Morrill, a retired former president of the local chamber of commerce.

“I’ve been doing this since Moby Dick was a minnow,” he said, “and I don’t know how in the world to predict what will happen.” 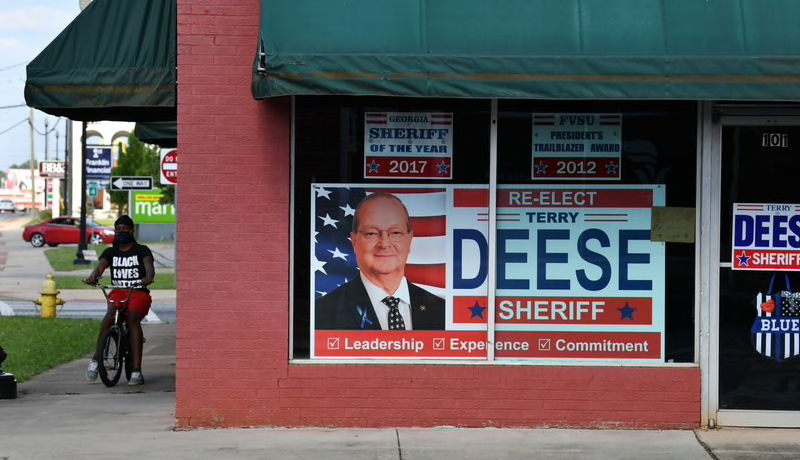 ‘He needs the chance’

If turnout is key in Peach County, early signs point to a sharp increase. About 15% of the county’s electorate had already cast early ballots as of Thursday, according to number-crunchers at the Georgia Votes data site, including about 1 in 5 voters who didn’t participate in the 2016 election.

One of the enthusiastic voters is Shirley Schofield, who stopped to chat after casting her ballot for Biden on the third day of early voting. She predicted a “huge” surge of Black turnout this year.

“We’re concerned that the economy is unstable. We’re fearful because of the coronavirus. There’s just so much uncertainty in the atmosphere,” said Schofield, who is Black. “Will folks still have their job? Will we have a cure? Will they rush a vaccine? It all makes me pressured to get out and vote.”

Republicans promise to be equally geared up. Dennis Wainwright, a tech worker, filled out an absentee ballot almost as soon as he could.

“I don’t like Democrats,” he said. “I already knew from the beginning who I wanted to vote for — and nothing else they could say, or that could come out, even matters.” 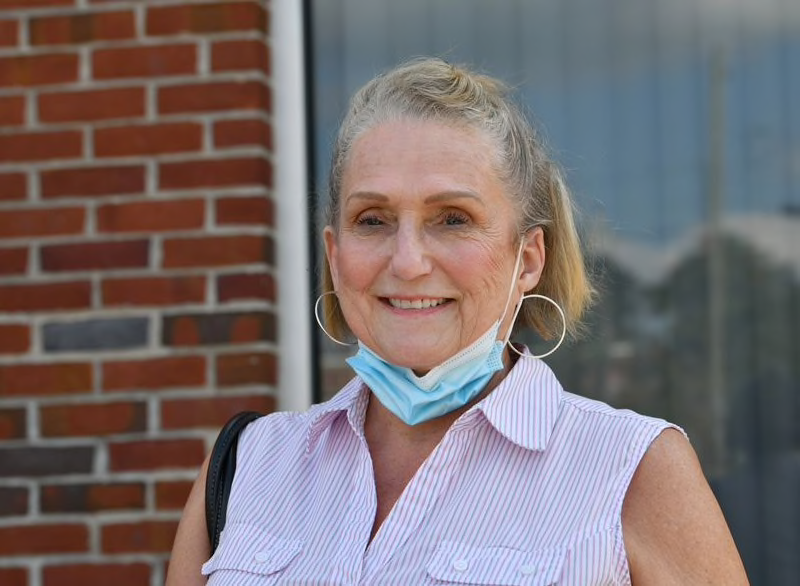 In Barbara Miltner’s neck of the woods, the town of Byron in Peach County’s eastern flank, there’s nary a Biden sign.

“Everyone knows who they’re voting for, and all the people I talk to are enthusiastic about Trump. We know what he’s done for the country,” she said. “He just needs the chance to do more of it without the other side digging at him.”

Ultra-high turnout could have another consequence. Goss reports a number of white Republicans quietly asking him for Biden paraphernalia, a sign of dramatic change in one of the state’s most competitive counties.

“I predict there’s going to be a lot of split-ticket voting,” he said. “You watch — more white voters are going to split and vote for Biden at the top of the ticket and Republican all the way down the ballot. They might not say it, but they don’t think (Trump has) handled the virus well.”