The reduction, which will occur over the next year and amounts to one third of the pilots based at Phoenix Sky Harbor International Airport, does not mean 500 pilots are losing their jobs or that the airline is slashing flights out of Phoenix.

It means that 500 pilots from the former US Airways and America West Airlines will have to move to or commute to other bases for work.

American says 500 of the 1,455 pilots currently based in Phoenix already don’t live here.

The changes, announced late Friday, are due to merger-related shifts in crew scheduling. The company said the move was necessary to make things more efficient, a key goal of the merger.

The three pilot groups, represented by the Allied Pilots Association, agreed on seniority integration in September. Seniority dictates a pilot’s work life, from which base they call home to the type of aircraft and routes they fly.

The Phoenix crew base is most affected because American has decided to spread its A320 trips for pilots throughout its hubs instead of the trips being so concentrated into and out of Phoenix. The Phoenix concentration was a byproduct of US Airways and America West and their A320 heavy fleets. Of American’s 1,435 pilots based in Phoenix, 1,140 are Airbus pilots. 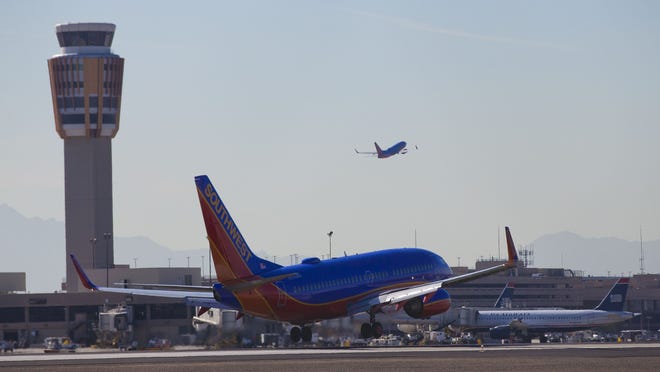 The change will also bring some flexibility and career advancement for Phoenix-based pilots with seniority, many of whom have been locked in to certain routes since 2005, according to an American representative.

American says the changes will be good for senior Phoenix-based pilots because they are able to transfer out of Phoenix flying for the first time since 2005.

On the flip side, the most junior pilots will likely be negatively by the reduced A320 pilot trips originating in Phoenix  because they will have to fly out of another hub, whether they move there or not, upsetting their work and family routine.

“The news here is a bit mixed – we understand that,’’  Kimball Stone, the airline’s vice president of flight operations said in a message to pilots.

Overall, Stone notes, American is growing its pilot ranks, not reducing them. American plans to hire 750 pilots next year, 450 to cover planned retirements given the mandatory pilot retirement age of 65.

The news about the shrunken Phoenix pilot base follows American’s announcement in August that it plans to close its Phoenix flight training center near Sky Harbor, as it consolidates those functions at its Dallas and Charlotte, N.C., hubs.

The biggest loss to date from the merger has been the loss of US Airways’ downtown Tempe headquarters and the relatively high-paying jobs that come with it. The combined airline is based in Fort Worth, Texas, American’s longtime home.

With the three year anniversary of the merger approaching, the new American hasn’t dramatically reduced flights in Phoenix but its passenger numbers this summer were down dramatically from a year ago.

Spokeswoman Polly Tracey attributes that to the airline using smaller planes with fewer seats on some routes out of Phoenix and, in August, an early end to the airline’s summer schedule, which reduced its flying in Phoenix and other hubs earlier than in previous years.

She noted that American has added or announced plans to add service to several new cities out of Sky Harbor, including Memphis, Tenn., and Sonoma, Calif

Southwest, the other dominant carrier at Sky Harbor, also posted year-over-year declines in traffic in the typically busy summer months of July and August, with passenger counts down 4.9 percent and 2.7 percent, respectively.