By Wendell Brock, For the AJC

Growing up in Chattanooga, Jeremy Chambers was much more into barbecue than sweets, but one childhood memory that stuck with him is the glow of the Krispy Kreme “hot” light.

After Sunday church services, if the red neon sign was illuminated, his dad would make a sudden U-turn across a six-lane highway to get the family some doughnuts. “It didn’t matter whose life was at stake,” Chambers joked. “He was going to make that U-turn.” 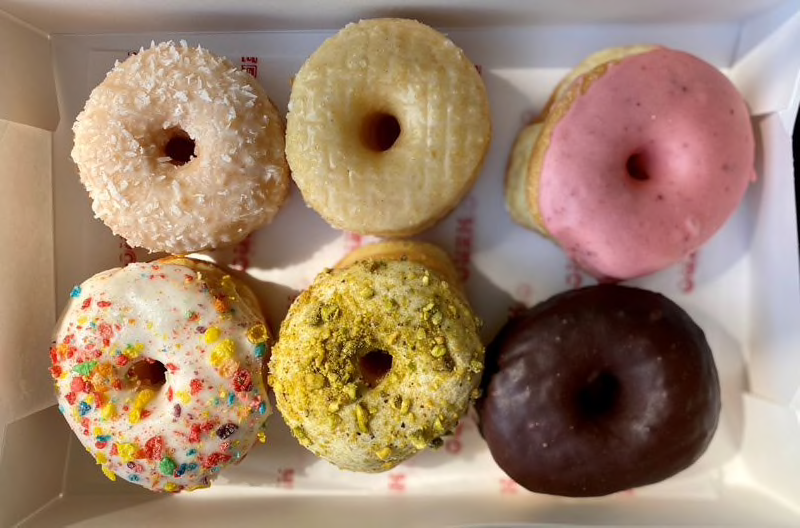 When Chambers met Wil Drake, founder of Birmingham’s Hero Doughnuts & Buns, he discovered they both share warm memories of crashing Krispy Kreme with their fathers. He quickly bought into Drake’s nostalgia for doughnuts, became a partner, and, within a year, opened two more Hero shops, including an Atlanta store that arrived in Summerhill in July.

At Hero, Drake’s buttery brioche is the mother dough for a collection of extravagantly puffy glazed and filled doughnuts; savory, sausage-stuffed kolaches; and loaded sandwiches.

Atlanta is a doughnut-loving town. Now, its denizens can determine whether Hero’s Maldon-sprinkled maple, cereal milk with Fruity Pebbles, or homey original glazed deserve admission into the fellowship of the ring. 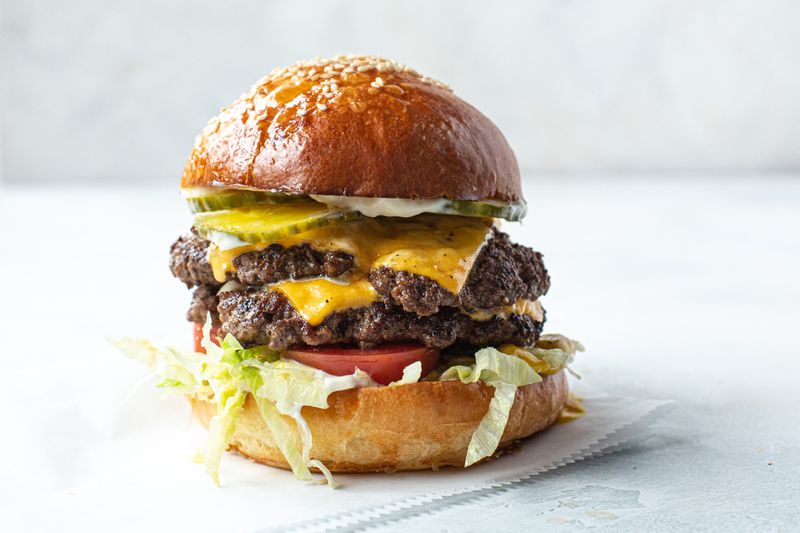 For me, the most noteworthy Hero creation is the Super Crunch: a miraculously tender, stunningly crisp, deep-fried chicken breast tucked between a sesame-flecked brioche bun and moistened with sweet pepper jam and house “cracked sauce,” a mayo-based condiment with a hint of spice and cider vinegar. The classic burger, with lettuce, tomato, pickle, Duke’s mayo, mustard and American cheese, is another dangerously delicious thing stuffed in a bun.

Hero originally had planned to open by the end of 2019, but was delayed by design changes, and then pandemic jitters. It sits next door to the new Hot Dog Pete’s, another project of parent company Pihakis Restaurant Group, owner of the Jim N’ Nick’s Bar-B-Q chain. Hot Dog Pete’s wasn’t part of the original plan, but Chambers thought the corner property would be a swell hotdog stand. When the space became available, his vision was realized, with one caveat: Hero couldn’t meet the demand for hotdog buns, so a deal was struck with Atlanta-based Alon’s Bakery to supply the weenie rolls. 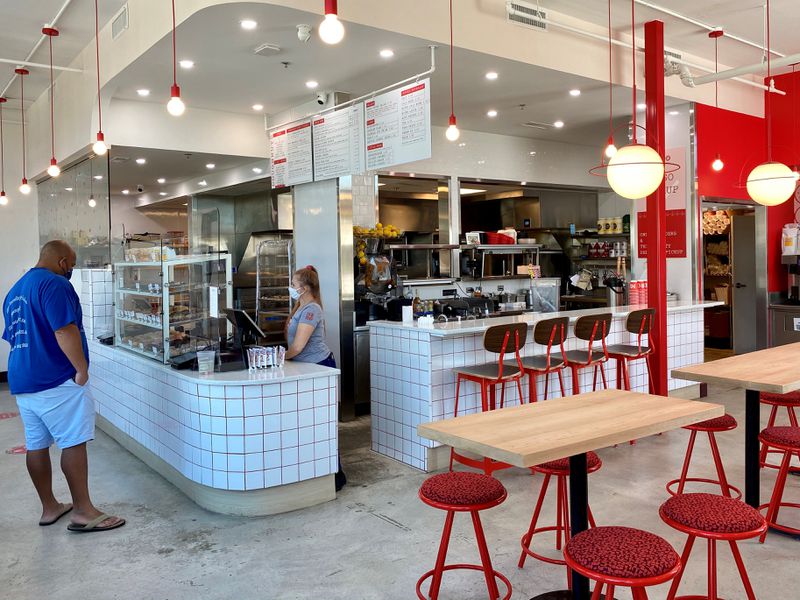 After talking to Chambers, my curiosity was piqued sufficiently to stop by Hero a second time.

From the doughnut case, I adored the strawberry, coconut, pistachio and cereal milk. I’m not the biggest chocolate person, so the chocolate glazed and Boston cream-filled doughnuts were less appealing. The Krispy Kreme-inspired original glazed was good, and a good bit puffier than an actual Krispy Kreme, but I believe it was a little past its proverbial “hot light” prime. Still, I’m not ready to write it off. I also have my eye on the bread pudding doughnut (made with day-old doughnuts soaked in cream, brown sugar and eggs) and the apple fritters. 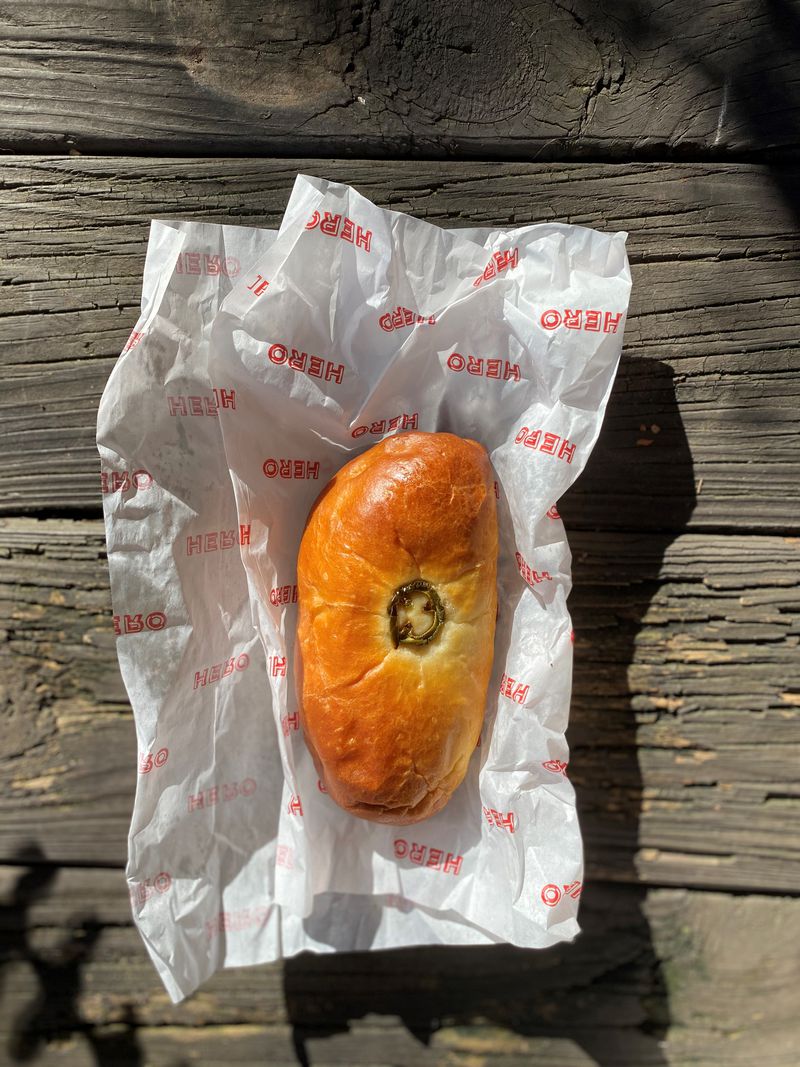 On the savory side, I was real happy with my jalapeño kolache — Conecuh sausage from Alabama swaddled in brioche. An order of Waffle House-style hash browns was so hot it melted a hole in the plastic takeout container. The spuds were unnecessarily greasy, too.

Two $5.49 lunch buns that sounded promising were a bit of a wash: The fried bologna sandwich, with American cheese, horseradish sauce, pepper jam and pickles, was a tad sweet; I suspect the jam was the culprit. Pimento cheese with pickles and Flamin’ Hot Cheetos sounded fun (I love pimento cheese, and I love Cheetos), but it ate like a novelty item: The flavors didn’t coalesce, nor did they complement one another. If I were you, I’d request it without the Cheetos. Or, better yet, go for the Super Crunch. 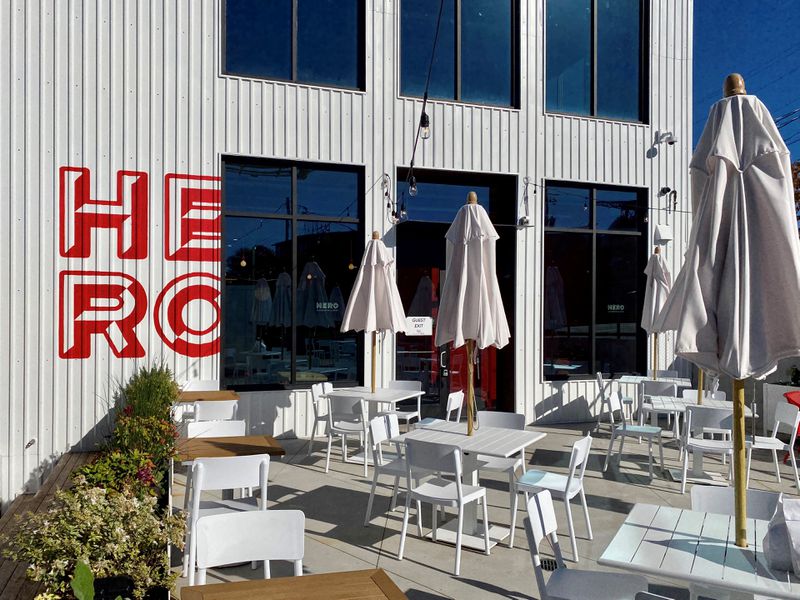 Drake’s doughnuts, while often quite good, aren’t likely to convert the sugar-shy masses — a la Krispy Kreme. But, that chicken sandwich! It’s addictive enough to cause me to make a U-turn.

Alcohol: beer, wine and cocktails for dine-in only

Service options: dine-in, takeout or delivery via UberEats and DoorDash

Mask policy: customers are required to wear them; restaurant will provide complimentary masks