By Shelia Poole, The Atlanta Journal-Constitution

This Sunday, the Rev. Lee May will launch a three-part series on “My God, My Politics.”

The senior pastor of the 100-member Transforming Faith Church, and a former CEO of DeKalb County, has a message, and the timing, he said, couldn’t be more critical.

“I want people to understand that their faith can and should influence their policies, their politics and the way they vote,” said May. “There’s no reason to shy away from that.”

May, 45, grew up in a family that always stressed the importance of voting and understanding the issues on the ballot. And he wants others to understand those lessons as well.

In the past few months, May has joined other DeKalb pastors in voter mobilization efforts such as promoting vote-by-mail as a viable option, voter education and voting protection.

“This election reminds me of 12 years ago in 2008 when we had the opportunity for an African American for the presidency of the United States,” he said. “To me, that was the most important election of my lifetime. The consequences of this election will impact not just the African American community, but the country as a whole. This is just as important for me as it was in 2008. And my prayer is that this is not a one-time event.”

Across Georgia, faith leaders have ramped up efforts to mobilize voters, but because of the pandemic, much of the work has been virtual and through social media. And because many houses of worship are not holding in-person services, they’ve faced the added challenge of engaging congregations without face-to-face conversations. They’ve also had to work with social distancing guidelines and other health recommendations.

“If Christians get involved in the Democratic Party or the Republican Party, it’s going to have an effect,” said Adam Pipkin, executive director for the Faith & Freedom Coalition of Georgia. “We want them to show up at the polls.”

Georgia, which has long been a Republican stronghold, is one of the key states that is considered competitive during this election.

The Rev. Benny Tate is the senior pastor of the 8,000-member Rock Springs Church in Milner, Georgia, which in 2015 was a stop for Sen. Ted Cruz and Mike Huckabee, Republicans who were presidential candidates at the time.

Tate, who counts Sen. David Perdue among his congregants, has challenged people at services and on social media to vote.

“The Black church has historically been interested in Black participation in the democratic process,” said Marla F. Frederick, an author and the Asa Griggs Candler Professor of Religion and Culture at Emory University’s Candler School of Theology. Most black faith leaders “have always wanted Blacks to be fully involved in the process and to have a vote and a voice.”

That resonated especially when Barack Obama ran for president, which Frederick called “a huge galvanizing moment” in the faith community. And, today, ”I’ve heard more than one pastor or leader say how this is the most consequential election of our time and they are really encouraging people to register, to vote early and take someone with them.”

The late ’70s and late ’80s saw the founding of the Moral Majority and the Christian Coalition, which both pushed for conservative social issues.

Recently, more than 100 interfaith leaders around the state co-signed an open letter supporting the candidacy of the Rev. Raphael G. Warnock for the U.S. Senate. The Democrat is one of the 21 candidates seeking the seat currently held by Sen. Kelly Loeffler.

Those supporting Warnock are also using their social media clout on Twitter, Instagram and Facebook to urge others to vote for the senior pastor of Ebenezer Baptist Church.

Faith leaders also want to make sure voters have support once they get to the polls.

The Rev. Cynthia L. Hale, senior pastor of Ray of Hope Christian Church in Decatur, is among ministers who are participating in the “Lawyers and Collars Program,” which is recruiting congregants who are lawyers to be prepared to help voters who are experiencing issues at the polls on Election Day.

For the past decade or so, her church has been designated as a polling place.

“I have been excited about the fact we have seen a record number of churches getting involved in the effort this year,” said Hale.

Mobilization has taken many forms this year.

Neighborhood Assistance Corporation of America, in collaboration with House of Hope Atlanta and other organizations, will provide a fleet of vans to take voters to polling sites in nine counties.

The “Roll-to-the-Polls” vans will leave from House of Hope, 4650 Flat Shoals Parkway in Decatur, every voting day at 8 a.m. to pick up voters and take them to their poll locations throughout the day.

Bishop Reginald T. Jackson, presiding prelate of the Sixth Episcopal District of the African Methodist Episcopal Church launched Operation Voter Turnout in all the churches, which encouraged members to get 10 other people to vote. “The eyes of the nation are going to be on Georgia,” said Jackson. 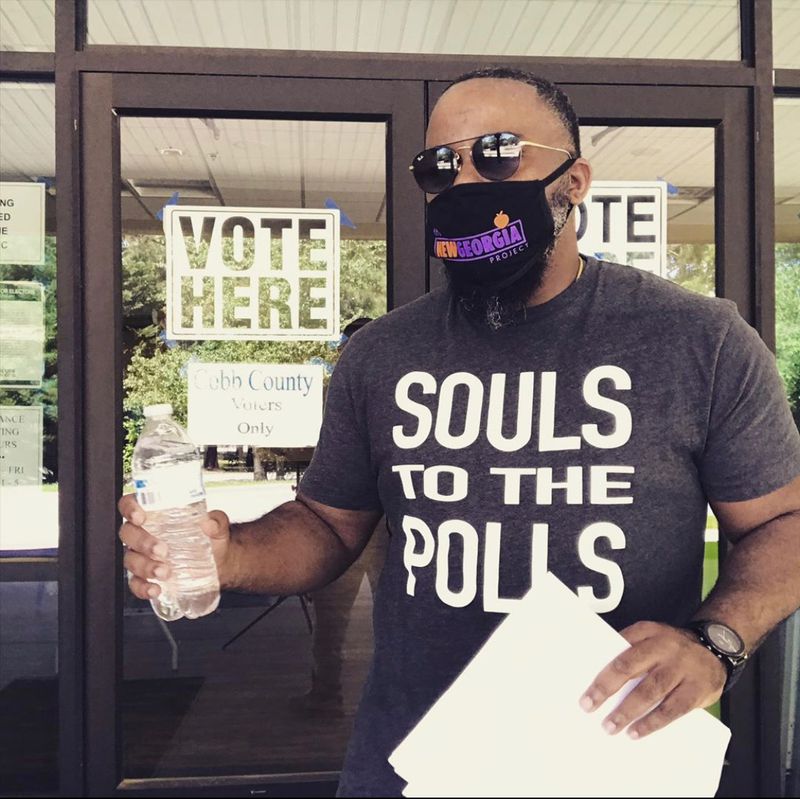 The program encourages people in the faith community to call or text voters to encourage them to vote, and it teaches faith leaders how to use digital tools more effectively.

This year, Honor is expanding the role of the poll chaplain initiative. On Nov. 3, the goal is to have roughly 200 volunteers from various faith traditions to go to the polls to not only pass out snacks and provide comfort, as they have done in the past, but to also fill the traditional role of poll monitors and to defuse tense situations, if necessary.

Among the volunteers is Jonese Austin, a second-year master’s of divinity student at Emory University’s Candler School of Theology.

“Voting is one tool in the toolbox of liberation,” said Austin, a 23-year-old Charlotte native. That’s especially important, she said, “given the current administration and the way some of its policies have impacted people. My faith is intertwined with this need for justice and to help the marginalized and oppressed. It really embodies what it means to love your neighbor.”