‘How about Madam Vice President?’: Harris’ spouse fires back at Perdue during Ga. campaign stop.

But the repeated mispronunciation, which his campaign claimed was not purposeful, competed for media attention with Trump’s remarks in Georgia and led to searing criticism on the airwaves and the campaign trail.

By Sunday evening, Democrat Jon Ossoff said he raised more than $1.8 million from at least 42,000 donors from Perdue’s viral moment. And the #MyNameIs hashtag trended on Saturday as social media users shared the meaning of their names — along with criticism of Perdue.

Among the Georgians who penned letters to Perdue panning his remarks was Kumar Krishnan, a Johns Creek resident who sharply reminded the Republican that voters from diverse backgrounds won’t soon forget his comments.

“Need I say, when you insult someone’s identity, you risk alienating many others?”

Though some of Perdue’s Republican allies steered clear of the issue, others came to his defense. Brandon Phillips, a veteran GOP strategist who was once Trump’s Georgia campaign director, was sitting on the front row at the Macon rally when he heard Perdue’s remarks.

“It was such a fleeting moment it didn’t even register until later when I saw the media and the left trying to make a mountain out of a molehill. Talk about a nothing burger,” said Phillips, who added: “I’m glad Ossoff is raising money from it, though. It’s good for our economy; it just won’t make him Georgia’s U.S. senator.”

Perdue, who has served in the U.S. Senate with Harris since 2017, tried to move past the controversy and shift to a favorite attack line at a campaign stop Saturday in Statesboro. He told reporters he meant “absolutely no disrespect” to Joe Biden’s running mate before jabbing at Ossoff, who is neck-and-neck with him in recent polls.

“My role in this is to point out the differences in what their agenda is and what our agenda is,” he said. “A lot of Democrats will do or say anything right now to hide their radical, socialist agenda.”

Top Georgia Democrats joined the fray. Democratic Party of Georgia chair Nikema Williams called it a “bigoted and racist tactic” borrowed from Trump. And Stacey Abrams, the party’s 2018 gubernatorial nominee, brought it up at a campaign stop in Jacksonville, Florida, accusing Perdue of using “racist tropes.”

Harris’ husband, Doug Emhoff, hit back at Perdue during a campaign stop in Marietta on Sunday.

“Let me help what’s-his-face pronounce this: M-V-P,” Emhoff said. “If he can’t remember her name, how about Madam Vice President?” 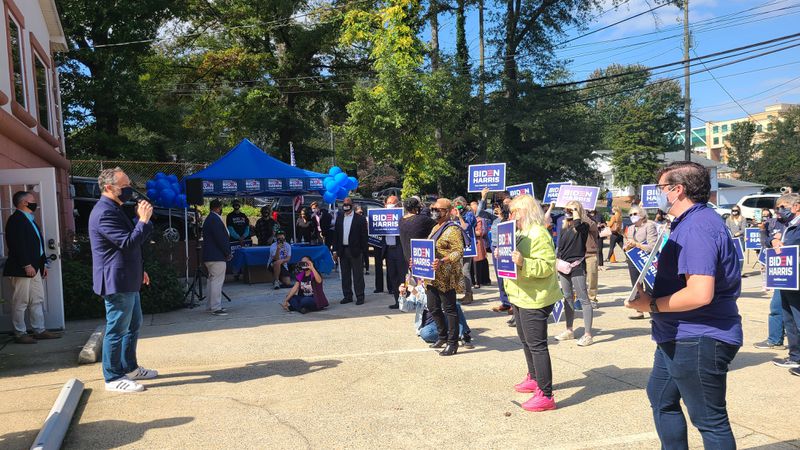 Emhoff stopped in Atlanta and Cobb County to stump for Georgia Democrats and promote the opening of “victory centers” across the state, including offices in Athens, Augusta and Savannah.

Though both Democrats and Republicans have mispronounced Harris’ name — the correct way to say it, she says, is “comma-la” like the punctuation mark — critics say the intentional mangling of her name is an effort to portray the senator as un-American. Harris’ parents both immigrated to the United States, her mother from India and her father from Jamaica.

Marietta siblings Sameen and Munzir Naqvi, who are of Pakistani descent, said Perdue’s purposeful botching of Harris’ name was disrespectful.

“But that’s what their whole thing is,” Sameen Naqvi said at the Marietta event. “They’re against immigrants and immigration.”

“I think as a senator he should have shown more class, but I’m not surprised from (Republicans) with the rhetoric that they’re doing,” he said. “They’re playing the fear card with the people, trying to play on people’s emotions in a very ill-intended way.”

Krishnan, who runs an energy consulting firm, said such stances on non-white candidates have become the norm with Republicans.

“Clearly, it’s not a mispronunciation. It’s pandering to a certain segment of society, and it’s time our elected officials understand if you insult someone’s identity you reject a larger group.”

The fallout, meanwhile, has continued unabated on social media — even damaging innocent parties. Critics of the former Fortune 500 chief executive hounded the Twitter account of Perdue Chicken, a poultry giant with no direct ties to the Georgia lawmaker.

“I can assure you that David Perdue has no affiliation with the Perdue brand,” read the company’s responses.