Mesa police officials are asking for the public’s help in identifying a drive-by shooter who opened fire on a food truck seating area near Dobson and Guadalupe roads Friday night, injuring seven.

In a media briefing Saturday, Mesa police Chief Ken Cost said an unidentified person in a white Kia Soul or other box-shaped SUV was traveling west on Guadalupe Road when the vehicle stopped in the roadway and shot into a crowd of people eating outside food trucks in the parking lot. Seven people were wounded, including children aged 1, 6, 9 and 16 in addition to three adults.

The 1-year-old child remained in extremely critical condition on Saturday. Cost said the other injuries range from minor to severe, but none was believed to be life-threatening.The children were from multiple families.

In addition, multiple bullet holes were found on the vendors’ canopies, their cooking equipment and on the outside of businesses surrounding the food vendors. One of the vendors returned fire, but it is unclear whether the vehicle was struck. Cost said the car then headed west on Guadalupe Road into Tempe. 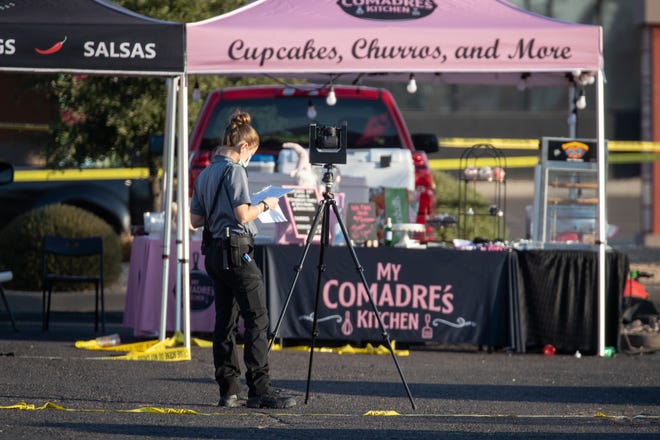 Cost noted that a man was seen assaulting a woman at the same location earlier in the night. One of the food vendors and other bystanders intervened and broke up the fight. The man and woman “left the area quickly after they were confronted,” police said.

Investigators haven’t tied the incident to the shooting, but Cost said they have not ruled it out.

Police continued to canvass the area and search for nearby surveillance footage on Saturday.

Cost said police are looking for “anyone and everyone” who may have witnessed the fight or the shooting to contact police, calling for any details, videos, photos or anything else that might help investigators.

“They crossed the line. They shot children and it’s unacceptable,” Cost said. “You need to come forward and do the right thing.”

Anyone with information is asked to contact the Mesa Police Department at 480-644-2211.