While New York City inspected every school building for proper ventilation this fall before reopening schools, the Arizona agency legally mandated with inspecting schools took no action to inspect ventilation systems amid the pandemic.

And while teachers and students are returning to schools, the agency’s inspectors have not.

The School Facilities Board paused inspections as the pandemic began in March, according to agency Spokeswoman Megan Rose, even as fears over ventilation issues rose.

State law requires that the School Facilities Board inspect all district school buildings once every five years for building deficiencies and conduct preventive maintenance inspections at 20 randomly selected districts every 30 months.

The agency previously inspected just one school for building deficiencies in three years, even though state law requires regular inspections. After The Arizona Republic reported the agency’s failure to inspect in 2019, the School Facilities Board resumed inspections, inspecting four districts from August 2019 to February 2020, according to Rose.

The lack of action from the state leaves districts largely to fend for themselves in handling building ventilation issues. Some districts have worked to upgrade HVAC filters. In some cases, even parents are intervening, donating the funds to improve air quality in classrooms.

Hundreds of repairs are needed in schools’ aging systems across the state. The School Facilities Board is the state agency responsible for handling many school building repairs. Lawmakers send millions every year to cover those repairs, but the problems outstrip the funding.

Clark Vangilder, a science professor at Central Arizona College, examines ventilation issues in schools. “Literally moving more fresh air inside,” he said, is key in helping prevent the spread of COVID-19, as schools begin to reopen.

“If we were doing that, then we probably would not see the amount of community spread,” he said.

Many Arizona school buildings are aging, with antiquated HVAC systems that can’t function with modern filters that do a better job at preventing virus spread.

The agency is working to fast-track projects, Rose wrote in an email. The School Facilities Board has approved 284 HVAC-related projects for schools since March, worth $7.4 million. Repairs are not contingent on inspections; schools are responsible under the SFB’s system for identifying problems in need of repair and applying for money.

Vangilder said studies have shown that children score better on tests with higher outdoor air ventilation. In Arizona, when opening a window may bring in too much hot air, HVAC systems do the job of bringing in outdoor air.

Letting fresh air in a room improves ventilation and helps mitigate the spread of COVID-19. HVAC systems circulate fresh air a few times an hour — The more air exchanges an hour, the better the ventilation.

Vangilder said this science has proved correct in the case of tuberculosis outbreaks in Japan.

“Just taking the air out almost as fast as it’s coming in … doing these huge air changes: Poof,” he said. “The transmission almost went to zero. The evidence for this is overwhelming.”

New York City’s school system has about 1,700 schools, compared with Arizona’s 2,200. The city announced an effort to inspect every school for ventilation issues before reopening the buildings for in-person classes, as teachers raised concerns over safety. Ten buildings were shut down for ventilation repairs, according to the New York Daily News.

Schools did receive money to cover pandemic expenses through the CARES Act, but ventilation upgrades compete on a school’s list of priorities with personal protective equipment and technology needs.

The responsibility to inspect

Older reports posted online show that the state-mandated inspections occasionally found school HVAC systems in need of maintenance. In one district, units were 50 years old. In another, CO2 levels were high.

Rose wrote that Arizona’s school governance is structured different from New York City’s, which operates more like a school district. Arizona is a local control state: Phoenix alone is home to dozens of different school districts and charter schools.

The School Facilities Board is working with schools on conducting virtual inspections,she wrote.

The School Facilities Board was the subject of a scathing state audit last year, citing significant delays to projects and the inconsistent inspections.

The Republic requested an interview with Tobin earlier this month, but he did not respond to schedule an interview.

How districts are tackling HVAC issues

While the state took no action to inspect ventilation systems amid the pandemic, individual school districts did, at varying levels. Vangilder worked with the Casa Grande Elementary district to improve ventilation. The district is purchasing 445 air purifiers, for $193,862.

In Mesa, officials replaced about 311 air-conditioning units over the summer, according to Scott Thompson, assistant superintendent with Mesa Public Schools. The district spent about $8 million on the project using bond money raised by local property taxes. Thompson said many of the older AC units in the district don’t qualify to be replaced with funds from the School Facilities Board.

“A lot of our AC units are aging,” he said. “They’re not running, as well as we’d like or they struggle to keep the room cool.”

He added that the district had to balance funding for improved ventilation with other district needs, like protective equipment for staff members.

In some schools, parents are taking action.

Adriana Saavedra and her husband donated 12 new air purifiers for all the rooms in her daughter’s school in Pinal County in the Mary C O’Brien School District. In-person learning began in the district on Sept. 28, as spread of COVID-19 declined in the area.

Saavedra loves her daughter’s school. But, she said, to send kids back to school, parents, educators, students and school leaders need to take preventive measures, like wearing masks and improving ventilation.

“With everybody doing the right things, you probably could return to some sort of normalcy,” she said. 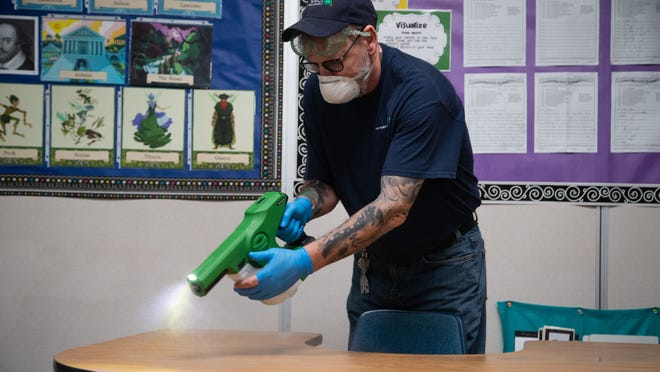