Citizens across America are proving that the country is not as hopelessly divided as the headlines may lead one to believe. USA TODAY Network reporters are bringing forth examples of how citizens are working across perceived divides to address differences between conservatives and liberals, promote listening to neighbors with opposing views and to solve issues such as racial inequities and gun violence. The USA TODAY Network is reporting on these “Strange Bedfellows” as part of Hidden Common Ground, a key component of USA TODAY’s unique local-to-national coverage of the 2020 presidential election.

There was opportunity for this one to get political: eliminating the words “Robert E. Lee” and “squaw” from two Phoenix street names.

But on a City Council with gaping philosophical divides, in a nation often polarized over how to move forward from its racist history, the Sept. 16 vote to rename Robert E. Lee Street and Squaw Peak Drive was unanimous — four Democrats, three Republicans and two Independents with liberal ideals all voted ‘yes.’

The word “squaw” is considered a derogatory term for American Indian women. Robert E. Lee was the top Confederate general.

“Is this a name you would want in front of your daughter, your sister and even your mother?” Republican Councilman Sal DiCiccio said about the word “squaw,” before the vote. “The answer is no. You wouldn’t want that. So why would you want that on the street?”

“The street names don’t match the values of our community,” Gallego said.

Phoenix is among several cities to recently remove racist or offensive markings or monuments in public places as advocacy groups call for these changes and others nationwide.

In Phoenix, DiCiccio, one of the most conservative members of the council, is normally quick to take to Twitter to criticize liberal movements.

The street sign renaming wasn’t a political one for DiCiccio, though. He called the street names “extremely offensive” and “derogatory.”

“We probably all had different reasons for voting to rename Robert E. Lee St and S Peak, but some things still transcend politics,” DiCiccio said after the vote. “For me, this one was easy, I asked myself, ‘Am I OK with my daughters hearing (the word Squaw), and seeing these things legitimized, and the answer was ‘no’.'”

Another Republican council member, Jim Waring, said his “yes” vote was meant to signal that he was now OK with the process.

He disagrees with the city’s 2017 policy change that allows the council to change street signs without a vote of approval from property owners on the street, since those property owners must pay to change their official documents.

But in the street sign change the council approved in September, the council agreed to reimburse the residents for all costs.

“(The street sign) was inevitably going to change,” Waring said. “It didn’t matter what I said about it … I wanted the residents to be covered, no matter what.”

Councilmember calls for more to be done

For one council member, Independent Councilman Carlos Garcia, this change is only the start of what the city should be doing to help minority groups.

Garcia said at a July council meeting that he hopes the council starts “looking at policies that actually change the daily lives of indigenous people and particularly indigenous women,” and does more to respond to the demands of Black Lives Matter.

For now, on this matter, the council found common ground. 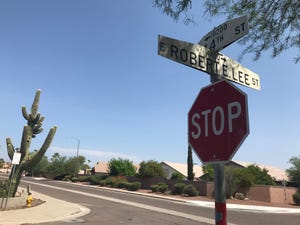